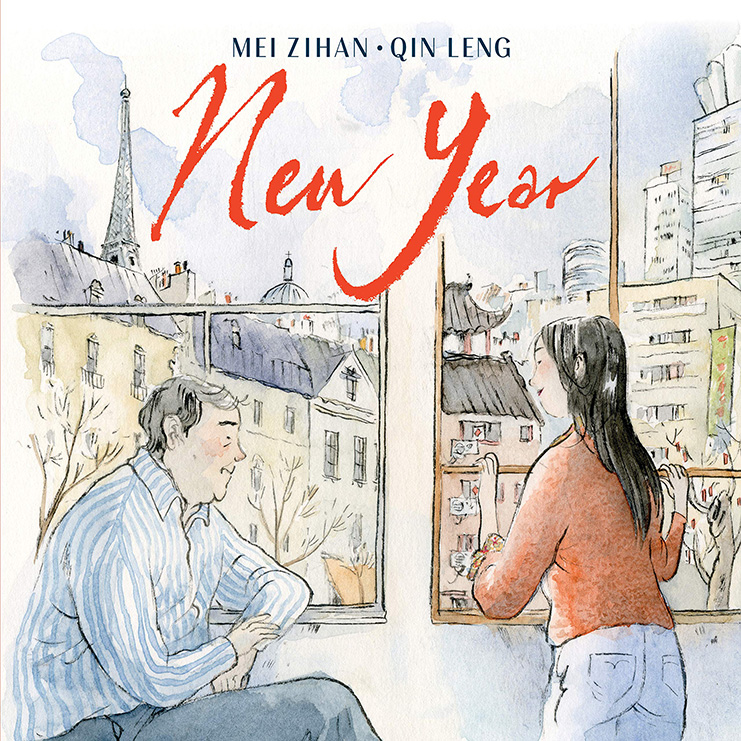 The joyous celebration of the Lunar New Year, observed in different countries throughout Asia, as a multiday holiday, is the most important time of the year for families to get together. The origins of the Lunar New Year festival are thousands of years old and are steeped in legends. These days, typical festivities, include religious ceremonies honoring ancestors, spring cleaning of houses, dances, parades, fireworks, special foods and red envelopes with money for children for good luck. In some parts of Asia, the celebration concludes with the Lantern Festival. These books will help your kids ring in the Year of the Tiger! 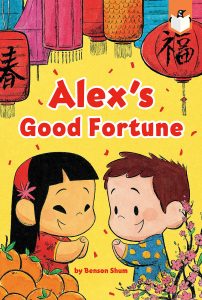 Alex is very excited about the Chinese New Year. On the morning of the festival, she wears her traditional red costume and headband and invites her closest friend, Ethan, to share her holiday with her. Together, they participate in the dragon dance and parade, which Alex explains brings good luck.

At the family gathering later in the day, the kids are delighted with the money inside their red envelopes. They learn to use calligraphy to write the Mandarin characters to wish everyone peace all year round. Traditional foods representing various wishes for the holiday are eaten, such as fish for prosperity, noodles for a long life, dumplings for wealth, and dried fruits and nuts for good fortune. The timeline is compressed in this story to show the final Lantern Festival as well.

Throughout this colorful book, the color red is prominent to wish the children in the story and those reading, good luck and happiness. The joy on everyone’s faces is sure to delight little children and early readers. The book is very informative about the holiday traditions and symbolism while also telling an engaging story. 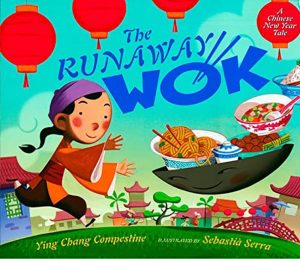 It is New Year’s Eve, and Ming Zhang’s parents send him to the market to trade their last eggs for a bag of rice to share with their neighbors. Even in their poverty, they think of others. Ming is sad that his parents have been cheated by their wealthy employer and his family can’t have a grand celebration. When he spies a rusted, handle-less wok, he is reluctant to part with his eggs, but the wok sings out to encourage him to do the trade. Ming thinks this wok is magical. “If it can sing, it must be able to do other amazing things.”

At first, Ming’s parents are saddened by Ming’s decision, but seeing the wok sing “Skippity-hoppity-ho!” and roll away, they are stunned and, suddenly, very hopeful. The wok returns brimming with delicacies, and the grateful Zhang family sets up a feast. After the wok has been emptied, it rolls out again and again returning with delights. The Zhang family are overjoyed with their good fortune. But in their plenitude, they have not abandoned the poor people of Beijing and share everything to their heart’s content.

With busy artwork full of the most wonderful, minute details and complex emotions on people’s faces, Serra has constructed a complimentary story to Compestine’s story. This book is sure to delight older children. 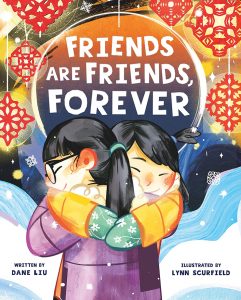 Dandan and Yueyue are best friends. On New Year’s Eve, they enjoy the snow and each other’s company. Tomorrow, Dandan and her family are moving to America, and she is storing up every memory of today to take with her forever. From Nainai’s dumplings to Yueyue’s icy red paper cutout ornaments, Dandan is fiercely determined not to forget anything. Through her own sorrow, Yueyue gives Dandan a gift of red paper and string to share with the new friends she will make. Friends are indeed friends forever.

But everything is strange in the new country, including the language. Dandan finds it hard to make a friend, someone who will share secrets with her and make red paper cutouts. But then, on her birthday, she makes a friend, and the joy in her heart is uncontainable. It took a whole year, but she delights in sharing the New Year festival with her new friend.

This is a true story based on Liu’s own immigrant experience. She shares the heartrending impact of immigration on friendships and also the joy of sharing friendships with people of other cultures. Working in vibrant mixed media, Scurfield has the remarkable ability to emotionally immerse the reader in the scenes the story unfolds in. This is a book for children of all ages. 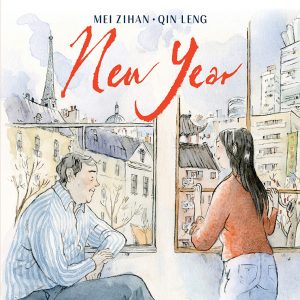 This story moved me to tears. Written and illustrated with such tenderness of story and sensitivity of audience, it is an example of the magic that happens when artists know how to express emotions beautifully. Leng’s illustrations are spare, with plenty of white space around them, which Zihan fills with his protagonist’s emotions through his evocative words.

Meant for children ages ten and up, this story is a father’s lament at being parted from his precious grown-up daughter on Lunar New Year, a festival of family togetherness. This story will be especially meaningful for families separated by the pandemic, where every celebration is intermingled with sorrow and loss.

His daughter grew up so quickly. And then, she was gone. Far away to another land, and he was left alone in Beijing. He is proud of his daughter’s life in Paris. But seasons go by, and she does not come home. While she could spend her new country’s festivals abroad, why doesn’t she return to him for the Chinese festivals? Especially, the most important Spring Festival and share in the grand feast, which brings good fortune. Does she make the traditional foods in her small kitchen in Paris? Does she share her culture with her French husband? Such questions circle his mind as he remembers spring festivities of years past.

Then he visits her and sees her in her element in her own world. And then, he understands. He understands that if she returned to him often, it would make her feel as if she hadn’t grown up at all, as if she doesn’t have what it takes to be independent. She had to leave home in order to grow up to live the life she was meant to live. He is full of pride for the life she has made for herself and realizes that she belongs where she is. She is now Chinese and French.

And yet, on New Year’s Eve, at his home in Beijing, he still longs for her.