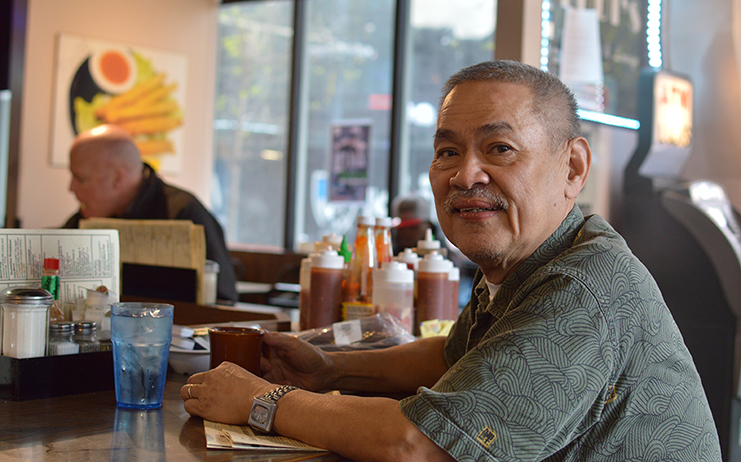 Ludi’s Restaurant and Lounge, a diner dating back to the 1930s and one of the only places serving Filipino food downtown, is closing in its current location at the end of August.
The restaurant’s 17-year lease is up, and will not be renewed, as the building owner and management don’t want to keep a restaurant in the space, said Gregorio Rosas, who has owned the business since 2001.

In a letter to customers, printed out and posted around the restaurant, Rosas wrote that “it has become painfully difficult for small businesses like ours to find affordable places to rent.” Rosas is looking for a new location for Ludi’s with the help of a broker. He hopes to move Ludi’s somewhere else in the heart of downtown Seattle.

A recent Facebook post about the closure from a Seattle resident, which was shared 146 times, blamed it on corporate greed. But Rosas said this is not the case; his landlord wasn’t raising the rent. “Rent was so affordable that I lasted 17 years. I wish I had 10 more years,” Rosas said. “He’s a very good landlord and I hope I could find another landlord like that. It’s hard to say because downtown, money talks.”

Ludi’s is located below a parking garage, and Rosas guesses the company that owns the building wants to build more parking for the newly-remodeled State Hotel across the street.

Rosas has worked at Ludi’s for over 40 years, starting in 1978 as a dishwasher. “In a way I’m sad, because this is my life, but at the same token, I don’t have any bad feeling,” he said in an interview at a diner’s table during breakfast time. “Whether good or bad there’s always an end to everything.”

For years, Rosas has woken up at 5 in the morning, come to the restaurant, and stayed until 5 in the afternoon, rarely taking time off. “Day in, day out, sunshine, rain, snow, because that’s how much I have a joy of running this restaurant,” he said. He has 18 employees, many who have worked here for years, some for decades.

Rosas grew up in a poor family in Manila in the Philippines. After spending his childhood working as a houseboy there, he was brought to the United States as a teenager by an American couple whose vacation home he worked at.

Soon after arriving in the U.S., Rosas started working at Ludi’s restaurant as a dishwasher. Then it was an American-style diner called The Turf, and already had a community of longtime customers. When The Turf’s owner died, she bequeathed the business to Rosas.

After the interview, a regular customer could be heard praising Ludi’s as the only place to get lumpia.

People have been coming to Ludi’s for decades, Rosas thinks, because of the good prices, location, and friendly service.

Across the street at the State Hotel, coffee costs $8 dollars. “And I charge three dollars, with toast,” Rosas said. “So obviously they’ll come here.”

Ludi’s often serves people experiencing homelessness or struggling with substance abuse. “We are a business for everybody. You can be rich, poor, underprivileged,” Rosas said.

Rosas remembered recently celebrating his birthday at the hotel across the street. “The people that come to my restaurant, they’re just outside looking in, and obviously they don’t feel like they’re welcome in a good place,” he said. Not that Ludi’s is a bad place, he adds.

“But maybe tastefully, it’s different from the hotel that charges $8 dollar coffee.”
George Peterson, a retired Boeing engineer, has been coming to the restaurant almost every day since the 70s. “You couldn’t ask for a better place to eat than this place right here,” he said, over breakfast of eggs and pork. “It’s just like a home atmosphere.” Rosas’s family and the employees at Ludi’s have become his longtime friends. He compares the home-like atmosphere in Ludi’s to the TV show Cheers. The staff have a playlist of Peterson’s favorite soul and country Western music for when he comes in.

Over the years, some older longtime customers have passed away. When this happens, Rosas puts a notice or picture of them on a board, Peterson said.

“I’d really hate to see this place close down,” Peterson said. “It’s gonna be quite a few people I think that’s gonna miss it.”

The closure is difficult for the customers. “People are sick about it, they don’t want us to leave,” said Danna Decaro, taking a break from drinking a beer and watching the game after her afternoon shift as a bartender. Decaro has worked at Ludi’s for four years, has been a customer at the restaurant and bar for decades, and has gotten to know the customers and staff well. When she started working at Ludi’s two days a week at age 67, she was “basically retired,” but now works at Ludi’s five days a week.

The closure is sad news for the employees too, she said. “I’m of an age that it’s not easy to go out and find a job in this business, and I’m just gonna miss it,” Decaro said, her eyes welling with tears. “For me it’s an end of an era.”

Decaro said she would “absolutely” continue working at Ludi’s if it finds another location downtown.

Seattle drag personality Aleksa Manila was sad to hear about the closure. “I hang on to this idea that Ludi’s will always be there anytime I have a craving for Filipino food and I have a craving to be filled with Filipino love,” Manila said. “I’m surrounded by English-speaking folks, so any time I get to speak my native tongue, it brings me back home. It’s hard to explain that feeling.”

To Manila, Rosas is Kuya Greg, meaning “big brother” Greg, a Filipino term of endearment and respect. “He is like everybody’s uncle,” Manila said. “With the Filipino food comes that Filipino family value.”

Manila sees connections between places like Ludi’s and the poisonous rhetoric around immigrants and walls. Ludi’s is a cultural institution that truly makes America great, Manila said.

Rosas is looking for the right location for the right price, most likely somewhere that had been a restaurant before, to save on costs. “If there’s a chance we can move to another location, I’ll go for it, as long as it’s still affordable,” Rosas said. “There’s a lot of ‘ifs.’”

Though he is sad about the closure, Rosas said he has no regrets. “I think the best part is when you have a joy, it makes you go home accomplished. It’s not all the money I made, but what you accomplished in so many ways. You were able to provide paychecks for 18 people,” he said. “Some people think I’m crazy to be here, but when you enjoy things it makes you stay longer.”