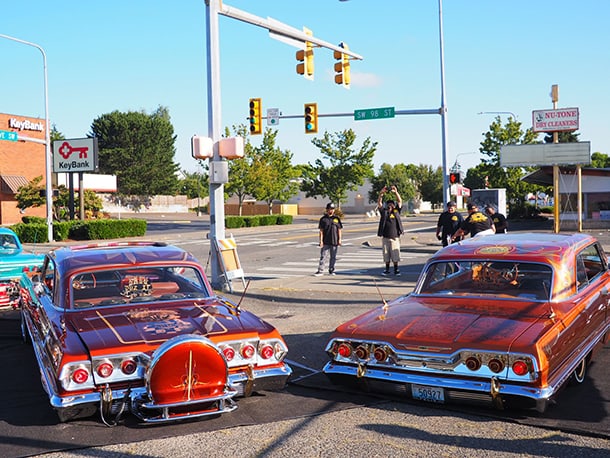 Over the last decade, Eazy Duz It CC has grown from a small group of friends with a shared passion in American classic cars into a nationally renowned organization that has helped carry the Pacific Northwest lowrider scene on its back, and in the process, mobilized people from all walks of life who do not necessarily dabble in custom cars but feel a sense of community through it.

“Many car clubs have a hierarchy or structure, which consists of president, vice presidents and so forth. We didn’t want that, so teaching ourselves to be leaders will help all of us put the best lowriders out as well as be responsible citizens and contributors to the community.”

While community has been a major part of the club’s mission, Sanh acknowledges that at the heart of its credibility and reputation is the ability to build quality cars, often citing quotes like, “Built not Bought,” or the line made famous by lowriding legend Joe Ray of Lifestyle C.C. and CEO of Lowrider Magazine, “Pay the chrome bill before the phone bill,” as a way of life.

One way the club has been able to sustain the ability to build and debut cars at such a high output is taking an “it takes a village mentality” approach. As opposed to paying for work to be done, they keep it in house by trading services.

“We’re going back to the old barter system, the old way of human interaction…I tell people the way the club works and they’re shocked…” said Sanh.

Different members have different skill sets and it is through the dependence of all members to barter their skills with each other that enables the club to produce on a high level.

A prime example is a 1964 Chevrolet Impala that debuted in 2016 named Mission Impossible. What would usually take years took 11 months to build wouldn’t have happened without the full support of the whole club.

“It’s not easy, you can’t do it by yourself…you need everybody, like a family,” said Sanh.

Originating in Chicano communities following World War II, the lowrider culture, in which automobile profiles are lowered and then raised by a hydraulic setup, has come a long way from its beginnings in Southern California.

By the 1970’s, the lowrider culture had begun to make inroads into mainstream America, by way of cinema, including Cheech & Chong’s Up in Smoke and Boulevard Nights. Since then, lowriding has become a mainstay in American pop culture, a fixture in hip-hop videos among other media, becoming a subculture in its own right.

White Center Jubilee Days is one of over 70+ Seafair sanctioned events in and around Seattle that occur during the months of July and August. Founded in 1923, Jubilee Days now includes a street fair featuring vendors and food trucks, a main stage and beer garden, a parade, a carnival, and a car show which is now run by Eazy Duz It C.C.

“We got put on because Joe Patron put us on,” said Sanh. Joe Patron, a local lowrider legend, helped run the car show in years past and saw it fitting to hand it off to a new guard of lowrider enthusiasts.

“We saw it as a good opportunity to help [the community],” said Sanh.

Eazy Duz It’s standing and impact in the community helped make White Center Jubilee Days a success with the car show as one of the most highly trafficked parts of the festival, so much so that day of event participants who wanted to enter their car into the show had to be turned away before noon during last year’s event.

“We ran out of space for them,” said Oliver Little, one of the main event organizers, commenting on the success of Eazy Duz It’s first year taking the reins of the car show portion. “We are going to have to give them an entire extra block.”

This year, that extra block was filled by 10 AM.

In the future, Sanh hopes that the club’s continued evolution can drive people in government and elected officials to see community organizations like Eazy Duz It as a conduit into grassroots level community building and civic engagement. “A lot of people [car show attendees] on social media were like, ‘Thank God, thank you for this show, this [lowrider] community…’ imagine those guys were voters… they [elected official] could really do it [connect with people] if they really reached out.”

White Center sits in the highly diverse 34th legislative district, which is in the midst of one of the most intense primaries; over 10 candidates are vying for the seat of long time State Senator Sharon Nelson who is opting not to run for re-election.

Each year, the club throws an annual appreciation BBQ for the many family and friends that spend their time helping throughout the year. Going into its ninth year, the event is held at Alki Beach and has evolved into an unofficial car show with the full stable of cars lined up along Alki Ave S.

While this event is meant for family and friends, it attracts hundreds of onlookers who descend on Alki Beach on a hot summer day, many caught off guard by the beauty of American classics spanning a couple city blocks each summer. This event is also used to recognize members for their hard work through awards and to welcome new members and their families.

“I know for sure he did it for more of a bonding, positivity. He was always mischievous… getting into trouble,” said Angelique Ha, whose partner, Demitri Dolan, recently joined the club.