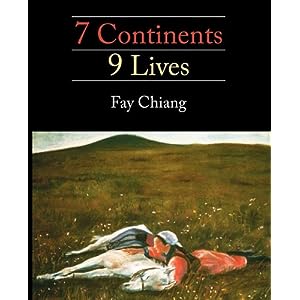 Love can be found in the fidelity to daily details in “7 Continents 9 Lives” (Bowery Books 2010), by Fay Chiang, a genre-defying collection of poems, prose poems, journal entries and dramatic monologues that includes work from the poet’s previous two volumes published by Sunbury Press. It’s a brave, beautiful, compassionate, harrowing, imperfect and impossibly generous piece of work. Chiang, an activist in the multiethnic communities of New York City’s Chinatown and the Lower East Side since the 1970s, has composed the poem of a fulsome life.

The volume’s personal narrative tells of her family’s immigration from Southern China and Singapore to Chinatown; it encompasses the diasporic Chinese communities in Italy, Germany and throughout the world. The poems recount Chiang’s travels and, through her good ear, capture the voices of working women, interlacing the narrative with their stories. Among the finest poems are the deft portraiture of women, including “Mrs. Oltrani” and the two grandmother poems, “Orchard Street” and “Grandma.” The latter ends with the stunning close, “We continued our walk, admiring the peaches and apples hanging in other people’s gardens,” as good an image of envy and otherness in America as I’ve ever read.

Chiang mourns the deaths of her father and her brother’s Hodgkin’s disease, mental illness and suicide. In the poem for her brother Peter, “Tall Grasses Rippling in Wind”—what a lovely title!— she writes, “past tomatoes /fallen off the vine / too soon,” that becomes a prefiguring of his premature “ripening.” Chiang recounts her own experience living with stage IV breast cancer, while in “David” she laments the state of the health care system and the condition of cultural silence by describing an HIV-positive client’s passing. What saves the narrative from utter grimness and despair is the poet’s remarkable understatement and acceptance of mortality. I’m reminded of essayist Richard Rodriguez’s comment that AIDS had somehow “Mexicanized” San Francisco in its confrontation with a generation’s death. Chiang has envisioned a future in which “You tell me, / Buddha said, / There is no heaven,” even imagining her own departure, saying, “No I could not bear this,” that is, the well-rehearsed rituals of yet another Chinese funeral and wake.

In “Midnight Blue Sky,” the poet contemplates her own suicide, but is drawn back by the awareness of change, the lightness of a Coney Island beach scene, the anti-nativist observation that “Each wave of newly arrived immigrants gracing these shores, the cold steel blue Atlantic, would settle and fiercely claim the city as its own.” In place of a politics of polarization, Chiang offers a poetics of inclusion, hence hope. In “Magic,” the poet observes the ways in which children, including her own daughter, reawaken adults to the loving details of the world, in “practicality and shrewdness.” The wonderful short lyrics, “Landscape” and “Home,” have the economy of Chinese and Japanese poetry, and a wistful ancestral longing.

The poet’s voice is conversational, accessible, deceptively simple and unadorned, modest, and sometimes raging, especially in the early poem, “Chinatown,” with its withering critique of the American culture’s homogenizing effect: “american tv sold mickey mouse and donald ducks / to little dick and janes and run spot run / in the suburbias of white picket fences / and automobiles.” But by and large, hers is a storyteller’s voice. Formally, Chiang favors a shorter line that isn’t often justified along the left margin but broken along the page, signifying movement. The collage of genres recalls Jean Toomer’s classic Cane, which also ignored or transcended questions of genre and convention.

The autobiographical narrative often circles and backtracks, so that “Journal Entry Jan. 1, 1975” describes her father’s death, while “Autumn Dusk,” which follows immediately afterwards, fictionalizes a conversation between father and daughter that remained unsaid during his lifetime. The latter poem gives itself over to the father’s elegiac voice: “in this light /in this autumn light / this September.”

There’s a satisfying wholeness to Fay Chiang’s “7 Continents 9 Lives”, the arc of an active and conscious life. If I were to identify a single quality that marks the poet’s perspective, it would have to be full acceptance and inclusiveness: working class communities of color, lesbian, gay, bisexual and transgender people, those living with HIV, cancer or mental illness, the dispossessed, artists and creators as a force for social change. In the first section of “Images,” for example, the poet paints a carnivalesque scene on St. Marks Place in the Lower East Side in which she encounters an “old woman in raggedy coat and kerchief” who proceeds to tell her that she’s an artist-nun who sang “Jesus light my fire in a lesbian bar.” The story is told without irony, grotesqueness or meanness, but with a common laughter; Chiang’s level, democratic gaze restores the homeless woman’s full humanity, and effects in the reader a “healing [that] has its own pace” (“Tall Grasses Rippling in Wind”). If that isn’t the poet’s task, I don’t know what is.

AUTHOR’S NOTE: I’ve known Fay Chiang since 1974 when she was executive director of Basement Workshop, a landmark Asian American arts center in New York’s Chinatown. At the time I was coordinator of Basement’s Writers Workshop.