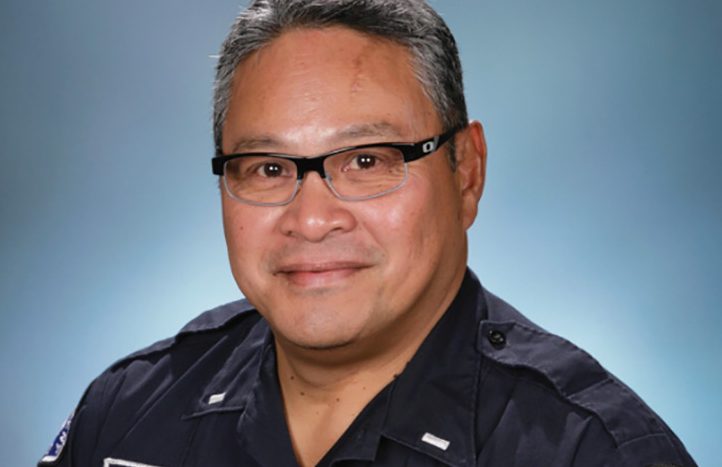 Lt. Louie Ignacio Batayola passed away peacefully on November 24, 2021, at 4:30 AM due to lung failure, a complication of treatment for work-related MDS, an aggressive blood cancer. Lt. Batayola was 63.

A 37-year veteran of the Seattle Fire Department, Louie found his calling one day while driving a Metro bus. He stopped at a Queen Anne traffic light to say hello to an old Roosevelt high school friend, Pete Aoki.  Aoki was standing at the tailboard of Engine 8 to stay dry from the hard rain. He recalled, “He asked me if I like my job. I told him I love it and encouraged him to apply.” The rest is history.

Lt. Batayola joined the Seattle Fire Department (SFD) in 1984, courageously serving most of his career in the two busiest fire stations in Seattle located in Belltown and Chinatown International District (ID). He was a Firefighter/Emergency Medical Technician and helped lead the City’s hazardous materials response team, becoming a state and national trainer.

He had a love for Chinatown ID elders that was palpable. Richard Mar, board president for International District Emergency Center (IDEC) shared memories about Lt. Batayola.

“I spoke with several of our members regarding Louie and his involvement with IDEC. My first meeting with Louie was at an IDEC Aid Station at the Bon Odori (Japanese summer festival).  This must have been in the 80’s when he first joined SFD. He arrived in uniform and said he was there to work a shift. Typical of Donnie (Chin, IDEC Director and Chinatown ID leader), he did not have him on the shift list, so it was a bit unexpected. We spent the time meeting other volunteers and learning about IDEC programs. I do not recall if we had to respond to any runs.”

“His being there in uniform really gave IDEC ‘credibility’ to the festival attendees. Many of the young kids had a chance to interact with a real fireman. Over the years, he continued to volunteer at our aid stations especially when we were at the Obon when his schedule allowed it. He was with us even after he made Lieutenant.”

On July 23, 2016, Donnie Chin was tragically shot and killed while patrolling the neighborhood. Mar continued, “After Donnie was murdered, Louie was with us as a part of the Fire Department’s Chaplaincy Program. Louie was a big part of helping IDEC members, volunteers and board get through our grieving process. His support and sensitivity meant a lot and we are forever grateful. I learned from one of our senior members that his support continued for several years after the shooting. He and the SFD chaplain would schedule monthly lunches and check in periodically to see if our members needed someone to talk to. I was informed there were (other) members who were referred to the program for further services.”

Jamie Lee, SCIDPDA community initiatives director echoed the sentiment of how Batayola also helped her staff move through the trauma of losing Chin.

Lt. Batayola’s love of elders extended to his own parents Luis Sr. and Dolores Batayola. Saddened at finding elders alone at their homes during 911 EMT runs, he bought the house across the street from his parents’ home, where he and his wife Martine raised their two daughters. The decision was fortuitous. They were able to assist both parents age in place, and eventually through their respective illnesses. Enjoying Friday night drop-in dinners at his parent’s house was a weekly event that brought the entire family together.

Lt. Batayola’s sense of community took him back to his motherland, the Philippines. In 1991, after the volcanic eruption of Mt. Pinatubo, he went with the Seattle-King County Disaster Team to conduct search and rescue operations in remote areas. Instead, he found long lines of people who traveled from afar to access basic health care. It was his first time back home after immigrating to the U.S. as an 11-year-old in 1969. President Corazon Aquino gave the rescue team an audience, singling Batayola out, urging him to relearn Tagalog. Local newspapers delighted in featuring photos of the “American” Batayola and President Aquino – the native son who returned to help his country.

Seattle firefighter colleague Aaron Banks commented that Lt. Batayola impacted thousands of lives. He was a fierce advocate and protector of his teams, a mentor and coach to many, and through the years, he found time to volunteer with efforts to uplift firefighters, and search and rescue operations.

Longtime friend retired Captain Preston Bhang commented “…We see things that are tough, especially (things that happen to) children…Louie was asked to come (serve) downtown Belltown where there is so much action…he was asked to serve on the hazmat team…You don’t see firefighters (like him) serving into their 60’s.”

Lt. Batayola was looking forward to retiring, helping his ailing mother and mother-in-law, fishing, cooking, traveling, and volunteering at IDEC when he was diagnosed with MDS in July 2019. He was also clinically diagnosed with work related PTSD (post-traumatic stress disorder). Retired Captain Pete Aoki captured the sentiment of most family and friends: “I feel bad that the job actually is what made him sick.”

The white board at Lt. Batayola’s University Hospital ICU room noted: “I am proud of my wife, my daughters, and my career.” On tough stuff, he would inevitably say, “It is what it is.” He died peacefully with his wife Martine and daughters Isabelle and Amelia by his side.

He will be honored with a Seattle Firefighter Line Of Duty Death funeral service. To access the livestreaming, go to Eventbrite.com, type in Lt. Batayola Memorial and register by 5 PM,  January 18.