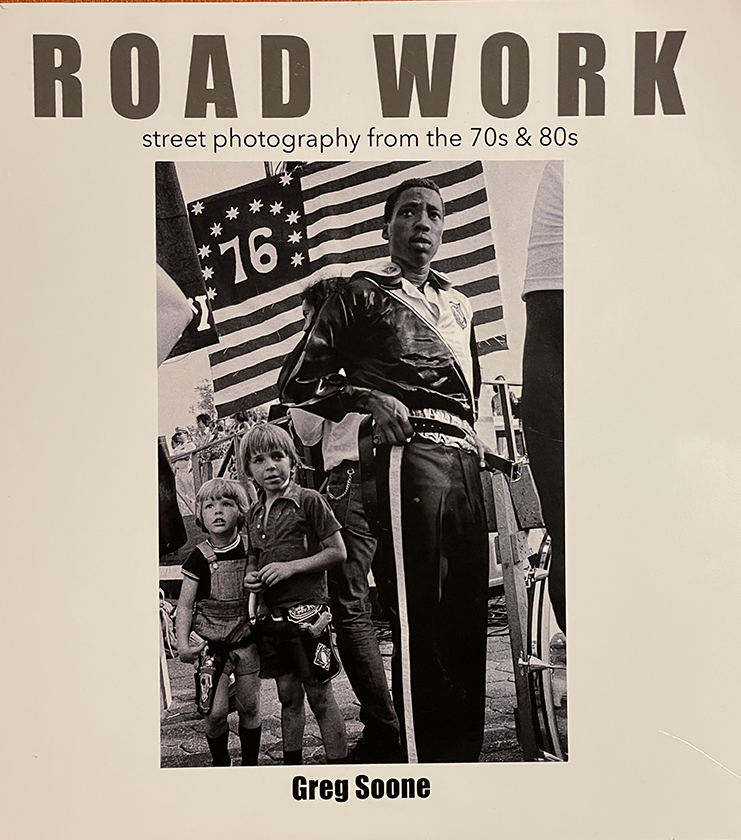 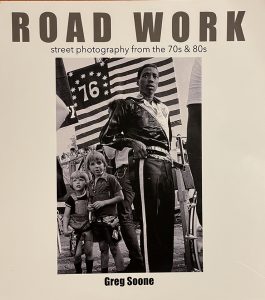 There’s a saying that everything old is new again. If we look back we can discover all that we forgot to learn from history and apply it in a new context to actually move forward again. A great lesson that seems to repeat itself over and over again throughout human history. So it is true within the world of the visual medium of documenting what we see in the world as an object that we can preserve and hold on to. Whether it be sketches, drawings, paintings, photographs, films or digital medium, we always can learn so much by revisiting that which came before.

Case in point in the recently released book Road Work; Street Photography from the 70’s and 80’s showcasing the work of photographer Greg Soone. The mere fact of having a book of photographs is in itself something beautifully retro and significant.

As a genre, street photography has existed from the very first day a latent image was exposed and reproduced on a sheet of paper. Greg’s book brings back a vision that many of us in the digital selfie infused world have forgotten or are just beginning to discover. We now live in a world where everyone who has a cell phone has a still camera and video camcorder. The endeavor to document our world, as always, continues in starts and stops and the responsibility of how we shape our voice and bring forth our vision falls on each one of us.

Greg’s work is reflective of a “golden age” of a socially conscious artistically created utilization of photography to create a discourse on the everyday world around us. Primarily self-taught, Greg’s exodus of self-discovery in photography was further inspired by the photographic work of social documentarian Bruce Davidson and “street photographers” Robert Frank, Helen Levitt and Andre Kertesz. It was an aesthetic and discipline he utilized and explored in travels crisscrossing the world. Themes of race, politics and class dominated his vision and were further cultivated with his work with the Kearny Street Workshop in San Francisco, an Asian American art collective.

I was able to catch up with Greg for the IE where he currently lives in Vancouver BC for some Q&A as he prepares for an upcoming presentation at the end of this month.

International Examiner: What was it about photography that first grabbed you?

Greg Soone: I liked how it seemed to preserve memories. In some ways though, our memory of an event has been eclipsed by our memory of a photograph of the event.

IE: Could you expound about what it was that drew you to that medium in the first place?

GS: It was the immediacy of the medium, even accounting for the time it took to develop a roll of film and print a photograph, which could be days or weeks. Need I say this was before the advent of the Internet or smartphones.

IE: How were photographs woven into your early life and your family?

GS: Photographs are a natural touchstone. I mean the first thing people grab when forced to abandon their home is their photo albums. My mom had many photo albums going back to the 40s, mostly of family and friends.

IE: How did the photographs you saw initially shape your vision?

GS: The first photographs I noticed were landscapes because I liked backpacking and being in nature. Ultimately that did not shape my vision as I became more politically and socially aware.

IE: Did you ever take any photo courses in high school or college?

GS: I did take one photography class one summer in New York, but I am largely self-taught.

My first camera was a Brownie type camera which I used to take snapshots of my friend and me. There was no experimentation at this early age.

IE: What did your family think about you and photography?

GS: Well, once I started getting into it, I always had a camera around my neck. I think my family thought it was an affectation, but they never said anything. My mom was trying to figure out how I could make money off of my hobby.

IE: Do you remember what the first photographs you snapped were of and how long was it before you were able to do the process all yourself from film processing to printing?

GS: A family friend gave me a darkroom kit when I was in junior high, and that’s what really got me started. I had a darkroom under the stairs in the basement next to the furnace. The photos were contact prints because I didn’t have an enlarger.

IE: How were you self-discovering through photography?

GS: It took me a while to find my voice. Initially I took a lot of self-portraits and random shots of my apartment. A relative from New York introduced me to Leicas and ways of developing Tri-X film. I learned a lot just by looking at his photographs.

I attended the University of California at Berkeley for my freshman year. I transferred to the University of British Columbia (UBC) where I fell in with a group of Asian Canadian students led by a charismatic Japanese American professor. He exposed us to the Asian American movement, the treatment of African Americans, community development, and documentary photography.

IE: How did you come across the work of Bruce Davidson and the 1950s-1960s street photographers?

GS: The UBC group had a library of photography books by Bruce Davidson and other civil rights photographers.

IE: What did you see in them that you saw in yourself?

GS: Particularly with Bruce Davidson, I saw the social consciousness that formed the basis of his work. I felt the empathy which was a primary motivation for me.

There will be a book launch, slideshow and artist talk by photographer Greg Soone on behalf of Road Work; Photography from the 70s and 80s set for Sunday, May 29, 2022 at 2:00 PM as Part of the Powell Street Festival at The Cinematheque at 1131 Howe St. in Vancouver, BC. There will also be a live stream of the slideshow/talk on May 29. Details will be posted at a later date on the Powell Street website:  https://powellstreetfestival.com/greg-soone-road-work/. To purchase books, go to https://roadworkphotos.wordpress.com/