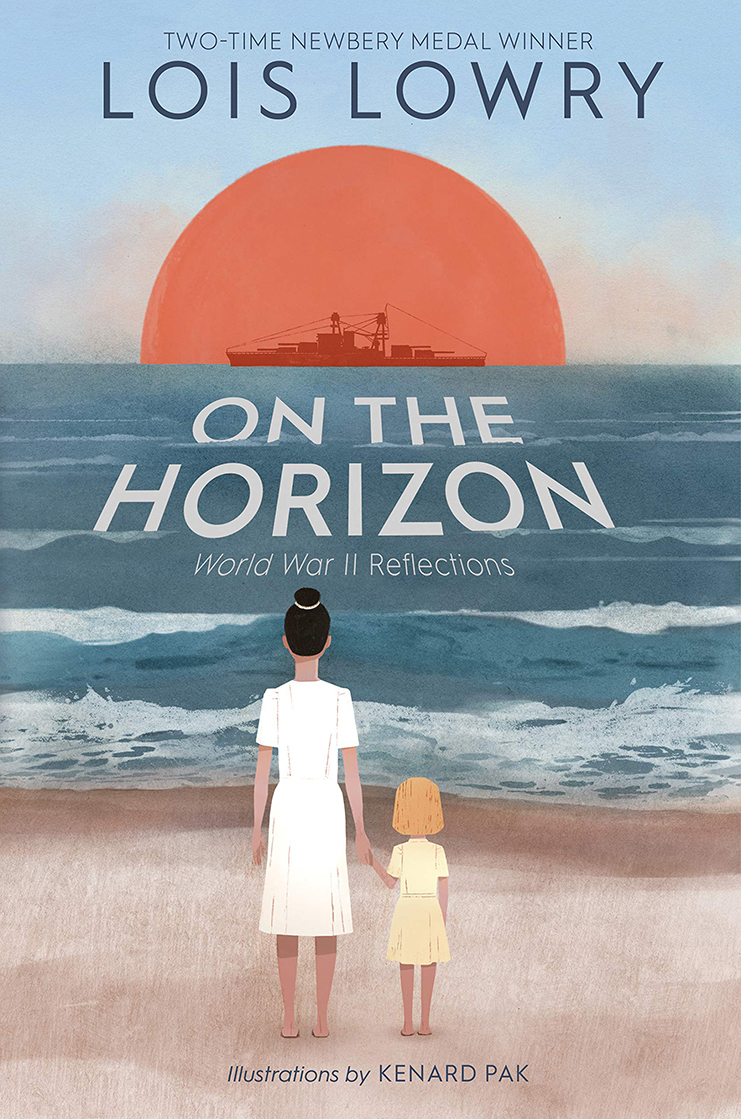 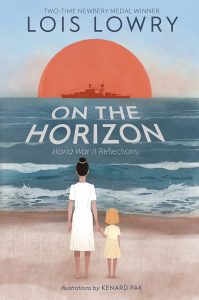 In On the Horizon, two-time Newbery medal winner Lois Lowry presents a collection of poems reflecting on her experience growing up in Honolulu and Tokyo during and after WWII. The poems are accompanied by black and white illustrations by Kenard Pak that bring to life the individuals and scenes depicted in the poems. While both reflecting on Lowry’s memories and drawing on stories of fallen soldiers and their families, the poems create webs of connections that weave the collection together.

The opening of On the Horizon describes the bombing of the USS Arizona through portrait poems of soldiers on the ships. Subtle rhyming schemes and thought-provoking imagery paired with illustrations create surprising rhythm and beauty while describing such a destructive event.

I was particularly struck by the poems about the Navy Unit Band 22 who were playing on the deck of the Arizona when the alarms sounded. The poem The Musicians ends, “Back home each one had friends they missed, / dogs they’d raised, and girls they’d kissed; / childhood rooms with model planes, / boyhood bikes with rusted chains; moms and dads and baseball teams, / and dreams – each one of them had dreams.” The rhyming in this poem, and throughout all the poems, is done eloquently in a way that moves the poem forward without taking over. I also found the point that they all had dreams to be very powerful, because no matter how different we all are, everyone has something they want and dream of.

On the Horizon forces the reader to think about the ways we are all connected. In the second section, Lowry draws parallels between the soldiers on the Arizona and the civilians affected by the atomic bomb dropped on Hiroshima. Again using portrait poems, Lowry describes many individuals, including children, that experienced the devastation of Hiroshima. She uses images like a little boy’s red tricycle that stick in your mind and continue to appear throughout several poems like a thread sewing the different sections together.

The poems 8:15, December 1941 and 8:15, August 1945 present the most obvious parallel between Pearl Harbor and Hiroshima. Both poems revolve around a watch worn by an individual during the attack that was stopped at 8:15am. Two devastating attacks that began and ended a war, symbolized on the wrists of those in the midst of the event. Two attacks that made time stop; the coincidence alone is poetry. After reading 8:15, August 1945 which ends “But he found, in the ruins, / his father’s watch. 8:15, it said,” I actually closed the book to take a breath and process the connection to the previous poem.

In the third section of the collection, Lowry focuses more on her own experience living in Tokyo as a young American girl. She feels like an outsider, observing Japan recovering from Hiroshima through a child’s eyes. She has a green bicycle, paying homage to the red tricycle in the previous section. The bicycle allows her to explore Tokyo on her own, coming across a school where she watches Japanese children play, particularly a boy about her age. They are separated by a fence, like they were once separated by an ocean. The book ends with a poem that repeats “we could not be friends. Not then. Not yet. / Until the cloud dispersed and cleared.” The word “cloud” stands out to me in this line because Lowry chooses to say “cloud” and not “clouds”. Both she and the Japanese boy have to work through the same trauma, the same cloud. This emphasizes the connection between her and the Japanese kids on the other side of the fence and alludes to the larger connection among all of us.

On the Horizon presents a thought-provoking perspective on the divide and connection between Americans and the Japanese during these tragic events. However, I think it left out another perspective to explore: Japanese Americans. They were strongly connected to both countries and yet rejected by America and asked to forfeit any loyalty to Japan. Japanese American boys and men, originally prohibited from joining the army, formed the 442nd, the most decorated military regiment in U.S. history. They represent this connection Lowry is trying to prove, that you can be betrayed and hurt but continue to love.