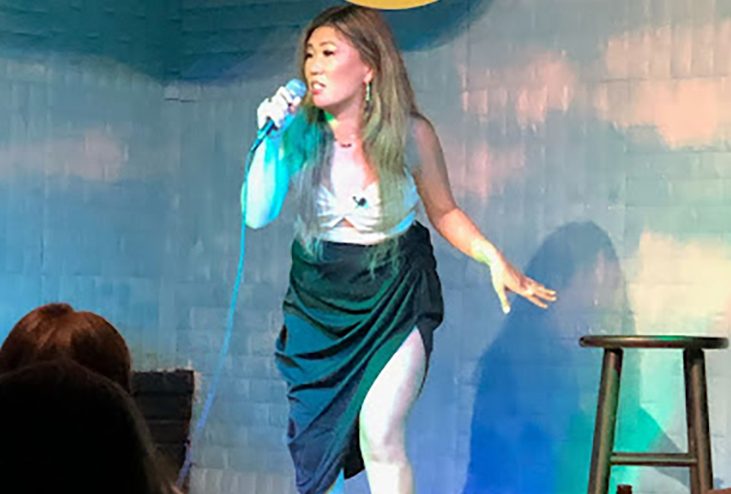 Comedy wasn’t something that Ellen Acuario ever saw herself pursuing in her life.

“If someone from now, went to child me and said ‘Ellen, you’re gonna be this person that gets on stage and relishes it and makes people laugh,’ that would have blown my f*cking mind,” Acuario said.

Ellen Go Acuario is a Korean American comedian storyteller and performer from the Pacific Northwest. She has been in the comedy world for over eight years and has done shows throughout Washington in places like the Comedy Nest, Laughs Comedy Club and Parlor Comedy Club.

Acuario was the type of child to get sick to their stomach before a class presentation. She shared that growing up as a child, her parents ostracized her for being a loud person. Like some Asian American children, she was trying to be everything her parents wanted her to be.

She studied at the University of Washington, graduating with a degree in fine arts photography and art history. Acuario worked at portrait studios before she opened her own photography studio.

“I was really zealous and focused on making a certain amount of money. I did all that, and then I got burned out,” Acuario said. “I did everything I set out to do with that business and then I got tired. I didn’t want to hold a camera anymore.”

It wasn’t until her husband told her she didn’t have to stay in photography just because she fixed this path for herself that she considered doing something different.

“You don’t have to do the thing that you set out to do and that be it,” Acuario said. “We have this life and things change.”

On a whim, she auditioned for a radio show host for MOViN 92.5’s Brooke & Jubal in 2014 since one of the hosts was going on maternity leave.

Acuario made it to the final round, but lost since listeners tore her apart with hateful comments about her voice. She said she cried reading some of the comments, realizing people really hated her. On the second day after her rejection, she was mad. And on the third day, she decided to go on stage.

“Obviously, I’m a personality that needs to be felt as a whole. That’s what I came up with from that rejection,” Acuario said. “I was like, I’m gonna sign up for an open mic somewhere. Which is crazy because how do you go from being hating on and being depressed about it and then the solution is naturally to get on stage. And that’s how I started my comedy.”

Acuario said that her comedy is inspired by her daily life and her identity as an Asian American woman and a mother.

“The layers of my identity in intersectionality I think is an endless well of material,” Acuario said.

She shared that her identity might be a reason for her following since people are craving BIPOC representation in spaces they were previously banned or ostracized from.

Acuario shared that comedy allows her to process her childhood trauma. Acuario is inspired to share with people her trauma to let them know they are not on their own.

“You can get to a place of healing and own your life traumas. What may have broken you before, you can turn into laughter,” Acuario said.

Before stepping into the comedy scene, Acuario came to the U.S. from Korea when she was eight years old. She grew up struggling with her identity and being raised by immigrant parents. Acuario is estranged from her parents and hasn’t spoken to them in over five years. She acknowledged that there is a big theme of a struggling relationship with parents in the Asian American community.

“We’re kind of torn about how we continue as Asian Americans, but also, how to value our filial roots and what our cultures hold so dear,” Acuraio said. “I think for my Asian American community, I just would like to emphasize or share that. You know, there is no right way to deal with your family experiences. There’s only the way that you choose, because only you know your story.”

She acknowledged that in Asian culture the value of family is important, but Acuario said she doesn’t want her own children to be consumed by it, to understand that putting themselves first is not a betrayal.

Acuario has a TikTok following of over 420,000 followers under the username @YourFunnyUnni; Unni is the Korean word for older sister or cousin. She said that she initially made an account at the beginning of the pandemic to make videos of her children but it morphed into creating content against anti-Asian sentiment on social media.

“I get a lot of young people DMing me that they feel heard through what I say,” Acuario said.

While Acuario has pursued comedy for eight years now, she said she wanted to quit many times since she had difficult times.

“I’m finally at a stage where I actually can feel free onstage, and that is a huge accomplishment for myself, and that is success,” Acuario said.

Acuario was featured on the Cut series “LineUp” on YouTube, performed alongside “Crazy Woke Asians” in Seattle, has been a featured guest on the RISK Podcast and a co-host contestant on the 106.1 KISS FM morning show with Carla Marie & Anthony.

She has an upcoming show called Blast off Seattle Freeze with Ellen Go Acuario on June 16 at the Laughs Comedy Club from 8:00 to 9:30 PM.

“I think we have to really define for ourselves what happiness really looks like. I think so many people are fixated on monetary gains especially in our culture, I think this is proof that you’re doing well in life,” she said of her onstage career.