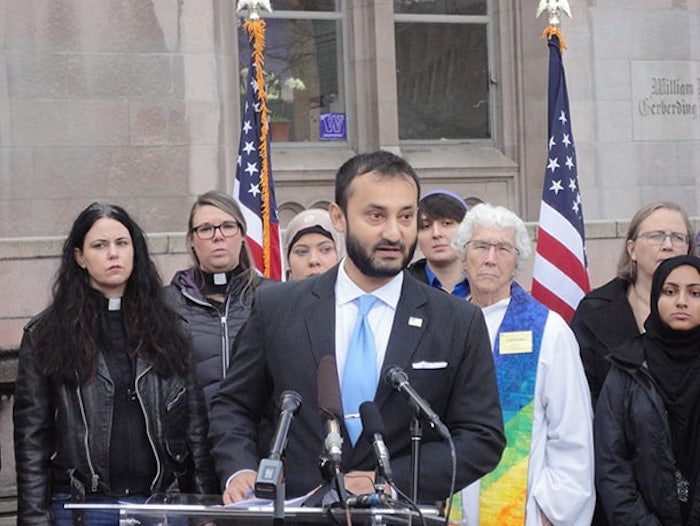 The Council on American-Islamic Relations (CAIR) works to establish a positive image of Islam and American Muslims. The organization aims to empower the American Muslim community and encourage its participation in political and social activism.

Bukhari started volunteering with CAIR in 2006. Almost 12 years later, Bukhari will now find himself working with national media editors to do a better job covering American Muslims accurately and appropriately.

In a statement on CAIR’s website, Bukhari said the news job would be an opportunity “to take lessons-learned from research, case studies of success and pilot projects, and scale these at the national level.”

In a recent interview, looking back on his days as director of CAIR-WA, Bukhari’s said two common issues reported by Muslims in Washington were employment and federal agency-related incidents. This could mean hate incidents, race or ethnicity-based harassment and more.

Bukhari explained: “It could be denial of religious accommodations, for instance requesting days off for religious holidays, or the ability to wear head scarves based on religious freedoms or receiving break time for daily prayers and things like that.”

Another common type of case in Washington is when federal agencies like the FBI increasingly harass innocent American Muslims while at home, traveling to or from the country outside of airports, or even while they are at work, Bukhari said. Another federal agency that tends to come up in local cases is the TSA. There were many stories from Washington of American Muslims being held for up to several hours with little or no justification.

To combat these local issues, one of Bukhari’s proudest moments with CAIR-WA was taking part in Washington State Muslim Lobby Day, an annual day of education and organization put on by CAIR-WA. The event was held once a year on Martin Luther King Day from 2010 through 2015.

“We had about 500 people or more on average attending from 35 or more districts out of the 49 districts that are in our state legislative system. They go there in the morning they have breakfast here at the center and they’ll have training and role play practice in small groups on how to speak effectively to media,” said Bukhari.

The full day’s activities were finished off by a short march to the capitol building, followed by a rally at the capitol steps where participants could get one last show of inspiration.

On the national level, Bukhari sees the impact of inflammatory and false views against Muslim Americans found in news, commentary and entertainment media to be the biggest issues facing CAIR as an organization, and American Muslims as a whole.

“It’s becoming more and more clear we need to change the portrayal of Muslim Americans to the public,” Bukhari said. “When we [look at] research about American Muslims, the portrayals being seen in media in the last 10, 15 years is not only inflammatory but false.”

President Trump’s rhetoric, including the ban on immigrants and travelers from predominantly Muslim countries, has also played a role in American Muslim issues across the country. Bukhari thinks Trump tapped into people’s fears and concerns about the future and what they see happening to them and around the world. The rhetoric on Muslims on 24/7 cable news, the internet, social media and talk shows contributes to the problem, Bukhari said.

Speaking on the proposed Muslim ban, Bukhari points out that it found bipartisan support with about half of all likely voters supporting the it. “Over 35 percent of likely Democratic voters supported it, and support means more than just agreeance,” Bukhari said.

Contrary to what many Americans believe as a result of movies, music and video games, negative stereotypes that Muslims hate the U.S. or don’t believe in American values are not backed up research, Bukhari said.

He points to a 2011 Harvard University study, the largest study of American Muslims at the time, which shows that the more involved a Muslim person is in mosque-related activities, the more likely they are to believe that Islam is compatible with political participation in the U.S.

The study also showed that greater religiosity among Muslims in the U.S. was correlated with a higher likelihood of political participation.

“What this tells us is that [Trump] simply tapped into sincere concerns people have, and our job is to help people understand the lives of our American Muslim neighbors and the contributions and hopes and dreams of American Muslims,” Bukhari said.

Bukhari hopes his new role in D.C. will allow him to help CAIR put to rest many of the disparaging stereotypes found throughout the national zeitgeist, while continuing to create stories about what average American Muslims are doing every day.

His goal? “I want to help American Muslims and their families be accepted and understood by their friends, coworkers and fellow citizens.”