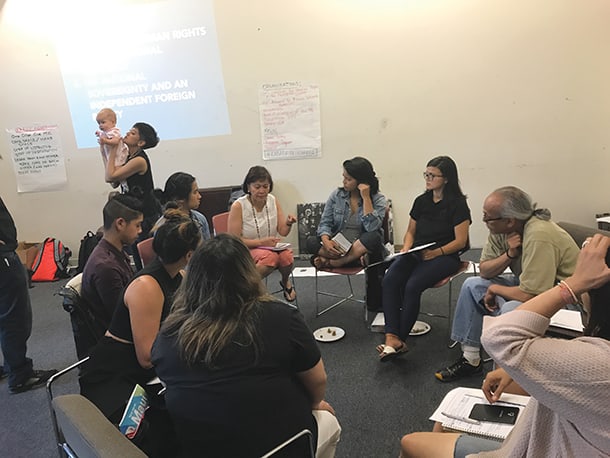 Filipino Americans of the Greater Seattle area raised concerns regarding a conflict in the Philippines with multiple forums across the region. On May 23, 2017 Filipino President Duterte declared martial law in Marawi City, Mindanao. The southern island city was besieged by ISIS affiliated militants. Since then, an estimated 294,000 Filipino people have been displaced (ACAPS). The ongoing fight for the city creates anxiety for local Philippine nationals and American relatives. The civil unrest creates the added factor of humanitarian crisis, as well as military escalation. The latest Duterte declaration itself reflects the past corrupt and bloody martial law period under the dictatorship of the former Marcos regime.

A new collective has formed in response to Duterte’s administration. The group, Kababayan4Change, held a public forum along with an assessment of Duterte’s first year in office. The range of people who gathered in the Central District showed the broad swath of diversity inside of the Filipino American community. Mothers with infants, college students, local activists, folk singers, and young professionals made up the interested attendees. Some came as far as Port Orchard with the intent to relay the feelings and ideas heard to other Filipinos in the Kitsap peninsula area.

Seattle organizer Donna Denina felt the need to shine attention on Duterte so that local Filipinos could be better informed on how to take action and stay updated. She also realizes that global conflict can shape sides here in Seattle. Denina explains: “Kababayan4Change is more of a platform to have discussions on issues impacting the Philippines as concerned Filipinos overseas. There are many pro-Duterte supporters, there are anti-Duterte supporters—regardless, both sides can unite on wanting to see change for the Philippines. Similarly whether you are for Martial Law in the current political situation or against it, we can still strive to unite to figure out the best solution to the conflict.”

Information shared and presentations revealed military and capital interests for the Mindanao region, and individual speakers recounted the fear they felt during the Marcos era while living in Manila. Although some Filipinos feel martial law has necessity to suppress ISIS control, the inherent warning by Kababayan’s speakers is that military government control can be a greater danger.
Kababayan4Changes’s event asked participants to grade the Duterte presidency based on the information and accounts given. According to Denina, “The Overall grade was an ‘F’ minus, based primarily on the impact to peace and upholding human rights.”

Besides the recent military engagement in Marawi, Duterte has become notorious for his tough stance on drug users. His rhetoric is believed to have caused a rise in vigilante justice in the Philippines drug war. The non-profit Human Rights Watch estimates extrajudicial deaths at over 7,000 people. Duterte’s continued aggression in policy making shows no relent. Duterte has exclaimed to the press that, “Martial law is martial law. It will not be any different from what President Marcos did. I’d be harsh.”