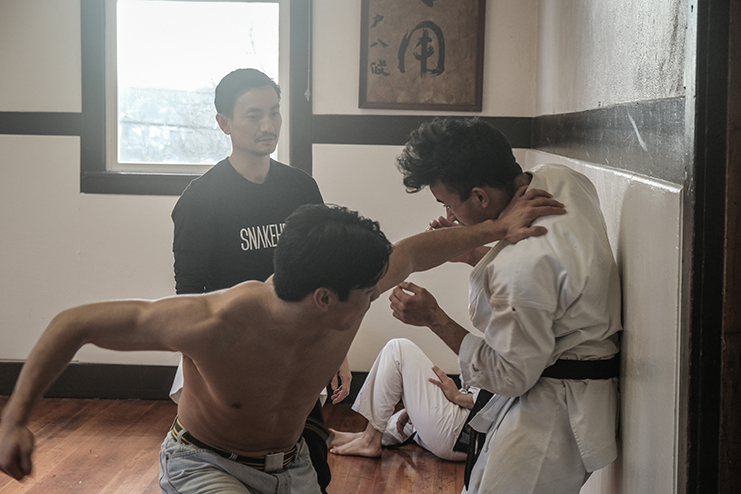 Director Bao Tran knows how to get things done.

As a student at Seattle University, Tran hunkered down and juggled his independent film projects and the courses needed to finish his computer science major as a full-time student. Passing up film school because of its expenses, he settled on a major that satisfied his parents should his aspirations to become a filmmaker fell flat on his face.

“I knew I wasn’t going to use the degree, so I had to figure out how to do something I really didn’t like to tough it out,” he said. “In general, it was just work ethic and discipline. There was no balance to making films and doing schoolwork; I just had to do it. I loved making movies so much that I was willing to put up with doing both for four years.”

That period of his life was so stressful that he continues to have nightmares 15 years after he graduated about whether he finished his coursework and whether he got all the credits he needed to graduate. For Tran, there was no way he was going to extend his misery for another year or spend an extra dime on something he didn’t care for.

It is this work ethic and discipline that he imbues on his current project The Paper Tigers. Written and directed by Tran, the movie is about three childhood friends who come together to avenge their martial arts master. Unlike most martial arts films, however, the heroes of this story are past their prime with their glory days behind them, saddled with duties and responsibilities expected of fathers and husbands.

“Imagine you had a fight or death match but had to pick up your kids from soccer. That’s what I wanted to explore with the movie,” said Tran. “I always think the drama comes from people who are not always at the top of their game, people who have to struggle or make up for a lot of lost time, so you’ll see a lot of action and fight scenes that are going to be sloppy; they’re going to stumble and trip over their left feet.”

The Paper Tigers had been a work-in-progress for Tran since 2012 who had been moving back and forth from Vietnam for three years, working as a film editor on major film projects there. The Paper Tigers was in part inspired by his own life as he looked at the lives of friends he made films with when he was younger who ended up going their own separate ways.

“It just felt bittersweet because I thought we would be making movies together forever,” he said. “It’s also something I can relate to as a filmmaker because I sometimes ask myself, ‘Do you feel like you’re doing what you set out to do and is that what you even want now?’”

A North Seattle native, Tran was first introduced to the world of martial arts and film by watching Bruce Lee on television. He enjoyed watching those movies, but when his parents suggested he start learning martial arts to get him off the couch, he stubbornly refused. “I was literally kicking and screaming to not learn how to kick and scream,” he said.

Already being forced to learn the violin, Tran did not want to introduce yet another unwanted element into his life at his parents’ behest. “I have to begrudgingly admit that this one stuck, though,” he said. “Look at me now. It’s their mistake. The most foolish mistake they’ve ever made in their lives. I can blame it all on them. And I do.”

Beginning with taekwondo, Tran fell in love with the sport and gradually added other disciplines as he became interested in them. It wasn’t until he was 11, when he started watching Jackie Chan movies, that he became interested in being a filmmaker. Noticing that the stunts and action sequences were at a level beyond what he was seeing in American films with action stars like Jean-Claude Van Damme or Steven Segal, he was instantly hooked and wanted to figure out how everything was done.

“It was an eye-opener to know that there were all these movies with Asian superstars that were doing this,” he said. “It totally opened the door in terms of understanding movies as movies and actually figuring out how they did it.”

Tran was fortunate enough to get professional guidance from Corey Yuen, who has worked as an action director, fight choreographer and director for films such as Lethal Weapon 4, X-Men, Romeo Must Die and The Transporter. Yuen is a family friend, and Tran went to high school with his children.

“It’s incredible that he would watch my stupid backyard videos and gave me advice and tips, and that was film school in and of itself,” he said. “He also put me on the perspective of making movies for the world: You have to think about the audience because the audience is king.”

The Paper Tigers has four producers, two of them being Yuji Okumoto, Seattle restaurateur of Kona Kitchen with over 35 years of experience as an actor, producer and writer, and Al’n Duoung, an Olympia native who studied film in the University of Washington.

Tran has found a large base of supporters, but the support needs to translate into money as he strives to finish the last leg of the movie, which he hopes to start filming during the summer. He started a crowdfunding campaign in 2017, which, when added with some money that was saved up, was enough to start filming the flashback portions of the characters’ lives. Around the end of 2018, he started a Kickstarter campaign that raised $120,000 in 35 days. Now Tran is making the rounds at corporate speaking events geared towards Asian employee groups at Microsoft, Google and Expedia. Seeing how he needs to raise about $1 million, Tran is hustling to make sure his film will see the light of day by 2020.

“We take funds in many different ways,” he said. “We don’t say ‘no’ to any dollars. We find ways for you to benefit and for all of us to benefit as well. For the most part, we need this money to make sure the staff and crew are compensated for their time in a fair way.”

“This movie is not just about putting more [POC] faces on-screen,” he continued. “It’s about creating an audience or culture that is willing to come out and watch these types of movies. There are some perceptions of what a kung fu movie is, but that’s not the type of movie we’re making. Our characters don’t speak with accents. They all speak English. For us, them doing martial arts and kung fu is just like kids doing baseball or soccer. That’s the world we want to paint for the show: something that we can relate to and is grounded in the real world.”

Learn more about the movie and make a contribution here.