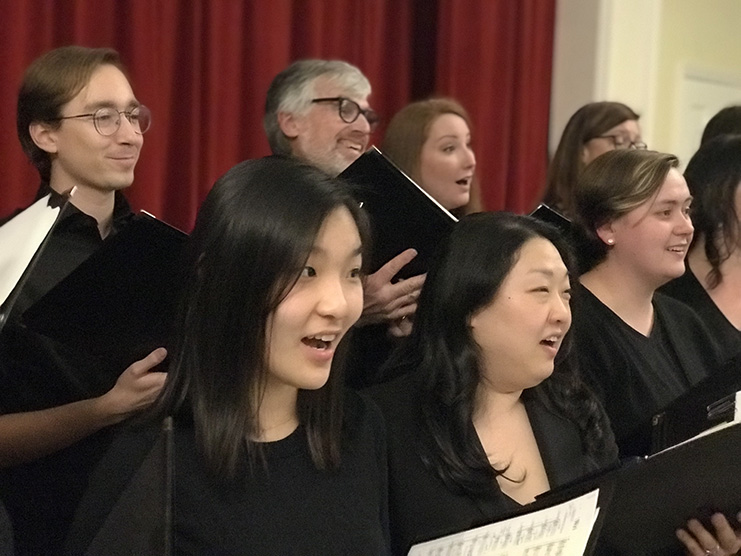 Seattle Pro Musica is a local choir focused on spreading the appreciation of choral music, and this month, they will revisit their past while presenting works that will most likely be new to many of their audience members.

On March 9 and 10, Seattle Pro Musica presents Pacific Voices, which will include choral music from a range of Asian and Asian American composers. “A couple years ago, a group of singers were hanging out after rehearsal and someone mentioned that Seattle Pro Musica had done a concert 10 years ago of all Asian and Asian American composers,” said SPM board member Hannah Won. “During that conversation, I casually tossed out the idea that Karen Thomas, our Artistic Director, should re-mount the program.”

Won, who also sings with SPM as an alto, then developed the concept further. “The more I thought about it, the more I was convinced that we needed to do this program again – and soon,” she said. “As an American choral singer, we rarely have the opportunity to explore music that is not based in Western choral traditions, so I was very eager to explore music from people who represented me and my heritage.”

Next, Won began a collaborative process with artistic director Karen Thomas, whose role is to select the music for each SPM concert. “I specifically sought out the advice and guidance of Asian-American members of Seattle Pro Musica to ask whether they had any suggestions of pieces that I could consider,” Thomas said. “Some of the music for Pacific Voices came from those suggestions, and I was delighted to discover some new music based on our members’ recommendations.”

This approach served SPM well, Won believes. “I noticed that the choir had gained several Asian American members who were very engaged and serving in leadership positions within the organization,” Won said, “so I felt that we would be able to approach the material in a meaningful and respectful way.”

Wes Kim, Seattle Pro Musica’s Board President, views the Pacific Voices concert lineup to suit SPM’s mission well. “SPM exists to share the art of choral singing with the community in the hopes of sparking in audiences the unique joy and inspiration that this music can create,” Kim said. “This gives our artistic director a terrific opportunity to program more expansively while still fulfilling our mission.”

Although the concert will present works representing China, Japan, Korea, India, Indonesia, Thailand, Mongolia, Philippines, and the United States, Thomas shared a sneak peak of a couple of her choices of the pieces. “A couple of my absolute favorites are Alleluia by Hyo-Won Woo, and Zikr by A.R. Rahman,” she said. “Alleluia is fast, exciting, and musically challenging, plus it has a gorgeous tenor solo. Hyo-Won Woo was for many years the composer-in-residence for the top professional choir in Korea, and her music is very well-crafted.”

Thomas likewise raved about A.R. Rahman. “Rahman is well-known as a Grammy award-winning composer of film scores, such as Slumdog Millionaire, and is hugely popular around the world,” Thomas said. “Zikr is based on the music of whirling dervishes. It begins quietly and slowly, and gradually builds to a fast and ecstatic end. It’s incredibly fun and thrilling to perform!”

Members of the choir also expressed enthusiasm for the variety of pieces to be included. “It’s exciting to sing Balinese dance music, Korean folk music, and settings of Chinese poetry, all in a single concert,” said soprano singer Joy Portella. “It’s also fascinating to hear how elements of the Western choral music tradition weave into some of the pieces we’ll perform.”

Fellow soprano Meaghan Leferink agrees. “I think that it’s easy for audiences and singers unfamiliar with the wider world of Asian and Asian American composers to essentialize concerts like this one and think that it’s going to sound one particular way,” Leferink said. “We have pieces based on folk melodies, text settings of modern poetry, songs sung in Latin inspired by medieval polyphony- we’ve really got it all!”

Heidi Kim, soprano singer in SPM, agrees that language has been the top learning opportunity. “I am familiar with some of the traditional melodies, yet the choral settings bring them to life in beautifully complex ways,” she said. “I’ve never sung in Mongolian before, and I’ve been singing for over 50 years!”

Portella concurs. “If you’re used to learning and singing Romance and Germanic languages, and suddenly your brain is trying to wrap itself around Japanese, Urdu, and Thai, that’s tough,” she said.

Thomas and the choir are approaching this challenge directly. “We are fortunate to have members of Seattle Pro Musica who speak Korean, Japanese, Mandarin and Tagalog, and can coach us in rehearsal,” she said. “For the remaining languages we’ve sought out native speakers who can come to rehearsal to coach us, or who have made recordings of the language for us.”

Choir member Leferink appreciates Thomas’s approach. “Our conductor, Karen, doesn’t have to be the expert on every single aspect of this concert, though she is certainly an expert on most of it,” Leferink said. “It shifts the process slightly away from a traditional all-knowing director and their compliant choir to a more community-focused learning experience.”

Won finds this approach to be a great social as well as musical prospect. “I was very happy to discover that we were able to find diction coaches for Korean, Japanese, Mandarin, Urdu, and Tagalog from members of our choir,” Won said. “So in addition to learning more about what’s out there in terms of music composed by Asian and Asian Americans from traditional and Western styles, I also got to connect more and learn about the people I sing with.”

But Won finds singing with SPM to be more than just educational. “I joined SPM when I was going through a tough time in my life and it helped me feel like a whole person again,” she said. “Being able to work with so many talented, thoughtful and fun people to make transcendent music has been an incredibly healing and fulfilling experience.”
More broadly, board president Kim feels Pacific Voices will allow SPM and its audiences to broaden their musical palates. “My hunch is that many people’s idea of a classical concert would not bring to mind a program focused entirely on Asian and Asian American composers,” Kim said. “It’s exciting to me both as board president and as a longtime classical musician to give audiences the opportunity to rethink what a classical concert can be.”