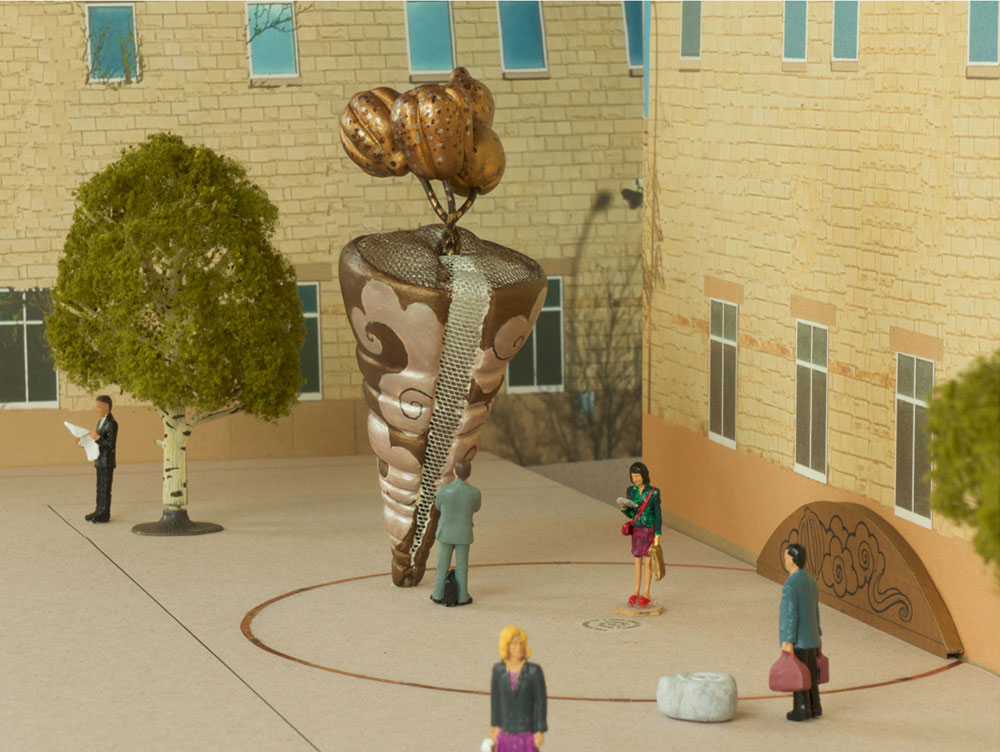 He was an immigrant from a reviled race, denied citizenship and the rights it entailed, and from his perspective, American justice must have looked more than a little off-kilter.

Yee Shun was his name, we’re told, and not long after his arrival in these United States he found himself in a notorious Old West town, on the wrong side of murder trial. His story sounds like the set-up to that Great Chinese American Western folks have been threatening to write since the 1970s: he got off a train, walked into a laundry, shots rang out and everybody ran. Little did he know that Territory of New Mexico v. Yee Shun (1884) would eventually be cited as a landmark in the fight for Asian American civil rights. Now, through the efforts of an Albuquerque optometrist, Dr. Siu Wong, a major public artwork has been commissioned to commemorate his case, designed by Seattle-area artists Cheryll Leo-Gwin and Stewart Wong.

Twenty-eight feet high, with a $275,000 budget, Leo-Gwin and Wong’s “View from Gold Mountain” will be permanently installed outside the Second Judicial District Courthouse in downtown Albuquerque. The design’s dominant feature, a conical shape tilting to one side, is a giant-sized “plumb bob”—the weight you dangle from a string to establish a true-vertical “plumb line.” Playing on familiar legal metaphors of balance, Leo-Gwin explained to me, the plumb bob represents the kind of movement that finds its way to justice.

From a cloud-shaped stone seat below the cone, viewers will be able to gaze up its “backbone,” where a three-stranded braid leads upward and outward, supporting a trio of gourds. For Leo-Gwin, the braid is a literal and figurative reference to diversity—to culturally significant ways of styling hair associated with early Chinese immigrants and other ethnic groups, as well as to the intertwining of their cultural practices and values. The gourds, standing in for the three branches of government, represent an elusive dream of justice imagined by Yee Shun and his countrymen, who called the US “Gold Mountain.” Meanwhile, a timeline of key dates in civil rights history will be inscribed in a circle on the ground, which continues up the wall as an arch sheltering more cloud shapes.

The project is the first collaboration between the two artists, who’ve been friends for many years. Stewart Wong was born in Hawai‘i, while Leo-Gwin was born in Canada. The fourth-generation daughter of a Chinese American father and Chinese Canadian mother, she says her parents couldn’t legally live together in either country, until Sen. Warren Magnuson helped her father bring them to the US.

Although she grew up on Beacon Hill, Leo-Gwin’s neighbors were mostly white, and she felt isolated from the few Chinese Americans she knew at the time. Her name confused people, so she told them she was Italian. In fact, it wasn’t until she was much older that she learned about the Chinese Exclusion Acts and began to study her history, inspired by a 1999 trip to China with an international group of artists. Unlike Wong, who was shocked by the racism he found when he came to Seattle for college, Leo-Gwin was startled to discover a place where she didn’t face discrimination. “These people are so free,” she thought. “What a strange place to find freedom.”

Since then, she’s taken Asian American studies courses, researched her history, and allowed it to transform her art practice. One series of her works is inspired by oral histories of women who lived through cultural revolutions in both China and the U.S., while another grows out of meditations on how Chinese exclusion laws were experiended—“separation, abandonment, love, loss.” Her son, the poet W. Todd Kaneko, followed a similar path, interviewing his Japanese American grandmother before she died and reflecting on camp in his own writing.

For Leo-Gwin, the Chinese government’s support for public art is an inspiration, along with works in the Pacific Northwest—Dan Corson’s Space Forms at the Beacon Hill train station, or Norie Sato’s work for King County Metro. The art at SeaTac Airport, she said, “just feels like a part of you—you might not even notice it, but it sends a message that this is a nice place, a peaceful place.” She wants her art to feel approachable to everyone, yet allow those who stop and contemplate to get more out of it. “Like walking past a person,” she said, “but if you stop and talk with them, you’ll get to know them. It’s the same thing.”

Another example of public art, she says, is the Statue of Liberty. “People don’t think of it like that,” she said, but it’s “pretty profound to me.” Relevant, too, in these trying times. The artists’ initial proposals, selected from 65 submissions to an open call, connected the aspirations of 19th century Chinese immigrants to today’s dreamers.

Then, as now, justice is a long walk, far from finished. The law wasn’t kind to Yee Shun, and while his case helped establish the right of Chinese immigrants to testify in U.S. courts, ironically, it did so at his expense. If the records of the case are to be believed, the court’s interest in finding the truth was, shall we say, casual. The judges and lawyers were all white, the jury Mexican-American, and the witnesses a crew of dissemblers and scoundrels better suited for a parody of legal debates over credibility.

The verdict turned on questionable testimony of someone name—no joke!—“Jo Chinaman.” His identification of Yee Shun as the killer was appealed by the latter’s lawyer, on the grounds that a witness’s oath meant nothing to the heathen Chinese. When the New Mexico Supreme Court ruled otherwise, it was good news for every Asian American except Yee Shun. Facing life imprisonment in Leavenworth, he hung himself in his cell.

Justice didn’t come in time for Yee Shun. All these years later, as another wave of immigrants is learning, it still hasn’t arrived. But it’s coming.