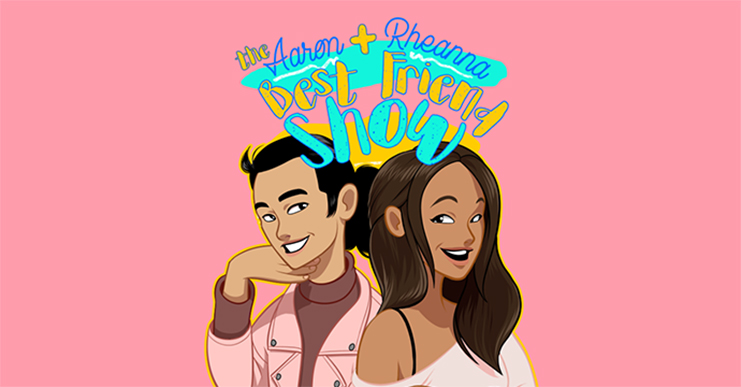 The COVID-19 pandemic has brought people together in unexpected ways, and local artists Aaron Jin and Rheanna Atendido found themselves bonding so much that they launched The Aaron and Rheanna Best Friend Show. They have submitted their work to the Sundance Collab and have made their pitch video available to all on YouTube (watch their pitch here: https://bit.ly/3ffeURq)

Jin and Atendido met in college, have developed their artistic careers side-by-side, and were excited to talk with the IE about their new show in the same conversational style in a video, which the IE used to transcribe their interview.

Rheanna: We were in dance class together but we never talked because we like weren’t friends. Like we would literally go to dance class every day and then not talk to each other. I knew you because of Sierra, and we were both friends with Sierra and we both had a feud over it. I feel like every answer we have is kinda sarcastic and also kinda true.

Rheanna: True! And then we actually met doing a Les Mis cabaret. And we like hated each other. Until we didn’t? It was like Snapchat or something. We found out that we each use five seconds on Snapchat and for some reason that really sparked a connection.

Aaron: Yeah. I think we kinda realized that we actually had the same energy.

Rheanna: Yeah we were like using that energy to fight each other until we realized that we could use this energy… to fight for each other.

Aaron: I love that.

Rheanna: I think that’s what lends itself so well to us artistically too. Because we just fuel off each other so well. We have very matching and also balancing energy. I mean, college, right. We literally went through so much together. The partnership’s helped in every way, personally, artistically, spiritually. Romantically.

Jin and Atendido report that their show initially started as a cabaret episode, but then the pandemic hit, and the duo pivoted their creation toward a webseries instead:

Rheanna: And it was with the pandemic, so it was kind of perfect. Like something that we could work on creatively while we were stuck at home. You’ve had so much grace with me while I was going through a hard time personally. Like the times I was super stressed out when you were there for me like, “Hey I’m here for you like as a friend, outside of the project.”

Aaron: Can I mention the story about the time when you called me crying and you were like, “Maybe we should record that depression episode now” (because we have a short episode where we laugh a lot about depression), and I was like “no” and then you were like, “You really do care,” and then burst into tears again, or is that too real.

Rheanna. BAHAHAHAHA yes. That is the epitome of a working best friendship.

Rheanna: You were so gracious with me about communication and time and had so much care. It meant a lot.

Aaron: I mean yeah. We are dealing with a pandemic and personal stuff and surviving and everything. Any creative acts on top of that should be celebrated. This should be fun. We’ve been working on this so long now, that we even have different hair now than when we first started shooting. I think I need to write in a short episode introducing your new hair where I’m like, “Are you okay?” in reference to the haircut and stuff.

Rheanna: Omg, and then I just end the call.

Aaron: And that’s the episode.

In response to questions about why their partnership has proceeded so seamlessly, Jin and Atendido sometimes describe themselves as complementary parts of a math equation:

Aaron: We really went through a lot together. College, starting our arts careers, boys.
Sometimes even fighting over the same boys, but only hypothetically.

Aaron: You thought he was gay, and I was pretty sure he was straight, and we both wanted him for the other person. It was kinda sweet. Our lives usually parallel each other except when they don’t.

Rheanna: And when they don’t, they really don’t. Like, we’re cosine and sine lines, but sometimes we are both tangent.

Aaron: Yeah. I love that.

Jin and Atendido have even more in common: they are both participating in Seattle Opera’s Creation Lab. Atendido is developing a Filipino-American mother-daughter story about grief, and Jin is working on a father-son story in a cave:

Aaron: We’re all about the parent-child dynamic for the opera!

Rheanna: It’s been interesting because, well, I didn’t know a lot about opera to begin with.

There’s this expectation of what opera is in my mind, and then writing it my way. I wrote it in Tagolog, or part in Tagolog at least, because the story… well I’m Filipino. And the story deals with not only the grief of losing a person and a loved one, but also the grief of losing touch with one’s culture. In the process of writing, I’ve turned it over and completely re-written it three times now. In the first couple iterations, I realized that it was really heavy-handed, the way I was talking about culture, almost in a way that I was trying to explain culture to people because I was expecting people not to understand it. But literally people go to the opera in Italian and German and not understand it.

Aaron: Right. And I watched an opera in English and I didn’t even understand it.

Rheanna: I could just write it from my truth and let that be enough, because it is.

Both of these artists are involved in activism as part of their creative work, because neither of them believe these two elements can be separated.

Rheanna: I believe all art is political. Activism for me as a Filipino American writer looks like me telling Asian-American stories and reflecting our experiences. There are so many stories all about the immigrant story and the first generation. It wasn’t until “To All the Boys” where I saw stories where we just are. I want to tell stories about us. Us just like being.

Aaron: There’s like a lot more Asian-American stories in the mainstream right now, and I think the only consistent thing about Asian-American stories is that there isn’t a single Asian-American story. The Asian-American experience is so diverse. I know for me as an ABC (American-Born Chinese), I’m not too connected to my Chinese heritage, and most of the stories I tell come from my gay side of my identity. I feel like I oscillate between like really funny, wild stories that are like, “I can’t believe he just said that,” and then my more serious, parent-relationship stories. But even in those, I keep my sense of humor to bring these people together, and imagine the conversations that I would have with my parents if we talked more.

Despite Jin and Atendido’s clear joy in creating this new show together, both artists are looking forward to reaching herd immunity in relation to the COVID-19 pandemic:

Rheanna: I’m just excited to be in the theatre with people again. I don’t think I’m ever going to take off my mask for a long time. And go to parties.

Aaron I’m excited to be around people in public. And to go to parties and make out with people and friends, even though I didn’t really do that.  There’s one other side effect. There’s a certain age where Asian people just start to open up. I think since we don’t have kids, my dad’s starting to open up to my youngest brother. And since we were all home together, I happened to be there for it. It’s funny because I’m kind of the “disappointment” as the artist, but I care a lot about learning our stories and our cultural heritage and where we came from because of it.

Rheanna: Dealing with the stress of COVID, everything going on with Black Lives Matter and anti-Asian hate crimes and all the global chaos, I had to look at myself and figure out how I can make a difference in the world and how I can make it better. And I think the best way I can do that is telling stories.

Regardless, translating their friendship into a creative project has been a great learning experience for both Jin and Atendido, who have learned that what they contribute is even more important than what they can receive from a partnership:

Rheanna: Networking I have a hard time with. I hate the word networking. But like building new friendships, I’m all about that. The people I work best with are friends. Figure out who you are, what your art is, and how it’s interconnected. Find the people that, you’re not building relationships because this person can get me further along. You’re building relationships because you jive.

Aaron: Yeah, and be a good person to work with. Don’t be afraid to ask people for help, because people are nice and do want to help, but they’re also busy. So work on yourself first too. If you want to collaborate, then you have to be someone that people want to collaborate with.