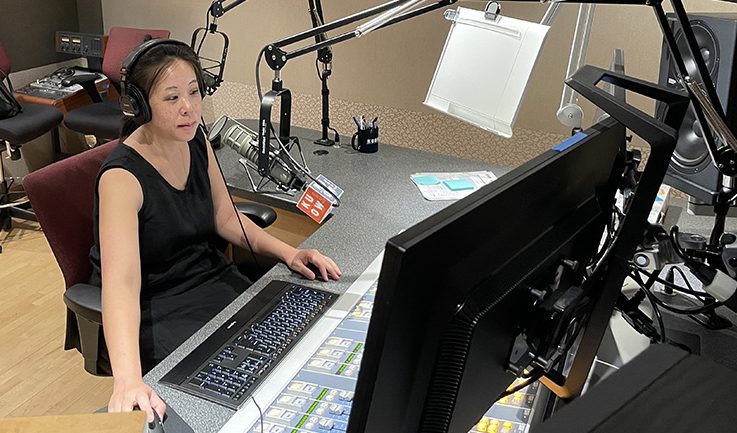 In the past few years, the International Examiner has focused on the poetry and the memoir and photographyof local writer and artist Shin Yu Pai, and now Pai is embarking upon a whole new project: a podcast entitled The Blue Suit, as part of the KUOW Shorts series.

NPR introduced Pai’s project earlier this spring, and the July 11th debut is now upon us. “Last summer, KUOW put out a call for podcast pitch ideas to the public,” Pai recounted. “I’d worked a bit with Jim Gates at KUOW on a storytelling event for THE WILD with Chris Morgan and queried him with some very rough ideas about a possible show that I’d been incubating.”

One of those ideas concerned an examination of everyday objects. “I’d been fixated on Congressman Andy Kim’s now famous blue suit which is in the collections of The Smithsonian,” she said. “Initially, I’d wanted to write a poem about that object.”

Pai’s background studying writing at the School of the Art Institute of Chicago and museum studies at the University of Washington drew her to this topic. “I have longstanding dual interests in storytelling alongside collections, archives and objects,” she described. “Objects tell personal stories but they can also be reflective of larger cultural narratives and values, the times that produced those objects.”

But Pai found that many archives and collections focus on narrow interests or agendas. “They leave out stuff,” she asserted. “I’m drawn to the things that aren’t represented in collections that could be part of museums but haven’t been collected.”

As a result, focusing on a mundane blue suit seemed like a perfect fit. “It felt like it needed a different format to tell the story and other related stories,” Pai said. “So the idea for the podcast was born.”

In addition to poetry, Pai writes personal essays and likes to tell stories about real people. “But I wanted a broader audience and to distribute these stories and reach audiences in a broader way,” she said. “My years of writing poetry have served me well in writing podcast scripts which rely on scene, voice, dialogue, image, metaphor, and narration.”

To help set the scene, Pai is collaborating with local musician Tomo Nakayama. “I’ve worked with Tomo Nakayama since 2017,” Pai reported. “Back when I was Poet Laureate for The City of Redmond, I commissioned him to set some of my poems to music which we performed together. We recorded those pieces for my book ENSO which came out in 2020.”

The partnership is reciprocal. “I’ve been very grateful for Tomo’s support over the years,” Pai said. “Tomo also curated me into the Ampersand Live! showcase for Forterra in 2019, which allowed me to create a performance piece based on a ritual poem that I wrote. The performance involved video projection, performance, and recitation.”

But Nakayama isn’t just making music for Pai’s words. “Tomo is also one of my guests in the first season,” she revealed. “We talk about Midnight Diner, Japanese flavors, and the longing for home, during the pandemic.”

Especially during the pandemic, the life of an artist hasn’t been easy. “Early on, I experienced layoff due to pandemic-related impacts on the sectors in which I worked,” she said. “The challenges of creating a career as an artist come down to financial realities like student loans and a mortgage, an underpaid nonprofit sector, scarcity of jobs with high competition in the cultural sector, and the costs of living in a very expensive city.”

But Pai reports that she received the support of her community. “My friend Amy Tipton who runs Sassafras Boutique in Belltown hired me to help her with marketing and publicity for art shows,” Pai said. “Lori Goldston invited me to serve as a publicist for the release of her album Very Old Songs. These unexpected opportunities reminded me that opportunities exist outside of institutions and that this is a good moment to invent a new path, one that centers creativity, community, and my own gifts first.”

She also made time for creative efforts. “I published two books during the pandemic,” she said, “including a poetry collection, Virga, that explored pandemic and the rise of anti-Asian hate crimes during these precarious times.”

In creating each book, Pai brings an interdisciplinary perspective. “I’m a very visual person with a photography practice and that allows me to think about poems differently whether on the page or in a physical space,” she explained. “Every book I make has very intentional visual element, even in the typography and cover art of my collections.”

For now, Pai is focused on her podcast due date, setting aside poetry until later. “Often, I’m prioritizing projects which have a budget attached to them or deadlines and that may guide what I choose to work on from day to day,” she said. “I’ve been fully focused on writing and producing The Blue Suit which takes a lot of thinking, listening, writing, editing, and rewriting.”

But she does have several plans in the making for the coming year. “I’m finishing up a limited-edition book with Editions Studio of a poem about Japanese nightingale floors,” she shared. “It involves scorching wood boards with a blowtorch.”

The burnt wood will eventually become book covers. “The poem will be adhered to the wooden covers and a hidden sound element will be placed under the poem,” Pai said. “That tiny audio player will play the sound of nightingale floors when the book is opened.”

Pai is also working on a haiku comics collection with her friend and collaborator Justin Rueff. “Blue Cactus Press in Tacoma will publish our collection in 2023,” she said. They will also be producing a risographic chapbook of some of their haiku comics under the guidance of printer George Wietor.

And while Pai is also planning to assemble a new collection of poems, she doesn’t expect to abandon the topic of her KUOW podcast. “I’m also working on a book version of The Blue Suit,” she said, “that I’d like to send around to publishers.”