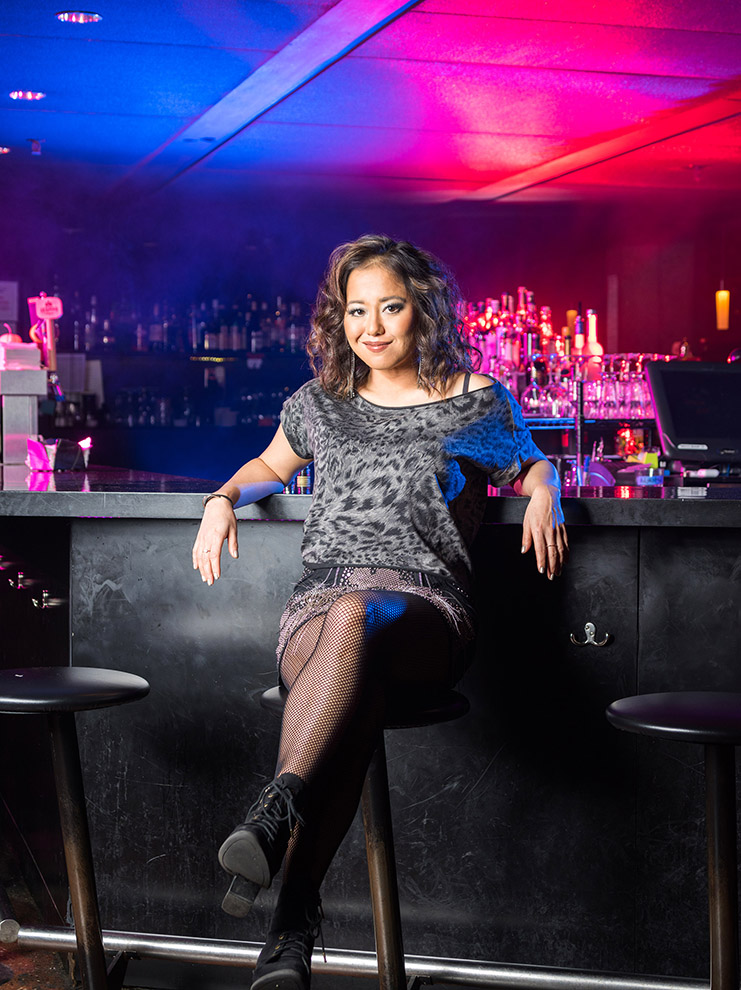 The musical Rock of Ages embodies the themes from an array of 1980’s rock ballads. While most 80’s rock bands featured male singers and musicians, this show also highlights the roles and voices of women, including performances by local actors Diana Huey and Sara Porkalob.

Both of these female performers were initially drawn to the music of this show. “I saw the show a couple years ago on Broadway and loved it and was so excited to get cast in this production!” Huey said. “Not only do I get to sing some super fun 80s rock, but I get to come home to Seattle and to the 5th to play with some of my dearest friends.”

Huey plays the role of Sherrie, who comes from small-town Kansas to Los Angeles to seek a career as an actress. “I love the journey she goes on throughout the show from just getting off the bus in a new city to really learning to stand on her own two feet and fend for herself,” Huey said. “I’m learning that she’s a lot stronger than I originally thought she was.”

Meanwhile, Porkalob plays the role of Regina Koontz. “My favorite thing about her, currently, is her verve, intelligence, and the fact that she becomes the Mayor of Los Angeles at the end,” Porkalob said.

Any musical will pose challenges for the performers, and this is especially true for one based on such familiar music. “When you’re singing such iconic songs, it’s hard to get the original voices out of your head when you’ve been hearing them for decades!” Huey said “I really want to make the music less of just singing an awesome rock song, but as a real narrative for Sherrie.”

Porkalob echoes this desire to interpret the music of Rock of Ages in a meaningful way. “’Don’t Stop Believing’ by Journey is the closing number for the show and ever since college, I’ve tried to stay away from it as much as possible,” she said. “It’s a karaoke favorite for drunk frat boys, and I’ve heard enough of it in my lifetime, but the first time we sang the song together as an ensemble, I was struck by how much our version didn’t bother me. I think I may end up enjoying the song once we open.”

The 80’s milieu also presents unique demands. “The biggest challenge I’ve encountered so far is having to dance on a bar countertop in high heels,” Porkalob said. “I haven’t fallen or broken any bones so keep your fingers crossed for me!”

Both performers are finding this show to be a notable learning experience. “Honestly, going to rehearsal everyday has been like taking a masterclass,” Huey said. “The other cast members of this show are so good and so funny. I’m in awe watching some comedic gold, hearing wailing vocals, and watching people pick up choreography and dancing it perfectly like they’ve known it forever. There’s always so much to learn from watching people be masters of their craft, and I get to do that every day.”

For Porkalob, Rock of Ages highlights our local context. “My character starts the show as a Los Angeles city planner and right hand of the mayor, then I turn into an activist, then I become the new Mayor at the end of the play,” she said. “My character’s arc has made me more invested in our own local politics.”

And as an activist herself, Porkalob hopes audience members will consider these links, as well. “Did you know that seven of the nine Seattle City Council seats are up for grabs this year including our very own District 7, Pioneer Square to Magnolia?” she asked. “Currently, the District 7 candidates are largely uninterested, but there’s time yet for people to throw their hats in the race.”

Rock of Ages runs from February 1 to 24 at the 5th Avenue Theatre, 1308 Fifth Avenue, Seattle.