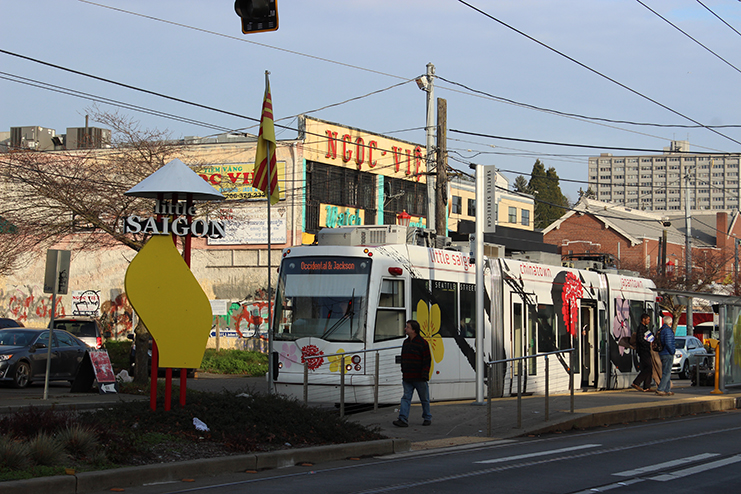 “I feel very connected to the neighborhood,” Valerie Tran, Operations Director at Friends of Little Saigon said.  “It’s like a cultural home for me.”

Tran came to Seattle in 2015 and considers the Little Saigon neighborhood as being a place where she has been able to reconnect with her heritage in a way that she wasn’t able to do so growing up in a predominately white suburb. With a background in urban planning, she is now project coordinating for the development of the Little Saigon 2030 Action Plan. It is intended to support future initiatives, projects, and efforts to support culture, community services, public spaces, small businesses, and safety in the neighborhood.

“I think that’s been a lot of the change that people have seen…in the pandemic, everyone, a lot of business districts, like little Saigon, have experienced the negative impacts: including decline in business decline and people visiting neighborhoods,” Tran said.  “That left a lot of room for more vandalism, and burglary. A lot of the businesses now have plywood up on their storefronts, and that has a sense of more like a sense of closure and not so welcoming to people anymore.”

Friends of Little Saigon had been advocating for funding for a couple years for this initiative since their previous 2020 plan had expired and received from Seattle’s Department of Neighborhoods last summer to begin the process of executing the endeavor. A leadership committee composed of local community leaders convened late last summer, and late last fall BERK Consulting was brought onto the team to help understand the gathered and existing data from the community.

“The leadership committee that we brought together is a collection of community leaders representing community organizations, health and social service providers, small business owners, property owners, mutual aid groups,” Tran explained. “We want to make sure that the plan is actionable and feasible…we just want to make sure that what we propose, and the actions of the plan are actually tied to things that can be implemented for the benefit of the community.”

The survey has been released to the public to gather more data from community members about what the specific needs are in the community. The survey will close by March 5, and they are hoping a draft plan will be formed later this Spring for the community to view and provide input on.

“It’s really important for us to hear from a broad range of community members, whether they live here [or] they work here on property, use services, shop or dine,” Tran said.

According to Tran, the Little Saigon 2030 Action Plan will be a document and tool that local community members can point to as they advocate for investments, additional resources, and fair decisions and processes over the next decade.  It will also be used as a resource that different agencies, organizations, and public and private developers can look to understand the Little Saigon better, and the needs and wants of the community. One topic that they hope to address is the rapid development of the neighborhood, and how it affected local community members and businesses.

“It was originally zoned [Little Saigon] for low-rise, industrial so that’s why you see the architectural fabric of the neighborhood is a lot of one-story warehouses…the zoning increased so that there could be higher rise developments for housing and commercial,” Tran said. “So that coincided with the tech boom in the region and opened the door for a huge influx of new development in the neighborhood.”

“It can also be a guide to developers who are not familiar with the neighborhood and want to know what the community prefers; this Action Plan will address a wide range of those questions and give specific recommendations for what the community desires for the neighborhood. This can influence the designs and architecture of buildings, preferences for how to use street-level/ground floor spaces, public realm improvements, and more.”