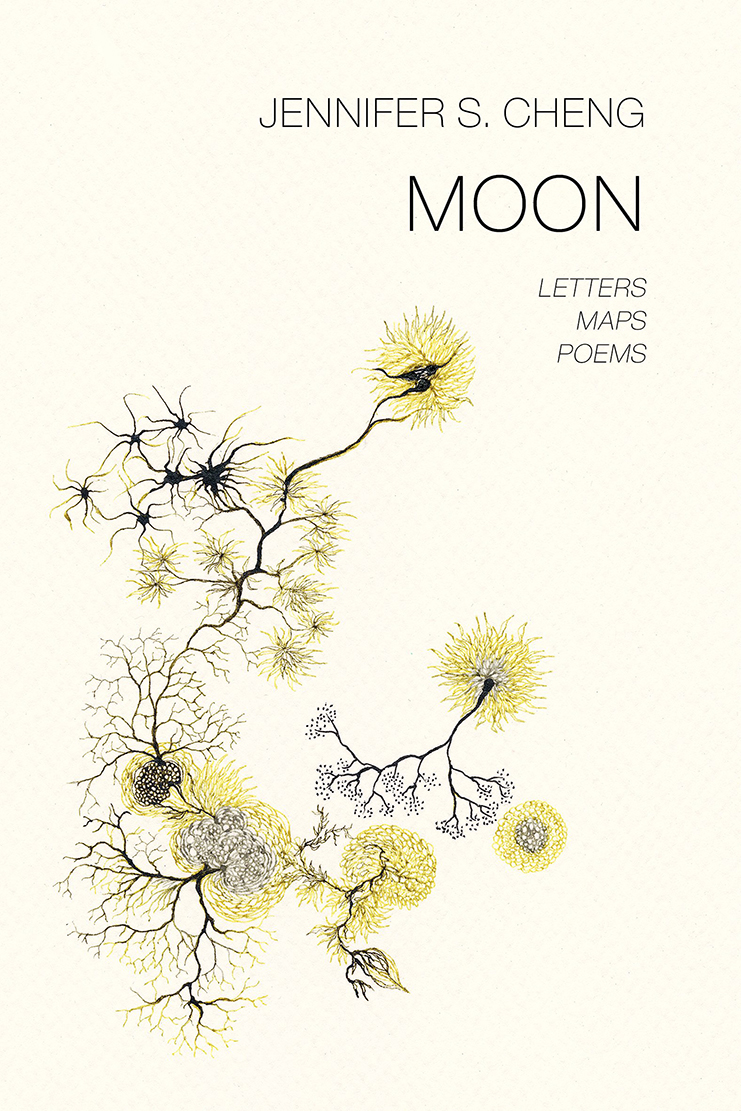 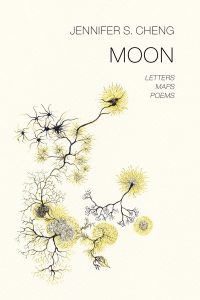 Here in the Pacific Northwest, there are nights when the moon plays hide-and-seek with the clouds, and there are bright days when the moon flits across a sunny sky. There are times when the moon is so elusive that to see it is to be reassured that the clear blue sky still exists above all the gray. It is a dreamy relationship, difficult to pin down. And that is the sort of relationship that I have with Jennifer S. Cheng’s collection Moon:  Letters, Maps, Poems.

The collection focuses on iterations of different legends from Chinese myth, but primarily on iterations of Chang ‘E, the goddess of the moon. Most poems seem to be voiced by Chang ‘E, and other poems reveal Nü Wa and Tin Hau, the goddess who created humanity and a sea goddess, respectively. The most narrative section of poetry is the final section in the book, {5}:  From the Voice of the Lady in the Moon.  Every poem in this section is titled “CHANG ‘E,” and they work together to provide a narrative of the moon goddess’s life.

However, sometimes it is a puzzle to get to this narrative section. The other sections are hazy and unbound, mythical even. Rather than piecing together a narrative, the other sections create an overwhelming mood of wonder, mystery, and sometimes, despair. The moon goddess is trapped at times and then at other times, she is free. There is a tension between finding home and leaving it.  In a poem titled after Nü Wa, Cheng writes, “What appears to be terra firma was likely water not so long ago.” What seems to be solid and real was once hidden. Everything is changeable, mutable. And with these themes, the dreamlike quality of Cheng’s writing continues visually. The poems have a lot of space in them and utilize unique section breaks, like the moon that floats in front of and darts behind clouds, untethered.

Cheng’s poems give many voices to Chang ‘E and brings us images that are always in flux, always changing. There are moments of spectacular imagery, like when Cheng writes, “She is listening for that/ever so tiny gap between the locust’s hum when the sound of it/wounds the air.” Those moments are tempered with dreamy meditations:

I would peel a single grape and serve it to you whole.  How does

one measure it?  It is not nothing; there is an ocean.  And the

ocean is a real space:  it has ridges, depths, the largest stretch of

mountains on the earth’s surface.

These meditations seem to always linger on the idea of a search for a home or finding the home in disarray:

For a body in travel is above all loosening itself, the slow migration

of tectonic plates.  It is the contradiction of losing homeland in

search of homeland, it is the rules it breaks, the displacement it

shapes, the silence of a hem torn and hemmed with thread, made

up after all by some perforation of gravity

After reading Cheng’s Moon:  Letters, Maps, Poems, you’ll be searching for the moon, wondering if it’s trying to escape our grasp or keep us centered in the universe.