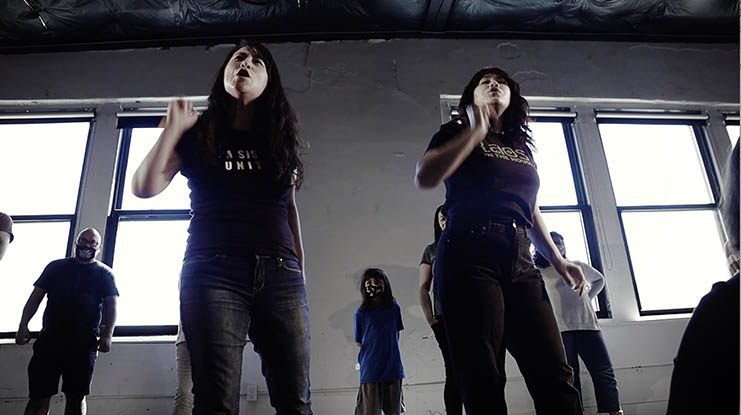 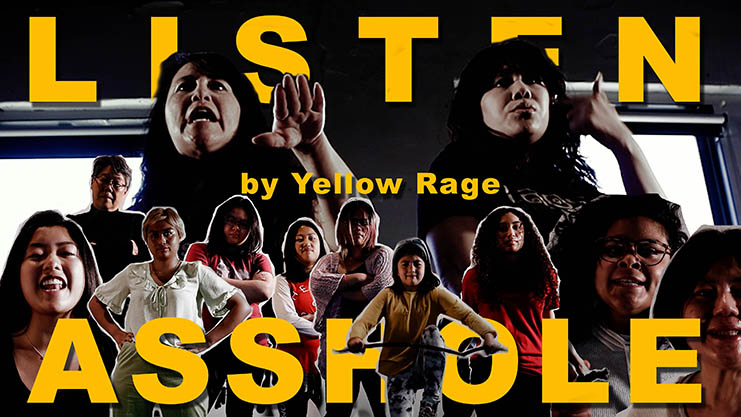 In the face of anti-Asian hate, Yellow Rage poetry duo Michelle Myers and Catzie Vilayphonh clap back with Listen Asshole, a newly-filmed video of their poem that is just as relevant today as when it was written two decades ago.

Listen Asshole was born of frustration and anger. “I saw it as a response piece to the many things I have been asked over the years as an Asian American woman,” Vilayphonh said, “and Listen Asshole sort of combines all the answers into one where I get final say to end that conversation.”

The poem is a direct expression of their chosen group name. “We were very up-front that we wanted to shatter stereotypes of Asian American women as being passive, quiet and demure,” Myers said. “When audiences first saw us perform back then, they were shocked because they had never seen or heard Asian American women be so angry or use profanity.”

Myers and Vilayphonh met in 2000 in a writing and performance workshop called Something to Say at Asian Arts Initiative in Philadelphia and wrote one poem together as members of Something to Say.

“Originally Listen Asshole was a solo monologue that had been written as an intro to a group ensemble performance show for Something To Say,” Vilayphonh recounted. “The crowd really enjoyed it and it set the tone for the rest of our fellow performers.”

The pair decided to continue their partnership and compete in the Def Poetry Jam slam tour when it came to Philadelphia at the end of 2000, and then they traveled to New York City to audition for the live Def Poetry Jam show at the 2001 HBO U.S. Comedy Arts Festival in Aspen, Colorado, in February 2001. To prepare for their audition, Myers and Vilayphonh developed Listen Asshole into a group poem.

This is when the duo first honed their collaborative creative process. “When Catzie and I compose poems together, we usually discuss and brainstorm our ideas about the poem first, starting with the concept and what we think we each will focus on writing about in our sections,” Myers described. “Then we write our verses separately.”

This preparation puts them in good stead for their meetings and rehearsals. “We read our verses out loud, hearing the tones and rhythm, and we cut up or rearrange our verses so that it all makes sense together,” Myers said. “And magically, our individual verses always fit seamlessly within our group poems as if we wrote each verse line-by-line together.”

It was during these early days that Vilayphonh first saw Anida Yoeu Ali, now a producer with global film company Studio Revolt, perform. “I saw Anida perform live as part of I Was Born With Two Tongues,” Vilayphonh remembered. “I was fresh out of high school and had no idea what spoken word poetry even was.”

But she was soon to learn. “That night, I saw four dynamic Asian Americans tell their stories in the most beautifully raw descriptive words of the English language,” she said. “Not Your Fetish, of course, really spoke to me as an Asian American woman, but I would say it was Anida’s line about ‘the pain heard on roll call days’ and having to watch our parents ‘work jobs Americans never really wanted’ that did it in for me, and the fact that she was Khmer and fellow Southeast Asian was such an admirable bonus!”

Myers agreed. “At the time, I had never heard an Asian American woman express herself in such a way before, but I myself had always felt that way,” she said. “Hearing her poems made me feel like I wasn’t crazy and that I wasn’t alone, and gave me permission to express that anger.”

Ali was pleased to meet the Yellow Rage team and maintain a friendship over two decades. “I believe the three of us had a reputation for being angry and bold with our poetry,” Ali said. “I knew of Yellow Rage’s powerful poetry from back in the day, and I knew that this moment called for their piece Listen Asshole.”

So she put on her producer’s hat. “My role was to bring the filmmaker and poets together to make this short film and secure all the resources available to make the production happen in a short amount of time and within a shoestring budget,” Ali said. “I had to convince Michelle and Catzie to re-perform their 20-year-old poem for this moment, and I had to convince Masahiro Sugano that this poem with these performers was the right one to make into a film.”

Persuasion was easy after Ali and Sugano attended vigils and rallies that left Sugano unsatisfied. “Masahiro had voiced how he felt that anger and outrage were completely absent from these events,” Ali said. “He wanted to see people get angry and more upset especially since APIA women and the elderly were being targeted.”

In response, Myers, Vilayphonh and Ali re-envisioned a filmed presentation of Listen Asshole. “We had three weeks to pull the production together in Philadelphia with all of us having tremendously challenging schedules,” Ali said. “The more we brainstormed, the more it was apparent that the poem needed to be performed in front of a community audience.”

Myers and Vilayphonh began to call upon friends who would join the pair in the video itself. “Even though Catzie and I started off writing our poems to express our own experiences and personal rage, we recognize now, 20 years later, that Listen Asshole has meant a great deal to so many people,” Myers said. “There really was no question that we wanted our poem to represent the collective anger and pain that many people in our community have been feeling for a very long time and to be the voice of the AAPI community demanding that our history and experiences will not be erased.”

Ali was impressed with the Philadelphia community’s support. “We were still in a pandemic and did not know how many people could actually show up to the film shoot, let alone be physically comfortable around other extras and the poets,” she said. “Thank goodness that Michelle and Catzie are so respected and so connected in Philadelphia that they were instrumental in providing us the community assistance needed to pull off this film project.”

Myers was gratified as well. “It became that much more meaningful to have our family, friends, students and supporters come out to be in the film,” she said. “I am deeply moved to witness how, through Masahiro’s vision, he took a poem that was written 20 years ago as a representation of my and Catzie’s personal rage and placed it within a chorus of community voices.”

In the new video, this community becomes a visible symbol of strength. “As an artist, I have come to incorporate visuals into my work as a way to speak to those who can’t attend, or fully understand the whole of the poems based just on language,” Vilayphonh said. “I believe that Anida and Masa’s vision of creating visual poems gives another dimension to a poet’s words, and their treatment of Listen Asshole is further proof of that.”

But it is the support of their audiences that has been the most profound for the two poets. “Some people responded positively to our work while others responded negatively,” Myers said. “There were times when we received hateful and threatening emails, and we even had other Asian Americans, including Asian American women, tell us that we were shameful and bad role models for other Asian American women. But for every negative comment we received, we also were blessed with supportive and beautiful responses.”

Yellow Rage’s work has also inspired others to speak out. “We’ve had other Asian American women tell us that they found their own voices through our poetry,” Myers said. “Some of them have even told us they became spoken word poets because we inspired them.”

She and Vilayphonh have even found themselves held up as role models. “Perhaps the comment that makes me tear up whenever I think about it was made by an elder we met in Hawaii who told us that he wanted his daughters and granddaughters to be just like us,” Myers recalled. “That kind of love and support sustained us when we didn’t always know if we could or should be performing anymore.”

For now, the poet-performers are just letting Listen Asshole spread organically. “We just wanted to show our love for our community,” Myers said. “This film belongs to the community now, and it’s really up to them where it goes from here.”