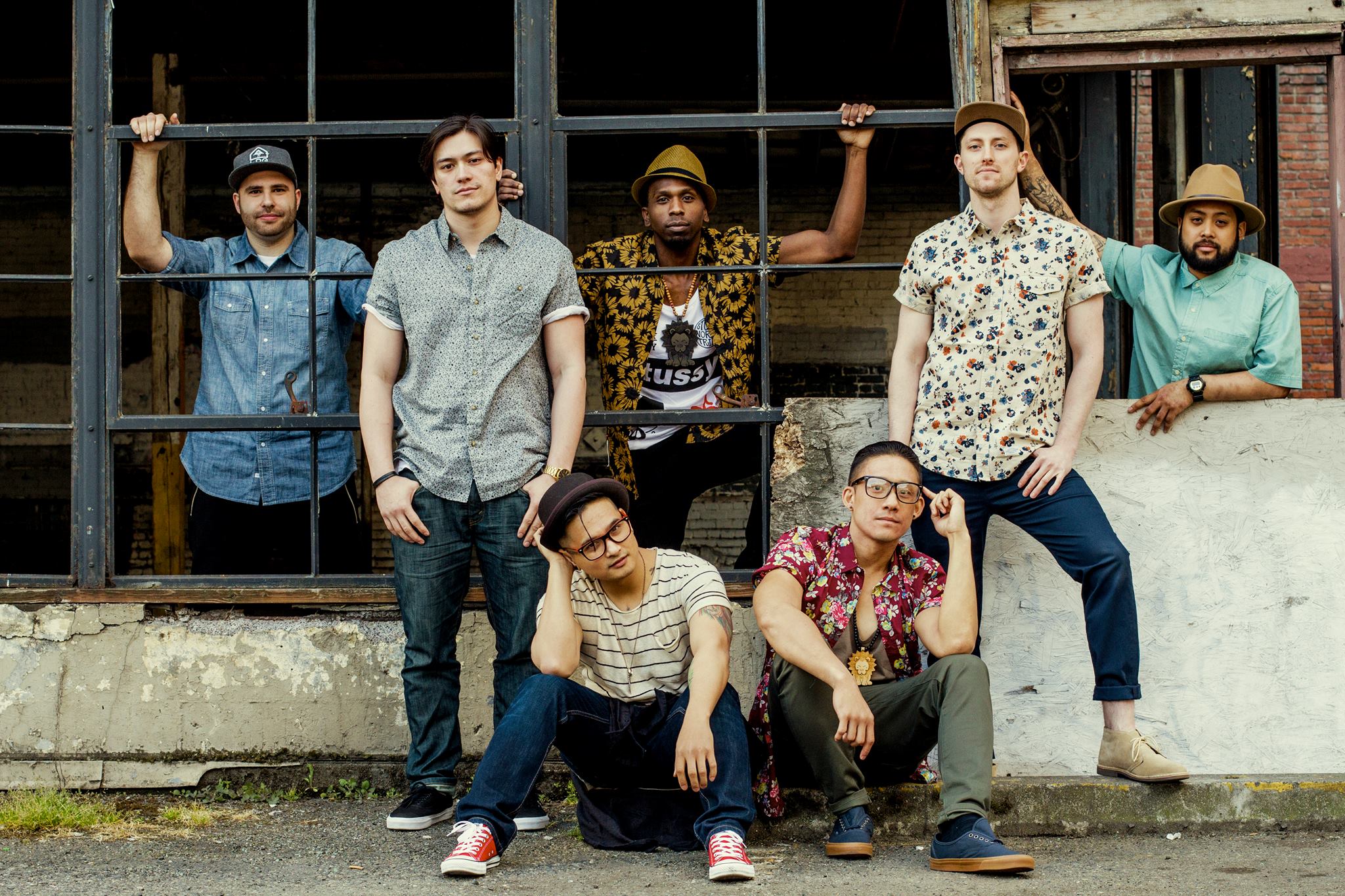 A week after returning from their first official South by Southwest (SxSW) Music showcase in Austin, the voices of Lions Ambition – vocalist Richard Austria and emcees Frankie Starr and Marlon Turner – sat down with the International Examiner to give an update on the direction their band of seven has taken since the IE profiled them in 2011.

Over dinner in a quiet Chinese restaurant, just blocks from the recording studio where they prepare songs for a promotional tour in Japan, I realized that to know them is to love them. The members of Lions Ambition are passionate about connecting with their fans, continually growing as musicians, and nurturing their homegrown brotherhood, with some friendships starting from childhood around a Bremerton military base.

I saw Lions Ambition for the first time when they headlined for the Seattle Asian American Film Festival in late February, 2018. Their dynamic performance, ability to connect with the audience, and, of course, the music itself blew me away. I was instantly curious. What was the story behind the band with a minority majority, frontlined by two Filipino Americans, one providing the soulful backdrop and the other an emcee alternating rhymes with an African American born in Okinawa, Japan?

Minji Chang is the global executive director of Kollaboration (kollaboration.org), which since 2006 has emerged as the premier Asian American and Pacific Islander (AAPI) talent showcase in North America. “Blown away” is also how she describes her first time seeing Lions Ambition.

Now with 14 city chapters, “Kollaboration had our first shows in Houston, DC, Seattle, and San Francisco the same year,” Chang said. “There was a real surge, a real growth period, of confident, amazing AAPI artists around 2010, when YouTube was taking off. The Kollaboration team from San Francisco took a group trip up to Seattle and the boys [Lions Ambition] blew me away.”

Officially formed in 2009 when vocalist Austria merged with Starr and Turner’s band, Lions Ambition won the grand prize at Kollaboration Seattle’s annual talent showcase in 2011. Later that year, they competed at its flagship show at the world-famous Nokia Theatre L.A. Live, now the Microsoft Theater.

During the past seven years, Chang has gotten to know the band as family. “They don’t have an ego, and they hustle very hard. This reflects in their performance,” Chang said. “They care about their craft and love their fans. They have an authentic message in an industry when things can sometimes be manufactured. They’re full of soul and very real.”

Kollaboration Presents: Asian American Spotlight was held for the second time at SxSW on March 15, 2018. Over the course of attending SxSW several times, Chang observed that its music convention, which offers networking and talent showcases on multiple stages, had a Hong Kong Night and K-Pop Night for Asian entertainers – but nothing for AAPI artists.

“Asian Americans have a specific identity and specific style,” Chang said. “So I wondered, how come the identity of Asian America is not represented?” After the proper introductions, Chang got down to business in setting up Kollaboration’s Asian American showcase, which launched at SxSW in 2017.

This year, SxSW officially accepted Lions Ambition to perform, and Kollaboration offered them a stage at the intimate Tap Room at the Market. “Lions Ambition was the perfect act to kick off the night because of their great energy,” Chang said. “They have a very distinct sound – funk/jazz/hip hop – and an electric, captivating stage presence.”

Since Kollaboration aims to break stereotypes and change culture, it is significant when its audience moves beyond a majority of AAPI representation. Chang said that only half of the SxSW Spotlight’s audience was of AAPI descent. This was ideal because it allows space for discovery of the next generation of artists in their move toward mainstream media prominence.

Coupling with the demographic variety in the audience, Kollaboration’s 2018 showcase was a true display of AAPI talent in all its culture-changing forms. Performers included Tim Atlas, indie acoustic artist from the Bay Area; Clara C, electro-pop artist from Los Angeles; and hip hop artists Uzuhan, G Yamazawa, and Ruby Ibarra, who hail from Atlanta, Durham, and the Bay Area, respectively.

“Some artists don’t want to be pigeonholed,” said Chang. “They just want to be ‘rapper’, not the ‘Asian American rapper.’ But Lions Ambition embraces this identity. They do it well, and it actually works in their favor…This attitude shows in their songs and what they say in their music. It just adds an extra layer of awesome. They stand for what Kollaboration is – ‘empowerment through entertainment.’”

Though recognized for their sheer talent and distinctive sound – the band has competed in New York City for television’s “America’s Got Talent” – Lions Ambition fully embraces the opportunities that have opened through Asian connections. “Now that we’re a bit older and smarter, we’re putting together projects that are more congruent with each other,” Starr said. “The last year of stuff we’ve worked on has been pretty consistent of who we are. Honestly, Japan kind of guided us there, too.” He was speaking of their current EP, Portrait of a Muse, which Lions Ambition created with Tokyo-based producer Marcus D, who hails from Seattle.

The band licensed their first song Brighter Days with Marcus D in 2014. This placement led to additional single placements and collaborations over four years with the same label, which distributes in both Korea and Japan.

Lions Ambition’s signature versatility extends to their attitude about fame. After “getting spoiled when we were younger” by opportunities like “America’s Got Talent,” “I don’t think the dream now is about becoming rich and famous,” Starr said. “Now it’s about doing something you care about, with the people you care about, living a normal life and being okay with it.”

“This journey humbled us,” Austria agreed. “We look at it [success] differently. You … ask yourself if this is what you really want to do. We understand that we need people. We need connections. Not only with the band, but with the people that we’re trying to connect with.”

When asked who those people are, Starr said, “The people that listen to our music are probably the people we’d want to hang out with in person.” Austria added that people resonate with the songs they put out because they tell stories about true life events, often about overcoming struggles.

For Lions Ambition, making music is a means to connection – spending time with old friends now that the boys have grown up, and giving audiences something multidimensional to respond to. They hope to return again to SxSW and play progressively larger stages.

Kollaboration’s Chang remains hopeful for her band family-friends. “SxSW showcases up-and-coming artists and can be a real affirmation to them. It’s a breeding ground for talent and opportunity for discovery. You never know who’s in the audience.”

Lions Ambition will play local summer festivals and be featured June 15, 2018, on the TV show “Band In Seattle.” They will headline two back-to-back shows at Barboza on August 23-24, 2018. Their music is available on Spotify, Amazon Music, Apple Music and iTunes. www.lionsambition.net.