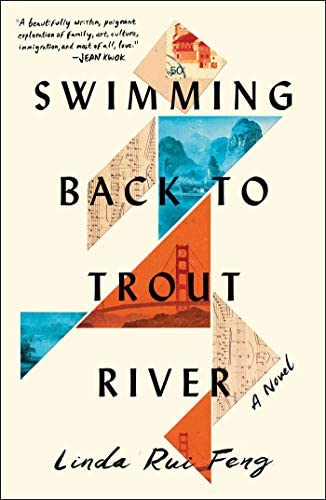 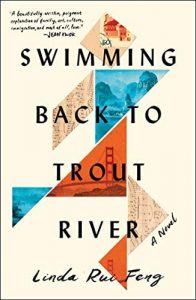 Reading Linda Rui Feng’s Swimming Back to Trout River is to experience a poetically written, lyrical, and emotionally poignant novel. Feng’s greatest strengths are her ability to capture special defining moments within and between her four main characters: ten-year old Junie who is born with “nothing below her knees—no tibias, no feet,” her parents Momo and Cassia, and Dawn—a violinist Momo meets during his time as a university student during China’s Cultural Revolution.

There are lovely, understated moments like when Junie asks her grandfather as he washes his feet before going to bed: “Your legs grew roots, Grandpa…like those trees by the river…Do you think my legs will grow roots like yours, when I’m older?” Or Momo’s thoughts after Dawn asks what it was like to hear all this music for the first time: “Like wading in a too-fast river before learning how to swim.” And Momo’s recollection of his early youth: “Momo felt a pang. What he could recall wasn’t a single thing he could put a name to, but more like shards of a mirror, each sharp but also gleaming, containing many reflections yet nothing in its entirety.” Gems like these pop up constantly.

Throughout this debut novel is the theme “it was the closest [Cassia] had felt to [Momo] in a long time. After all, wasn’t it true that to love someone is to figure out how to tell yourself their story?” As each character’s relationship with others grows, much is left unspoken and revealed mostly through flashback. Junie’s grandparents don’t discuss her future without lower legs. Momo and Cassia don’t speak of a stillborn son. And Dawn’s decision to defect to the United States when she is a delegate from Beijing, exchanging experiences with American musicians, is barely articulated even to herself until the moment arrives. It is this understatement that gives the narrative its power.

Employing a third person omniscient point-of-view and written in third person, in many places Feng is able to give voice to what isn’t directly spoken: “Grandma could not tell Junie that she hadn’t expected Momo to survive his childhood…Grandma knew that even hearty children were plucked off quickly in those years, and she didn’t expect better odds for their sickliest-looking son.” Indeed, the theme of what’s best left unspoken graces the novel with understatement for such challenging times. Times like when Dawn watches her grandfather in front of six Red Guards: “He reached over and grabbed Dawn’s hand and the instrument’s neck, he lifted it up high in the air and hammered it down with all his strength onto the steel bedpost.” This results in complex emotions in Dawn: “Dawn could not look at her grandfather. There was something about the way he chose to let her feel the crunch of wood in her own hands that made it hard to forgive him, even if he was trying to steer her away from disaster.”

Dawn, too, “vows to speak less after her grandfather died, because she knew she couldn’t count on herself to say the right things, and because she knew that her ambition was the wrong tonality and color for the world. But the problem with speaking less was that she was forced to listen.”

Along the way, to deepen Swimming Back to Trout River’s story, Feng introduces three “untranslatable words”: yuanfe, zaohua, and ciji. Here again, an omniscient narrator explains yuanfen as “[implying] that there’s an invisible mesh that loosely bound people and circumstances.” Therefore Junie’s delivery and birth defects appearing on a specific date ties with a secret from her mother, Cassia’s, past and is “her fault.” Tied to this is zaohua, Cassia’s transformation upon witnessing the death of a young man that she loved but barely interacted with, and realizing that moment. Finally, there is ciji or the psychological trauma that may cause someone to behave erratically. These terms help to deepen the gulf Feng’s characters carry with them as they continuously hurt and heal and hurt their loved ones. Momo, too, realizes “whatever was about to happen, its course could be easily nudged into a different orbit by the choice of a different word, by a decision to turn your head this way and not that, or by letting your hand touch another hand on an armrest in a concert hall.”

Much happens in the narrative under the surface like poetry. Poetry is often meditative, offering up imagery and layered meanings instead of black and white answers. Swimming Back to Trout River condenses many years and settings. One can be left wanting much more than its mere 260 pages, covering the years between the 1960s to the 1980s in China and the United States. The deus ex machina ending can come as a bit of a shock.

It wasn’t until a second and third reading that I realized how well the plotline is structured to arrive at its conclusion. There’s the metaphor of “swimming” where Dawn plunges into music “like it’s the ocean.” When Cassia lives in San Francisco, she is introduced to the decaying corpse of a whale. And after reading her father’s letter and fearful of leaving her grandparents to rejoin him in the United States, Junie promises “I’ll learn to swim for a long way.”

By using these deliberate and careful approaches, Swimming Back to Trout River, in its quiet powerful writing, triumphs with its many surprises.