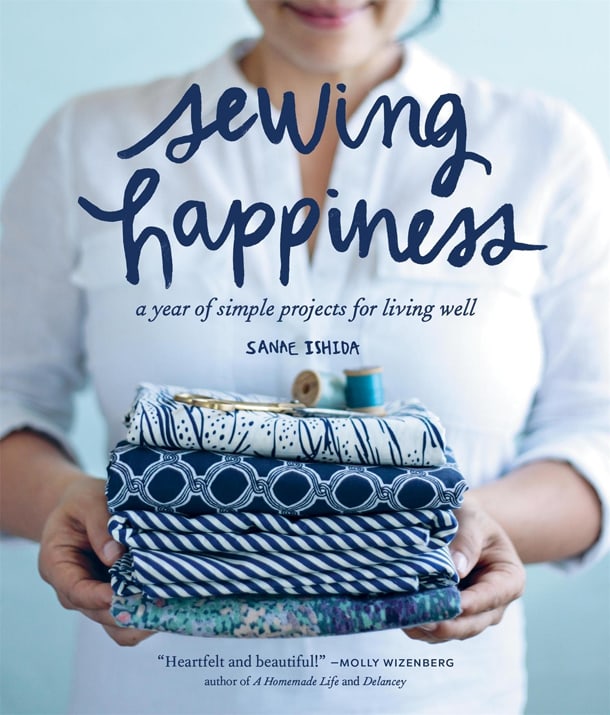 Seattle author, Sanae Ishida (Little Kunoichi, The Ninja Girl, 2015), offers an unusual and appealing blend of personal memoir, guidance for balanced living, and elegantly designed sewing projects in her latest publication, Sewing Happiness: A Year of Simple Projects for Living Well (Sasquatch, 2016). An active online presence thanks to her regular blog entries (sanaeishida.com) and Instagram feed (www.instagram.com/sanaeishida), Ishida offers readers an intimate view of some of her most vulnerable moments—and, most importantly—shares the wisdom she has acquired through these struggles.

Divided by season, you will find among the 20 projects a stylish Origami Pillow in the Summer section, a darling Starter Dress for a little girl in the Fall, a Fortune Cookie Advent Calendar for Winter, and a classic Sashiko Trivet for Spring. While the book does cover some sewing basics, rather than offering detailed patterns and minute step-by-step directions, Ishida’s approach is one that fosters exploration, risk-taking, persistence, and nudging yourself to go outside your comfort zone.

We sat down in a café one Saturday morning to discuss her journey. While her book is visually stunning—Sewing Happiness conveys an aesthetic she describes as “Japanese meets Scandinavian meets French”—what makes it stand out from other textile arts books is her underlying philosophy explained through several personal essays. Before you even get to the patterns, you are encouraged to embrace a mindset that lets go of perfection as a goal.

Raised in a home teeming with opportunities for creative pursuits and acceptance of process over product, Ishida nevertheless embraced a workaholic perfectionism that ultimately took a tremendous toll on her health, relationships and career. Seeing everything in her life fall apart at once as she was felled by an autoimmune disorder, fired from her prestigious job, and saw her most important relationships faltering—in other words, facing down failure, her greatest fear—Ishida realized that she had to reassess all the strategies that formerly seemed to guarantee success.

Two of the most startling and valuable takeaways she articulates are: not waiting to start things until you feel like doing them and embracing constraints. In a society where happiness is often framed as doing what you want, and in which casting off limitations and boundaries is seen as the path to freedom and fulfilment, this might seem like strange advice. However, Ishida talked about realizing that, at the very lowest point in her life when she had the least energy to do so, she simply had to change. The Power of Habits by Charles Duhigg introduced her to the concept of “keystone habits,” or singular new behaviors that have a ripple effect that is much larger than you might anticipate.

Ishida set off on her road to recovery with baby steps that she summarizes as “sleep, walk, chop” (p. 49): prioritizing getting enough rest; then, as her energy began to return, doing something active every day, even if it was simply a walk around the block; and adding vegetables to each meal. Initially she didn’t necessarily feel like doing any of these things, but by making them habits, something that she would do every day whether she felt like it or not, they became integral parts of her life that she didn’t have to actively make decisions about.

As sleep, exercise, and cooking from scratch improved her physical health, Ishida began to think about ways to heal her spirit. Recognizing that creative pursuits fed her soul, she returned to sewing, in particular, starting a blog to share her creations, which in turn sparked connections with like-minded women in the blogosphere. She writes that finding this path required her to listen to her intuition, which she learned “needs ample space and silence and time and gentle play to be heard above the din of “should”’ (p. 33). Slowing down and creating beautiful things by hand also helped Ishida strengthen the bonds with her family and friends that were neglected during her workaholic stage.

In a delightful twist, engaging in something that brought her joy led to a book contract that at first seemed like a dream come true: it could be anything she wanted! She had free rein to put her vision into print in any way she wished … and yet she felt stymied and paralyzed. Where to begin? By setting a few parameters for the book—a color palette, an overall look, projects that did not rely on paper patterns—she was able to channel her energy in a productive way.

Similarly, the constraints of living without a car for the past six months has forced Ishida’s family to make careful choices about where they go and how they spend their time. Using public transportation and carpooling with friends has strengthened bonds with their community, and walking and cycling more has been good for their health and the environment. Overall, being forced to slow down has led to a pace of life that they enjoy greatly and could not have anticipated before their experiment began.

Mothering is a central part of Ishida’s identity, and here too the insights from her crisis have led her to make different choices than she may have otherwise. The section in her book on letting go of expectations will likely touch a chord with many, as Ishida describes struggling with unrealistic beauty standards, and recognizing that for her daughter’s sake she had to accept and appreciate her body. Sewing clothes that looked and felt beautiful—and that made her happy to wear—became the ultimate goal, rather than simply trying to look thinner. Ishida talked about the wonderful example provided by her mother who, despite the financial struggles of immigrant life and raising three children, never stopped painting. As a child, Ishida and her siblings would watch their mother paint, absorbing the idea that motherhood, even in trying circumstances, does not necessarily mean putting your own artistic life on hold.

She was also allowed as a child to be bored, and this boredom fueled creativity as she and her friends invented wildly imaginative games. Bearing this in mind, Ishida and her husband have been mindful about their daughter’s extracurricular activities, supporting her in pursuing her affinity for music, but not worrying if she isn’t productively occupied every moment of every day. Carving out the time to experiment, create, fail, and try again, as well as to connect with other people without the aid of digital devices, forms the bedrock of their lives.

Creativity, to Ishida, is not about the status of owning highly-priced handcrafted artisanal items or about the external validation of engaging in competition with other artists. For her it’s about living a life of integrity, expressing her values in a way that brings joy to herself and others, making rather than simply consuming, adding beauty to the world rather than sitting and scrolling on digital screens, and stretching both her practical skills and her inner tolerance for making mistakes and going out on a limb. Those who enjoy sewing will find much inspiration in Sewing Happiness, but even if you never intend to try any of the projects, Ishida’s essays pose deceptively simple questions that have the potential to spark tremendous change for the better.