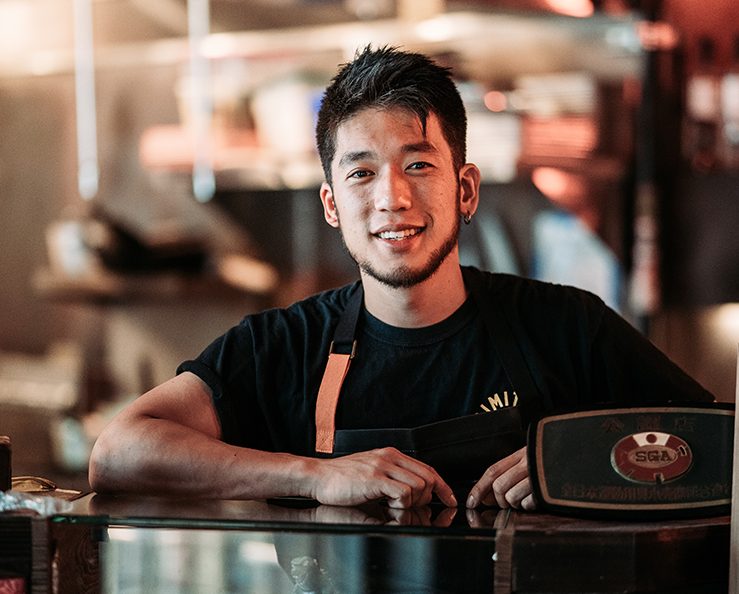 “We are opening Taku for indoor dining this week, so we have a lot going on,” said the 31-year-old chef and restaurateur. “I am excited and a little scared. But I am always excited and scared. That’s how I am. I am scared of things like the POS [point of sale] machines going down in the middle of service. Things like that. But then I got over it. I always do. In the end, I just want to cook good food.”

It’s his sunny disposition and positive energy that no doubt earned him the title of “Fan Favorite” in this latest season of Top Chef. It was a feel-good season that ended in controversy with previous sexual harassment allegations surfacing against the winner, Austin-based chef Gabe Erales. Erales, who beat out Nakajima and Houston-based chef Dawn Burrell, was later fired from his restaurant.

Nakajima did not speak on the allegations against Erales. In our conversation, he focused on his experience on Bravo’s popular reality cooking show and how it changed him both as a person and as a chef. Nakajima, a three-time semifinalist for the James Beard’s Rising Star Chef Award, described how working with a big television crew allowed him to grow and learn from so many people he had not been exposed to before.

“I really enjoyed working with TV production people. It was so fun meeting and learning from people from all kinds of industries,” said Nakajima. “You grow as a person, and you get insights on how to become a better boss.”

For Nakajima, being a better boss means making some tough changes at his current and only restaurant, Taku. The Japanese fried chicken restaurant in Seattle’s Capitol Hill neighborhood, which up until this week operated as a take-out only spot, has drawn in bigger crowds since Top Chef began airing. Nakajima said he now employs about 15 hourly workers. A big shift from when it was just him working by himself, doing everything he can to keep the doors open.

“My next goal is to pay my staff very well and keep them happy so they have no reasons to leave,” said Nakajima. “I hired back a lot of good staff, and I did that for a reason. For a long time, I was holding onto people who weren’t always the healthiest for me, and that just was not fair to me, and it wasn’t fair to the rest of the staff. I want to teach these young kids that are coming in now… 21 – 22 years old…that they need to work hard but also find a balance in life.”

Nakajima, who has been open about a lot of struggles he’s had in the past few years, from closing his other restaurant Adana to being involved in a bad car accident to getting shingles. He said he’s now looking forward to good things to come including a revamped business plan for Taku.

“I want to make my company more project-based. I want the managers to come and tell me what projects they want to work on and what percent of the profits they want. Whether it be online, retail, catering, we have a lot of side gigs going on right now. I think this way, my employees are more invested in all sides of the business. I don’t know exactly how this is going to work yet, but I am hoping in three years it’s going to show great results.”

In terms of what’s next for his culinary future, Nakajima did hint about an exciting project involving a special “sauce”. Fans of the show got to see his creativity and passion shine through many of his Top Chef dishes, and Nakajima said it’s been fun interacting with viewers during the course of the show. That was a big motivation for him to launch his YouTube Channel “MakeUmami” showcasing many of the recipes viewers saw on air, from soy braised fish head to Japanese curry.

“I really enjoyed making these videos,” said Nakajima. “It’s really creative and it lets me continue to interact with the community in a really cool way.”

And when it comes to supporting the AAPI community, Nakajima, who has lived and worked in Japan, said it’s been meaningful to give back through charity dinners he hosted with his fellow Top Chef contestants. The last event raised nearly $10,000 for the Seattle Chinatown International District Preservation and Development Authority. Nakajima also recently hired some security to patrol the International District neighborhood on the weekends to help boost safety for business owners and residents.

“It’s really hard for me to see all the break-ins and other things going on there,” said Nakajima. “I grew up here so that’s my community, too. Even though my restaurant is not in that neighborhood, I really feel for the people who live and work there.”

As for his take on the future of the Seattle food scene, Nakajima is happy to see things reopening again. But he says after seeing firsthand how COVID-19 affected so many restaurateurs and business owners, he’s reminded that you have to work smart and prepare for the worst.

“It’s like getting heartbroken after your first relationship, you know? You become more cautious,” said Nakajima. “But that’s part of being a good boss, you have to plan to keep the lights on when things get tough again. You need a backup plan. I just believe in working hard and being polite to people. I want to showcase what it means to be a good person, good manager, spread that culture one person at a time.”