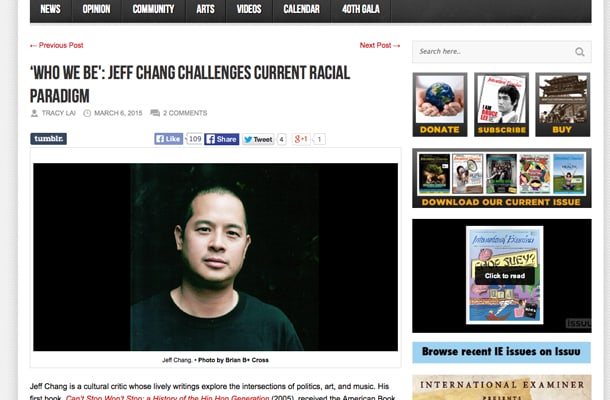 The article, “‘Who We Be’: Jeff Chang challenges current racial paradigm,” written by Tracy Lai, is good. The following statement could be further improved:

“Hawai‘i, as the last state to enter the union in 1959, more closely resembles the post-colonial world and the continued Hawaiian sovereignty movement underscores this tension.”

There is no treaty of cession annexing Hawaiʻi to the United States, which makes it an occupied State. Under the laws of occupation, the occupant does not acquire sovereignty over the territory, which means Hawaiʻi did not technically enter a union in 1959. In other words, occupation and admission are mutually exclusive. Since Hawaiian sovereignty has never been transferred to the United States, what you have in Hawaiʻi is a de-occupation movement to impel U.S. compliance with the laws of occupation.

CONTINUITY OF THE HAWAIIAN KINGDOM by Dr. Matthew Craven
Reader in International Law SOAS, University of London
Being a portion of a Legal Brief provided for the acting Council of Regency
July 12, 2002
http://www2.hawaii.edu/~hslp/journal/vol1/Craven_Opinion_(HJLP).pdf

THE AMERICAN OCCUPATION OF THE HAWAIIAN KINGDOM: BEGINNING THE TRANSITION FROM OCCUPIED TO RESTORED STATE
A DISSERTATION SUBMITTED TO THE GRADUATE DIVISION OF THE UNIVERSITY OF HAWAI`I
IN PARTIAL FULFILLMENT OF THE REQUIREMENTS FOR THE DEGREE OFDOCTOR OF PHILOSOPHY IN POLITICAL SCIENCE
DECEMBER 2008
By David Keanu Sai
http://www2.hawaii.edu/~anu/pdf/Dissertation(Sai).pdf

THE CONTINUITY OF THE HAWAIIAN STATE AND THE LEGITIMACY OF THE ACTING GOVERNMENT OF THE HAWAIIAN KINGDOM
August 4, 2013
By David Keanu Sai, Ph.D.
http://hawaiiankingdom.org/pdf/Continuity_Brief.pdf