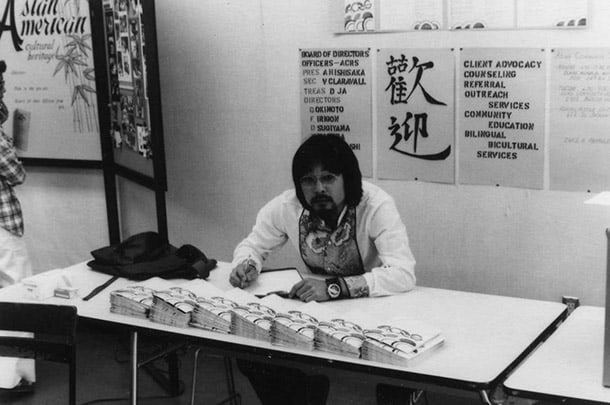 The late ’60s and early ’70s were a time of great social change. Protests against the war in Vietnam, the emergence of the women’s movement and the growing expansion of the civil rights movement led by the black community dominated the political landscape. These efforts, led by students, took over the streets and ultimately shut down the freeway. In the Asian community, activism emerged as well.

Locally, the potential infringement of the King Dome on the International District mobilized the Asian community to fight the development and make our case known to the powers that be. We marched in the streets and right into King County Executive John Spellman’s office.
Out of that social activism ACRS was born. It was fueled by young college students, and in particular social work students from the UW School of Social Work. The all-volunteer effort was led by elders in the Asian community like Dr. Min Masuda from the UW, Professor Anthony Ishisaka from the School of Social Work and Dr. Lindberg Sata, director of Harborview Community Mental Health Center. And of course, Bob Santos of InterIm took us under his wing and guided us throughout our developmental years.

We opened our doors for service one day a week in 1973 at Blaine Memorial United Methodist Church with the support of the congregation and Reverend Miyake. At the time Asians, were considered to be the “model minority” because we didn’t make waves and did not show up in crime statistics or other data points that suggested problems. That changed in the early ’70s when there was an epidemic of drug overdoses in the Asian community primarily attributed to heroin and barbiturate use. The model minority image started to crack. Similarly, leaders in the mental health field like Dr. Sata were perplexed that Asians were not seeking mental health care.

We knew there were numerous Asian clients in state institutions, many of whom could not be released into the community because of a lack of culturally and linguistically appropriate care. We believed that if we provided mental health care that was culturally sensitive and spoken in the native language, that people would come. And they did. In that first year we served 70 clients.

ACRS has thrived since those early years now serving a multitude of ethnic groups in dozens of languages. It has continued its emphasis on social justice as a voice for the Asian American and Pacific Islander community and other communities of color. Of special note is ACRS’ leadership in creating broad community collaborations which advocate for social justice. The Minority Executive Directors Coalition and Asian Pacific Islander Coalition are notable examples.

In November 2016, the world changed for many of us when the unthinkable happened and an individual was elected who could not be more anathema to the middle class, poor people, people of color, women and refugees and immigrants. D.C. is a long distance, but there are things we can do at home to fight these heinous policies. That’s why we restarted “Friends of ACRS.” ACRS does things I could not do alone. They advocate for all of us, they connect with key partners, and they do the background research.

That’s why so many of us, from Theresa Fujiwara and me, to Sue Tomita, Selina Chow, Peter Tsai, Marcia Fujimoto, David Della, Rita Brogan and Emma Catague have re-engaged with fierce conviction. We need your help to mobilize the resources to fight the craziness emanating from D.C. Please join the Friends of ACRS as an advocate, volunteer or donor. We need all the help we can get.

ACRS turns 45 this year. Come celebrate with us on Saturday, October 27 at the Hyatt Regency Bellevue. Find more information at www.acrs.org/gala.