The following is a letter sent to Mayor Ed Murray from 10 community members in Seattle’s International District/Chinatown regarding public safety in the neighborhood:

The International District Chinatown is the oldest existing ethnic neighborhood left in Seattle. Working with property owners, business owners, district employees, and most importantly, neighborhood residents, our community service agencies have worked to keep the C-ID a vibrant and safe neighborhood for all.

Several new housing developments are scheduled to open this spring and early next year. These new affordable and market rate units along with our existing housing stock will bring along sought out balance of housing diversity that will encourage new families to live in our neighborhood. As we work to preserve the existing culture while gearing up the new tenants to join our community, we are facing grave problems with a dangerous street element that has taken over our neighborhood.

As we continue to grieve the loss of Donnie Chin who was shot and killed on July 23rd of last year, we must live with the fact that the killers are still at large. In addition to Donnie’s death, our public safety situation continues to deteriorate, as people without homes have established unregulated tents and shelters alongside public spaces, like Kobe Terrace Park and under I-5 on Jackson Street, King Street, and Dearborn Street. As a reminder to the City, our community co-existed with regulated tent cities, such as Nickelsville. We are, however, inundated by the proliferation of an increasing number of unregulated tents and open camping that have settled on our streets.

Our C-ID residents, employees, and visitors increasingly have to navigate through an obstacle course of drug users, dealers, drunken troublemakers, human waste, bodily discharge, and a pile of trash that can reach as high as six feet adjacent to our community food bank. This garbage draws rats and other vermin. If that is not bad enough, car prowls and customers of our businesses are being harassed and even intimidated. In sum, our neighborhood is facing major public health and public safety problems.

Members of the Seattle Police Department recommend that we call 911 when problems arise. The problem, however, is when 911 calls are made, we don’t receive an immediate response or attention to our request. A recent example was when a young dad and school age daughter were selling Girl Scout cookies in Hing Hay Park last month. Unfortunately, a vagrant threatened and intimidated the two for fifteen minutes. They were then bothered enough to place a 911 call for assistance, but after waiting 30 minutes with no SPD response, the father and daughter were forced to leave the area.

As a first step in recognizing our current situation, we urge the immediate closure of unregulated homeless camps in the International District Chinatown community. The City should work with these individuals to help them find alternative places to stay and remove these tents. The City should additionally conduct a major clean-up of these areas, including the disposal of garbage and unclaimed property, restoration of damaged properties, and disinfecting areas that have been utilized as open restrooms. In addition, we would like to see regular beat patrols to be implemented during all shifts. 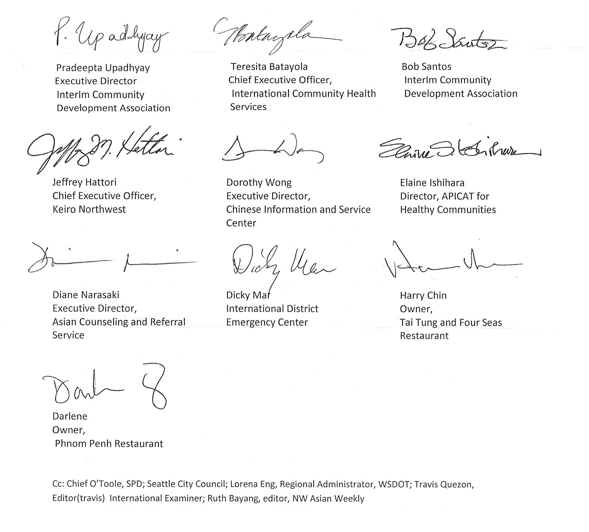