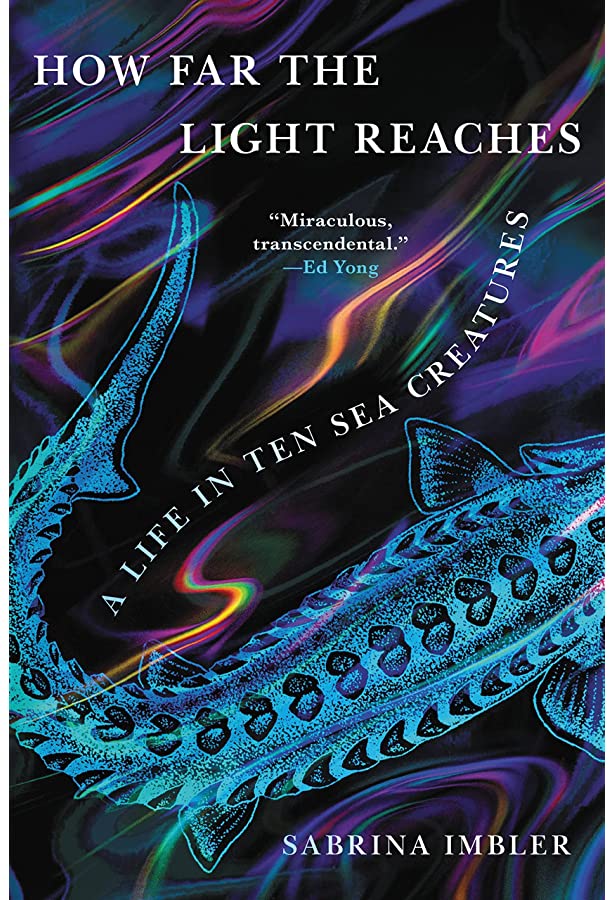 In “How Far the Light Reaches”, writer and science journalist Sabrina Imbler weaves together descriptions of familiar (goldfish) and unfamiliar (sand striker) sea creatures with poignant stories and intimate observations from their own life and experiences. Imbler reveals to the reader the wonder, uniqueness, and unexpected familiarity of these sea creatures. The result is a fascinating examination of the parallel motivations of sea creatures and humans alike; illustrating how appreciating one can give insight into the other.

Interestingly, the book begins with an essay about a goldfish, which is far from what most people imagine as a “sea creature”. As Imbler notes, most people do not give much thought to goldfish beyond them being innocuous pets in bowls on kids’ shelves – their claustrophobic existence justified due to their small size and remarkably short, 3-second memories. Imbler explains to the reader that goldfish actually can retain memories for months, perform complex tasks, and are extremely hardy in order to survive the toxic environment of the average goldfish bowl. In fact, “goldfish are so good at living they…become an ecological menace” when released into the wild where they can reach their full potential as prolific, ravenous, and highly adaptable fish. However, to Imbler – a queer, biracial person growing up in the humanmade landscape of suburban California – a goldfish’s surprising ability to thrive once released from captivity was enviable. Imbler yearns to share the goldfish’s ability “to invent a future that no one expected of you.”

We learn more about Imbler’s family in the next chapters: a mother octopus that starves herself in order to continuously protect her clutch of eggs reminds Imbler of their own mother’s obsession with being thin and her desire for Imbler to also “be skinny so that things would be easier”, which ultimately led to them both to disordered eating. In another chapter, Imbler introduces the reader to the prehistoric sturgeon, a fish that has flourished for 200 million years, but is now on a path to extinction due to dams and pollution. In the present environment, a sturgeon’s best chance of survival is most likely to be born in captivity and spend its entire life far from home in an aquarium, which evokes Imbler’s grandmother’s harrowing flight from the Japanese invasion of China and ultimate relocation to the safe, but disorientingly foreign, United States.

Imbler recounts their journey finding love, acceptance, and community by relating the captivating discovery of hydrothermal vents on the ocean floor. These oases of heat support a dazzling array and density of life in the freezing desert of the deep sea and are analogous to the safe queer spaces and community the author sought out, and eventually found, their entire life. An exploration of hybrid butterfly fish provides a backdrop for Imbler to tackle questions about their mixed-race identity.

Imbler pushes the reader to reconsider the callous exploitation of Lorena Bobbit, whose private life and actions have been unjustly ridiculed by the world and continue to be immortalized by bestowing the name “Bobbitt” on a voracious sea worm which could just as easily, and less cruelly, be dubbed a “sand striker”. Similarly, Imbler points out that humans’ impulse to imagine the blackness of the deep sea as “oppressive” and the high pressure as “crushing” reveals our prejudices – the yeti crab has no eyes and is perfectly suited to live in that environment; it is the crab’s ideal habitat, no matter how inhospitable we humans judge it.

Imbler compels the reader to contemplate human experiences alongside the experiences of these select sea creatures to emphasize both the uniqueness and the universality of each living being’s existence as they struggle to survive, find community, and define their identities. Salps – gelatinous blobs, which form slow-moving colonies often considered a nuisance when they clog nets and water intake pipes – can teach us a vital lesson: “Slow and steady, say the salps. It doesn’t matter how fast we go, only that we all get there in the end. We may all move at different paces, but we will only reach the horizon together.”

Sabrina Imbler will talk about her book  with fellow science author Ed Yong in a virtual-only conversation on Wed., January 11, 2023 at 6pm (PT) sponsored by Elliott Bay Book Company. The event is free, but go to elliottbaybook.com to reserve your ticket.