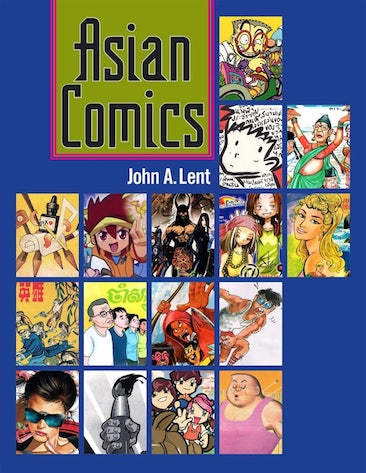 John A. Lent’s Asian Comics, the first book-length overview of cartooning in Asia, appears indispensable for those who already study Asian comics. It also provides a clear introduction to the subject for others who might take a scholarly interest in these publications. Lent surveys comic books and comics magazines, graphic novels, newspaper comic strips, magazine gag panels, and more, in sixteen Asian nations.

Thanks in part to Lent’s work as the editor/publisher of The International Journal of Comic Art, which he founded in 1999, a wide network of scholars specifically devoted to the study of comics has popped into existence, but so far comics scholars have focused primarily on comics of the United States, Europe and Japan. With this book, Lent fills in some of the territory that has been missing on the comics scholars’ map of the world. Leaving aside the frequently told story of Japanese manga, he includes instead entire chapters on cartooning in China, Hong Kong, Korea, and Taiwan in East Asia; Cambodia, Indonesia, Malaysia, Myanmar, The Philippines, Singapore, Thailand, and Vietnam in Southeast Asia; and Bangladesh, India, Nepal, and Sri Lanka in South Asia. Each chapter is thickly footnoted and comes with its own lengthy list of Works Cited.

Asian Comics is based on about 400 interviews with Asian comics editors, cartoonists, publishers, comics rental store operators, critics, scholars, officials, and others that the author conducted during about 60 of his self-financed trips to Asia between 1986 and 2012. He visited publishing houses, studios, comics libraries, academic libraries and museums, and examined rare primary documents including sketchbooks, scrapbooks, personal collections and archives. He examines national histories of comics as stories of an evolving art, but especially as stories of an unstable industry.

Fortunately, Lent proves to be not only a supremely knowledgeable guide to Asian comics, but also a smooth and organized writer, for those readers willing to slow … way … down … to absorb this densely packed text. Asian Comics supplies a catalog of important names, places, dates, titles, and press runs that is available no place else. His explanations of the ups and downs of each nation’s comics industry bring in factors including technology, politics, business, foreign influences and others.

The author concludes each chapter with a frank, informed, and sometimes downbeat summary of the current situation of comics in that nation. Recurring challenges include declining readership, competition from television and digital media, and competition from cheap imported comics (often in pirated editions.) In some times and places, government support has boosted comics as an important cultural industry, but in some times and places censorship of cartoons and harassment of cartoonists have also been issues. The book’s information about the struggles of Malaysian political cartoonist Zunar (who has been in the news recently because he is facing 43 years of prison if found guilty on nine counts of sedition) is footnoted to a 1993 interview with the author and the Lent’s correspondence with Zunar from 2009 to 2014.)

Asian Comics’ introductory survey chapter, “A Lead-Up to Asian Comics: Early Asian Visual Humor and Narrative” covers thousands of years of history. This chapter’s overview of “caricature, satire/parody, humor/playfulness, and [graphic] narrative/sequence” cites 124 sources. Lent names the most important humor artists, and describes their influences, themes, working conditions, and formats. In several examples, he shows how to decode concealed meanings that the artists were unable (for political reasons) to safely express directly.

In 1877, James Parton had said of Chinese caricatures that because of Chinese people’s “crude and primitive taste in such things, their efforts are seldom interesting to any but themselves.” Clearly, the people who would be most interested in reading the cartoons and comics mentioned and illustrated in this book would be those who understand the pertinent language and the conditions which these comics responded to. Although cartooning has made a lot of progress since 1877, the crudeness and primitiveness of many cartoon drawings continues to be part of their vitality and appeal, wherever comics are sold. Nevertheless, in many countries Asia Lent observes that some highly skilled cartoonists have made their marks. (He mentions such personal favorites of mine as Zhang Leping, Lat, Tsai Chih-chung, Nestor Redondo and Winnie Hettigoda.) Lent reports that Asian cartoonists have been struggling to maintain or raise their professional standards and their professional standing.

The book remains alert to the situations of Asian women cartoonists. These include Lee Wai-chun of Hong Kong, whose character Miss 13-Dot stood for feminine equality. Miss 13-Dot wore 1,728 different articles of clothing in the first 28 issues of her comic book, and inspired some of her readers to show copies of the comic to their tailors to explain what they wanted. Women cartoonists in Nepal told the author that “A woman has to get married in our society and she has to make a crucial decision. It’s either your work or your family. It’s up to you to decide which.”

Lent’s involvement with Asian Comics has been so longstanding and wide-ranging, that it seems that any scholarly reviewer knowledgeable about some aspect of this story must already in some way or another be in his debt. At least I am. Lent’s chapter on Sri Lankan comics repeatedly cites a piece I wrote that originally appeared in an anthology he edited, Popular Art in Asia. (He also cites my work on Malaysian comics.) Appropriately, most of the scholars and experts that Lent cites are from the nations that he discusses.

The book includes 178 illustrations, printed in black and white, pretty evenly divided among the chapters. These include many examples of the comics (sometimes to illustrate unusual formats or genres), and also photographs of cartoonists and a few photos showing how comics are displayed for sale.

The natural home for this volume would be in a university or college library’s reference collection. It would be a happy acquisition.