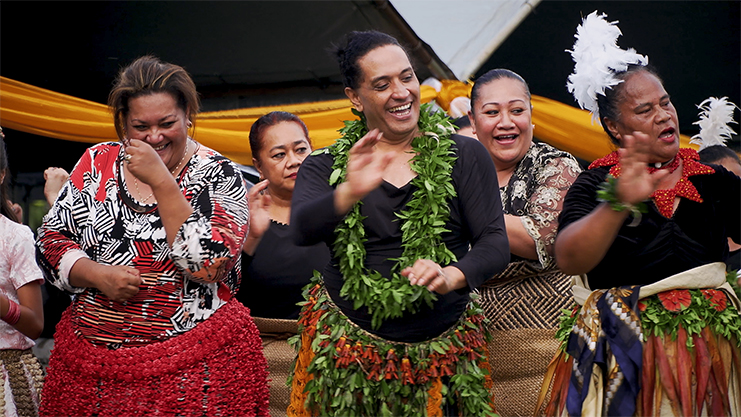 “What is my purpose in life? Why was I made like this? Why can’t I be like the person everybody wants me to be?” -Joey Jollen Siosia Winston Churchill Mataele

This internal inquisition is a dialogue that every person must grapple with. Such existential pondering is what makes us human. In the island of Tonga, isolated in the middle of the South Pacific, the trans community is forced to contemplate the last question. The documentary film Leiti’s in Waiting follows their struggle in answering these age-old questions within a society that frowns upon their lives.

Capturing the journey of transgender women, or “Leiti”, within Tonga is the M.O. for this film. The film follows the work of Tonga’s most famous/infamous (depending on your viewpoint) Leiti: Joey Mataele. She is seen as a trailblazer within the Leiti community as she was one of the first to be open with her gender expression.

Mataele is outspoken in her advocacy for equality as we see her leading the community through her work with the Tongan Leiti’s Association (TLA) and the Miss Galaxy Pageant. We tag as she advocates for trans equality, and we get an intimate look at some of the lives of other open leitis. The film does a good job of showing the audience their hardships with gripping stories of their estrangement from families and the abuse they endured.

This film is genuine and incredibly optimistic. One of the most intriguing parts of Mataele’s approach is that she does not want the leiti’s to lose their faith in the culture. She is still affiliated with her Catholic faith, ironic, as it is the very influence that helped to plant this modern bigotry. She believes that the leiti’s can be true to themselves in their gender expression and not have to sacrifice their Tongan culture.

Her style of advocacy is culturally Tongan, as she believes the solution to the trans rights issue in Tonga should be a Tongan one. Mataele remarks at a conference for the United Nations, “We do not believe in rallies. Making loud noises. We actually sit down, we go to the priest or the president of the church of Tonga and sit down and actually talk to them.” The sit-down between both sides was shown and it was it was portrayed as an emotional yet respectful dialogue between outspoken evangelicals and with Mataele, her allies and the TLA.

Tonga appropriated Christianity with ease and the religion has an enormous influence on society. The film makes the argument that Christianity, and particularly American style of evangelism, are what excluded leiti’s in mainstream Tongan society. For example, homosexuality is still a punishable crime in Tonga. This is true in other cultures where the fluidity of genders was less binary before the influence of Christian thought; however the film does not show any evidence of pre-western attitudes on the role of leitis in the strict hierarchical Tongan social system. It is merely glanced over; there is no historical or anthropological backing on the original role of leiti’s in the film.

What is presented in the film is that the TLA do the “dirty work” at events for the Royal Family and other gatherings, but it is not clear if that is something that is done by their own prerogative or if it is demanded by tradition. The Royal patrons for the TLA grew up with Mataele. One of the political allies for the transgender community, Lord Fusitu’a, remarked that the Royal Family has always been “very accepting, very compassionate, very supporting [of the leitis] because they’ve been an integral part of every family.” Do the leiti’s have a cultural function similar to eunuchs in other societies? It is not explicitly stated in the film, and it is unsure on how ‘integral’ the leiti’s have been.

All in all, Leiti’s in Waiting is an informative as well as an empathetic documentary that shows the struggle for transgender rights in contemporary Tonga through the ideals and vision of Joey Mataele. It does a wonderful job of letting the audience temporarily suspend their bias if they have any and see the difficulties and injustices of leitis.