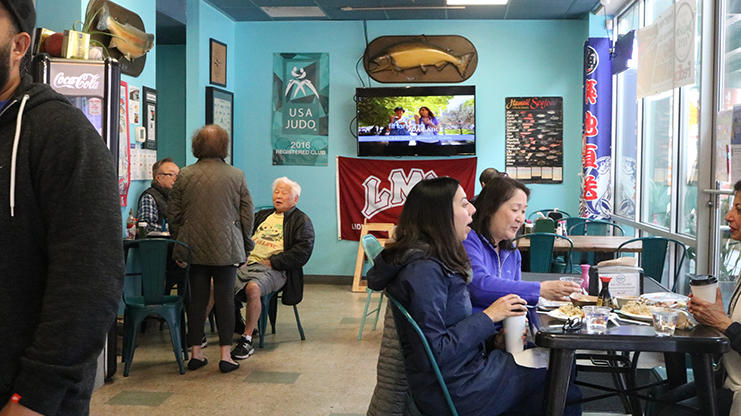 It’s 10:01 AM on a Sunday, and Salvador “Sal” Panelo already has customers. It’s a young couple with a small white suitcase and identification tags dangling off the handle. Seattle Fish Guys has only been open for a minute.

“Last stop before the plane,” the woman says as she packs two containers of poké into her bag.

In about 15 minutes, Seattle Fish Guys will be full of people ordering seafood, asking about today’s freshest catch, and watching Tiger Woods win the Masters on the big flat-screen TV in the back of the shop.

Panelo wouldn’t have it any other way.

A third generation Seattle fishmonger, his grandparents Lincoln and Teru Beppu founded Linc’s Tackle and Honda Shop in the International District. A small fishing equipment shop that became a Seattle staple until it shut down in 2017, the store and Panelo’s family have been involved in the Puget Sound fishing scene for decades.

But it wasn’t the knowledge or the experience of the Beppus that made Linc’s shop special. People flocked to the store for the community that was fostered there. According to Panelo, it was a gathering place where everyone knew each other, turning the shop into a Seattle landmark.

Now, three years after it opened, Panelo’s own fish counter has inherited some of the same tradition and aura that made Linc’s special.

“It just feels like home here,” customer Jackie de la Cruz said. “It’s like being in a community. It’s a comfortable feeling to come here.”

Located in the Central District less than a mile away from where his grandfather’s shop was, customers come to Fish Guys to enjoy that same sense familiarity and family that Panelo remembers.

Growing up in Beacon Hill, Panelo spent much of his youth at his grandfather’s tackle shop, listening to stories from the colorful cast of characters that paraded through Linc’s store on a daily basis. In the tackle shop, he heard fisherman complain about the result of last night’s Mariners’ game, learned to hook worms properly, and watched his father and uncles fix Honda motorcycles. The Beppus sold everything from reels to hotrods.

While his love for cooking may have originated in Linc’s kitchen, the rest of his skills still had to be developed. Panelo started working at the tackle shop when he was 14, and after finishing his associate’s degree he landed a job at Mutual Fish Company, a wholesale seafood market in North Beacon Hill. He got the job partially due to his father Jerry Beppu’s connections, and there Panelo learned to cut and clean like a true fishmonger.

Most of his business experience though, comes from his three different stints in Pike Place Market where he worked at Pike Place Fish Market throwing fish, Pure Food Fish Market, and City Fish Seafood, the latter of which he was a part-owner.

Panelo and Ian Tanaka, his manager, left City Fish in 2015, and when Fish Guys opened a year later, they convinced Panelo’s wife Desiree Chinn to quit her job in insurance to help them run the counter.

“It was challenging, you know, it was a scary thing to do,” Chinn said. “We didn’t know how it was going to be. There was just a lot of risk. Most people don’t open a lot of businesses, and it’s harder and harder for minority businesses to stay open, too.”

They looked at several different spots for their new venture, but ultimately settled on the corner of 23rd and Jackson St. in the Central District. Panelo and Tanaka were initially hesitant to open up there, worrying that they were too isolated from the rest of the International District and about the history of crime in the area.

But the trio decided to give it a try, and word spread quickly, especially amongst friends and family of Panelo. He says people who knew of his parents that he’d never met, community members who used to shop at Linc’s, and schoolmates he hadn’t seen in over 20 years all came out to support his new business.

“It’s like ‘Cheer’s,’ the ‘everyone knows your name’ kind of thing,” Chinn said. “We started out with three tables and a counter, not envisioning that people wanted to come here. It’s not downtown, it’s not South Lake Union, but people are actually coming here to eat.”

Fish Guys isn’t just restricted to old friends and family either. On any given day patrons can include Ethiopian families trying raw fish for the first time, seniors from the Keiro Nursing Home, and local Central District residents. And every person who walks through the door almost immediately calls out “Hey Sal!” to the man behind the counter.

While he considers the shop a fish counter first, Panelo estimates about 60 percent of the products he sells are pre-made or cooked seafood like poké or shrimp tempura. He hopes to make it closer to an even split as summer approaches.

And Fish Guys has able to give back to the community that supported them. They have donated clam chowder to local soup kitchens, and it sponsors the Garfield High School football team through the booster’s club.

And Linc’s cash register has a new home. The machine, which the Beppus have owned since before World War II and kept safe through their time at Minidoka Internment Camp, now sits on the floor at Seattle Fish Guys.

“I wanted to put it on top of the counter, but it didn’t really fit,” Panelo said. “It only weighs about 300 pounds and takes three guys to pick it up, but eventually we’re going to be using it.”

It’s not the only part of the tackle shop that has been physically incorporated into Fish Guys. Panelo and Tanaka are also considering selling fishing gear at the counter, and many of the decorations that created the unique atmosphere of Linc’s now hang from the teal walls next to Seahawks memorabilia.

But Fish Guys is also constantly moving forward, and Panelo and Tanaka are always experimenting with new ways to cook seafood by leaning on their customers and workers to continue learning. Dishes like cioppino, crab cakes, and oyster shooters can now be found next to idako, saba shioyaki and hamachi-kama.

No matter what direction Fish Guys goes from here though, one thing remains certain: Panelo will continue to run the fish shop like Linc and Jerry taught him — with passion, enthusiasm, and and a love for the craft.

“I love the fish business,” he said. “I’ve been doing it for 40-plus years, and once you’re in something for this long, you’ve got to love it. I love it. I can’t think about doing anything else. This is where it’s at.”