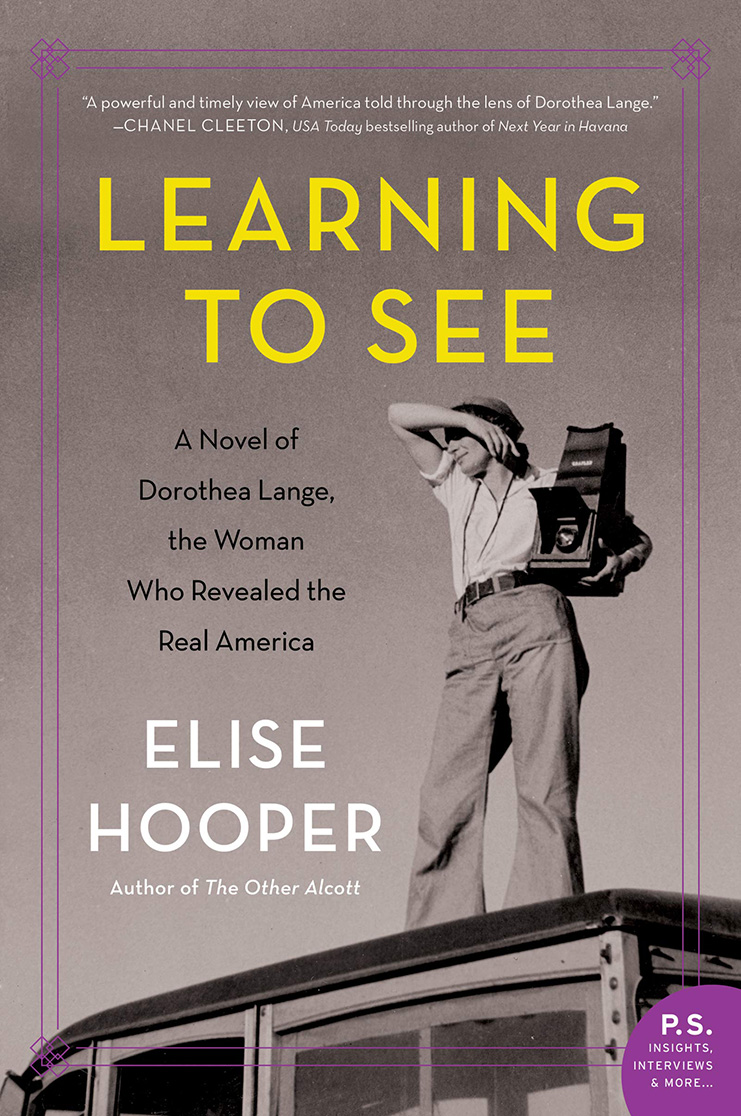 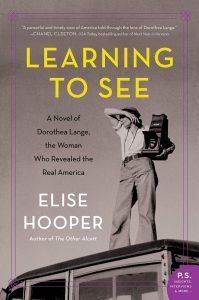 Even those who don’t know Dorothea Lange’s name know her depression-era images of Dust Bowl refugees. Our nation’s collective memory of that time is seared with her photographs, the most iconic being “Migrant Mother,” a haunting portrait of a stoic woman clutching her downtrodden children with their unseen faces buried in their mother’s embrace. The power of that single image called the nation into action, and the power of a photograph would never again be underestimated.

But there is much more to the woman behind the camera than that photograph, and the result has been a plethora of good books about Dorothea Lange and anthologies of her photographs. The question is: can two more books shed additional light on this great American artist? One is historical fiction, Learning to See, and the other is a collection of her photographs and short essays, Dorothea Lange: Politics of Seeing.

Seattle-based author, Elise Hooper, follows the success of her first novel, The Other Alcott, with another historical novel, Learning to See, and in it, she adds a credible human dimension to an American Icon.

It is a daunting, if not presumptuous, task to tell Dorothea Lange’s story as a faux autobiography, especially with its intent to reveal how Lange’s creative vision evolved. Adding to this burden is the complexity of Lange’s personal life and enigmatic personality. For instance, her fervent drive for social justice and artistic respect came at the expense of taking care of her children, and her first marriage and its matter-of-fact ending in double divorces when she married Paul Taylor are equally difficult to understand from the outside.

Yet perhaps, it is that complexity and Lange’s grand stature of genius that makes her such an attractive subject. Hooper has done her biographical homework, and armed with impressive writing skills, she accomplishes to convince that the voice she writes is true to the woman behind all those photographs.

Elise Hooper is a fine storyteller and her dialog rings of authenticity and of period appropriateness.  Lange’s speech and inner thoughts weave seamlessly, as does everything on the page.  Her flair in capturing incidental details – the shades color in a room, the texture of a surface, or a gesture of a hand –  never distract, and always add a reality in capturing a moment in time. And she writes all this with an economy of words and vocabulary, opening the book to younger readers, while never alienating them or adult readers.

Certainly, purists may quibble with a detail here and there, or with historical fiction itself, but the book is best enjoyed by just settling in, as one does in a darkened movie theater when watching a similar kind of fiction on the big screen. In doing so, the pages turn effortlessly and the illusion is made complete.

Dorothea Lange: Politics of Seeing is aptly titled, but the heavy lifting is carried, perhaps wisely, by Lange’s photographs themselves. However, this handsome folio is much more than just glorious images.  The Oakland Museum of California has brought forth this book as a mission to not only preserve the images and their impact, but also to keep alive her political legacy of social photojournalism.

The resulting book has an uncanny newness, even though many of images are already well known and date back from as far as 1919 and none more recent than 1965. One reason is the quality of the images and their reproduction – rarely, if ever, have they looked so good in print. The editors have taken the freedom to make modern prints of Lange’s photos, because definitive exemplars rarely exist. Lange released various versions of her images with different croppings and parameters, and sometimes, she did not make her own prints.  Some may argue with the choice of slightly warm tones and matt finish of this book’s images, but none can deny the clean look and subtle tonality in them.

The book’s anchoring essay, “Dorothea Lange and the Politics of Seeing,” from which the book’s title is taken, is short in length but robust in meaning.  Author Drew Heath Johnson provides enough for those unfamiliar with Lange, as well as enough thought-provoking heft for those who are.

David Campany’s essay “The Migrant Mother” reveals much about the circumstances and history of Lange’s most famous photograph. How the photograph was taken and how it became what it became is almost as astounding as the photograph that we only thought we knew.

The final essay, “Reflections on an Archive,” effectively argues that Lange’s photographs go far beyond “Migrant Mother” and that her oeuvre has about as much meaning for us today as it did for their contemporaries.

Photographs are organized by various socio-political causes and projects Lange championed in chronological order, and reinforce the book’s thesis. Each chapter of images has a far from typical preface, which provokes thought and enhances the viewing.

Notable are Lange’s photographs of the Japanese American Internment in the collection. Hired by the government agency to forcibly remove Japanese American from their homes, Dorothea Lange was personally outraged by the injustice, but worked as long as she could on the inside as something of a subversive. For years, these photographs were hidden from the public’s view. The images culled in Politics of Seeing are as beautiful as they are powerfully disturbing, and one wishes to see more.

In a way, Dorothea Lange’s photographs of the suffering of Japanese Americans during WWII are even more important than her depression-era ones. Like “Migrant Mother,” the internment photographs evoke immense suffering and injustice, especially for those today who did not live it. Without her images of the Japanese American Internment, the visual record would be sparse and a ghost of what it is with them.

Both these books demonstrate that a powerful woman’s voice in the face injustice should never be underestimated, especially in the political and global climate that we find ourselves in today. Dorothea Lange’s compassion and artistry live on, thanks partly to books like these.