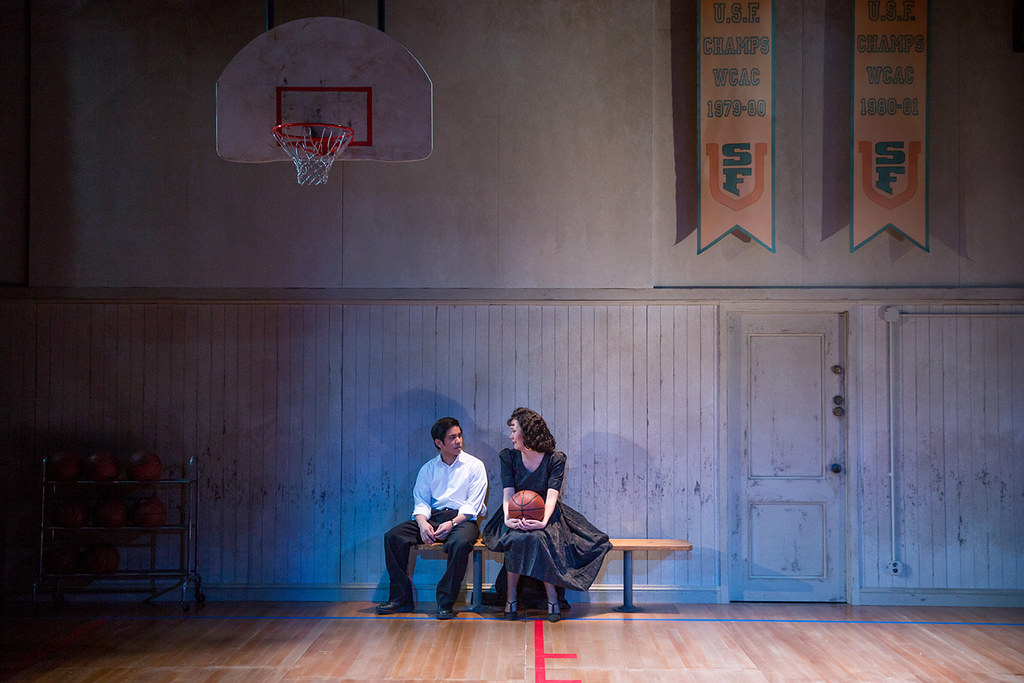 It’s March Madness time, and basketball fans are in thrall watching how the college playoff games turn out. That makes the Seattle Repertory Theatre’s presentation of The Great Leap by playwright Lauren Yee particularly timely. Two players from very different cultures navigate both the basketball court and their different experiences of Chinese heritage.

Yee explores this sport as a way to delve into both her father’s history, as well as the complex relationship between China and the United States. “I got to apprentice myself to this whole new world,” Yee said.

While writing this play, Yee found that basketball had deeper roots in China than most Americans realize. “China has had basketball almost as long as America has had it,” she said. “It’s the most popular sport in China, the only western sport never previously banned by the Chinese government.”
Directed by Eric Ting and produced in association with the Denver Center for the Performing Arts, this show is now coming to the Pacific Northwest. “Most of the work got done in Denver, so I’m just happy to come and see the fruits of our work!” Yee said. “And enjoy my time in Seattle.”

But she’s not just coming to town to have fun. “I have never seen a city hungrier for new work than Seattle,” she said. “The joy that Seattle audiences harbor for new work is incredibly motivating. They will show up for readings with an inquisitiveness that you don’t always see in other cities.”

Yee also finds Seattle an inspiring place for developing new material. “It’s also an inspiring place to think about story,” she said. “There’s so much unexpected and unexplored history in Seattle. And every time I come to Seattle, I’m floored by the layers I continue to unearth.”

That gradual exploration works well with Yee’s creative process. “I start writing even before I know what I’m writing about. I can sketch out the pieces of the plays, such as the setting, the characters, the language, fairly quickly,” she said. “Most of the writing process, or rewriting process, is me figuring out how these pieces best fit together.”

Yee reports that she generally trusts her process. “My intuitions are rarely wrong, but it usually takes me a very long time to figure out why these particular characters are in these particular situations,” she said. “In fact, in The Great Leap, I didn’t figure out one of the key plot points until very late in the writing.”

She finds that the stereotypical lifestyle of the solitary writer doesn’t suit her well. “I’m also incredibly motivated by collaboration with others,” she said. “One of my favorite things to do is enter a weeklong workshop with the goal of mapping out a brand new play or pushing a half-finished piece of writing forward.”

The key is the creative input of other theatre artists. “I have a great respect for actors and directors,” she said, “and so the thought of having them waiting for me to complete a scene makes me churn out work so much faster than I could by myself.”

This same collaborative spirit is infusing Yee’s next project, called Cambodian Rock Band, which she says is about the survival of Cambodia’s musical past. “I’ve been more or less obsessed with the Cambodian music scene and the history around the Khmer Rouge years since the first time I heard Dengue Fever play and have been gradually absorbing information on the history since then,” she said. “Shortly after seeing the band play for the first time, I visited Cambodia, which is still recovering from the scars of the Khmer Rouge genocide.”

Yee is following her usual process of discovery in developing this new work. “I didn’t know it would be a play with music and a live band. That discovery came organically,” she said. “I first thought the play would be about music and so maybe we’d play a couple Dengue Fever songs over the sound system during transitions or intermission.”

But other artists pointed toward another direction. “While work-shopping the play at Berkeley Repertory’s Ground Floor, I happened to cast actors who were already incredible musicians,” she said. “They brought in instruments and the whole play opened up, and I realized how much the act of playing music live was crucial to the play.”

This interweaving of multiple artistic disciplines led to discoveries about the essential human spirit. “It’s about radical acts of defiance and it’s why music and art is critical to sustaining us as human beings,” Yee said. “And having that live music makes that message so much clearer.”

Whether it’s Cambodian history or Chinese-American cultural relations, or other topics yet to be explored, Yee plans to keep exploring. “How do you do the same thing over and over in new and surprising ways?” she asks. “I’m still always searching for the answer.”