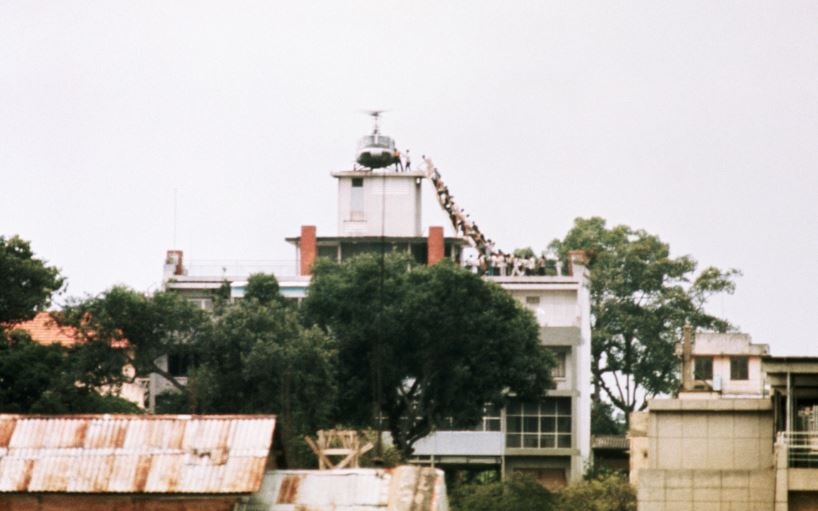 The one element that seems to be missing from Rory Kennedy’s documentary, Last Days in Vietnam, is the human aspect. That’s ironic considering her narrative is focused on the humanitarian efforts of evacuating Saigon as it fell to the Viet Cong. Yet, of the thousands of Vietnamese that were frantically rescued by Americans, the viewer is allowed acquaintanceship with just one civilian. That young man, who was only six when his helicopter pilot father saved their family, marvels as he shares his personal story of that fateful day in 1975.

Otherwise, all the others featured are American and Vietnamese military officials, media correspondents, intelligence community affiliates, defense contractors, and politicians like Henry Kissinger. Although these talking heads provide the historical heft of the film, they leave the audience yearning for something more intimate. Still, Last Days is moving in its presentation, even if its emotional impact is felt in scenes where masses are urged onto waiting helicopters and not in any single individual story.

Perhaps the most televised war in history, the Vietnam conflict divided the United States between “doves” and “hawks.” While peaceniks felt Americans had no business being involved in another country’s civil war, others were adamant that Vietnam not surrender to a communist agenda that would empower an already intimidating China with another ally.

As young American men fled to Canada to avoid military service or else burned their draft cards, media coverage revealed the fighting in brutal, close-up details every night on network news. Between witnessing bloodied American soldiers and Vietnamese children burned by napalm, Americans soon grew skeptical of winning the war and marched in protest against U.S. involvement.

With the 1973 Paris Peace Accords, America agreed to eventually leave, but stipulated that Vietnam remain divided between North and South. However, with the resignation of President Nixon (whom the Viet Cong considered insane enough to attack should they breech the agreement), the North became emboldened. Confident that his successor, Gerald Ford, was weak, they revved up their offense and began a campaign to control all of Vietnam.

As it became increasingly clear that Americans must leave, the White House offered no contingency plan for their South Vietnamese counterparts who had worked alongside them. Although it meant certain imprisonment or death at the hands of the Viet Cong, Congress rebuffed the Vietnamese by not allocating a budget to evacuate them. The sense of betrayal felt by those eventually left behind is clearly captured in the vivid footage of angry looters carting away office furniture from the U.S. Embassy. Some of the film’s interviewees also blame the delayed evacuation on U.S. Ambassador Graham Martin who refused to believe the North could win. In his defense, he indicates his tardiness had more to do with preventing panic than the personal grudge he held against the Viet Cong.

Not only had American taxpayers’ money been wasted on a war that couldn’t be won, but in one scene it’s revealed that the military was ordered to burn substantial amounts of U.S. dollars rather than leave any behind. Mounds of classified papers were also destroyed to protect Vietnamese agents—labor that took away from evacuation efforts.

The daughter of Senator Robert F. Kennedy, Rory Kennedy utilizes dramatic stills, vital news footage, and enhanced 3D graphics to create an easy to follow timeline of a single aspect of a complicated war. Although she moves among various speakers, her focus remains firmly on events that transpired April 30, 1975 when, against White House orders, Americans moved thousands of South Vietnamese out of Saigon via helicopters, trucks, and boats. For 18 hours straight, drivers and pilots worked relentlessly. With desperation distorting their faces, hundreds of Vietnamese scaled fences to enter the U.S. embassy where helicopters lifted off from the rooftop. Thanks to heavy coverage of the war by the networks, Kennedy had loads of material at her disposal and her skill in turning a 24-hour event into a film that runs slightly over 1.5 hours is commendable.

Stunning footage like 40 evacuees being crammed into one helicopter or South Vietnamese soldiers stripping off their uniforms and leaving their boots in the streets are heartrending. But despite the pathos of Kennedy’s participants, a more sentimental effect might have been achieved had she also spotlighted some who got left behind during those last turbulent days in Vietnam.

Last Days in Vietnam opens October 3 at Landmark Theatre’s Varsity Theatre. Miki Nguyen, whose father flew a helicopter and transported three families out of South Vietnam to a U.S. aircraft carrier, will appear in person on Saturday and Sunday, October 4 and 5. For more information, click here.