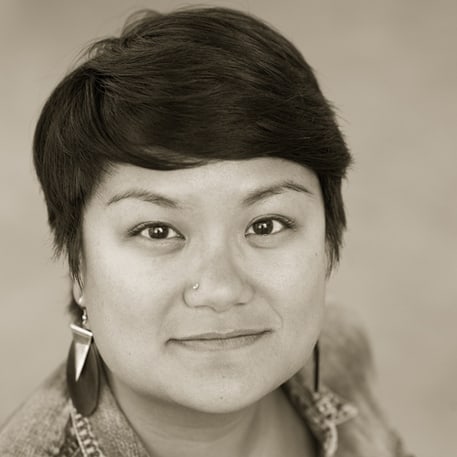 Michelle Peñaloza grew up in Nashville, Tennessee. A graduate of Vanderbilt University and the University of Oregon, she is the author of two chapbooks: landscape/heartbreak (Two Sylvias Press) and Last Night I Dreamt of Volcanoes (Organic Weapon Arts), which will be released next week at the AWP Conference in Minneapolis.

For March and April, she is the poetry editor for the James Franco Review. She lives in Seattle, where she is a sometimes instructor at the Richard Hugo House and Seattle University as well as as the Operations Administrator for The Seattle Human Services Coalition.

I caught up with Michelle recently after her reading at WordsWest Literary Events—a new reading series in West Seattle. Michelle and I both graduated from the University of Oregon’s MFA program, a few decades apart. In the two short years that Michelle has lived in Seattle she has become part of the vibrant literary scene. What seems especially intriguing is that Michelle created her own project which became a kind of calling card as she became involved in everything from Hugo House to the James Franco Review.

Susan Rich: What are your two favorite chapbooks, since this is a genre that you’re currently exploring?

Michelle Peñaloza: I have three! Jane Wong’s Kudzu Does Not Stop, Jonterri Gadson’s Pepper Girl, and Keith Leonard’s Still, The Shore. Each of these chapbooks punches me in the gut even as they are stylistically very, very different.

Rich: What is your chapbook, landscape/heartbreak about?

Peñaloza: Lofty answer: the way narrative infuses landscape, the way landscape enters and marks our narratives. Bare-bones answer: poems written in response to walking conversations with people who took me to places where they’d had their hearts broken in Seattle.

Rich: I understand that you came up with your idea for this book before you moved to Seattle—how did the concept come to you?

Peñaloza: In the summer of 2012, I lived in Oregon. Post-graduate school, I’d stayed in town to adjunct at the university. I was mired in a toxic and traumatic longterm relationship. I stopped telling my mother and my closest friends about the lies I caught him in, the endless patterns of our fighting, the difficulties I had concentrating or sleeping. For a couple years, I’d been compartmentalizing these traumas; I had a brief respite that summer, however. I was away for extended periods of time at a writer’s retreat, a conference, and The Long Walk—a Seattle-based land performance, art experience—a nearly 50-mile walk from Golden Gardens to Snoqualmie Falls over four days with 50 strangers. Over the course of The Long Walk, an intimacy developed among our group—in conversation and in our collective moving experience. When we have nothing but time and the path before us, the quality of our conversation deepened. The measured answers I might have given, the self-consciousness I might have felt—I walked past that with other people. Through it.

That summer gave me back pieces of myself; it was the beginning of what gave me the strength to leave. The Long Walk, in particular, helped me rediscover a fortitude I had forgotten.

Fast forward to December 2012: I left Oregon, left that relationship, and decided to relocate to Seattle. I found a place to live, but I didn’t have a job lined up. It was on my mother’s couch, during the holidays, before moving to Seattle, that I came up with the idea that would become landscape/heartbreak.

Upon arrival in Seattle … I thought about how the act of walking had given me the strength to leave, how those walking conversations had been clarifying and heartening. My own heart, still raw, still hurting—I thought, what if I asked other people to walk with me? What if I learned the landscape of Seattle through people’s stories? What if my heart could heal in tandem with others?

Rich: Once you started writing the book, how did you work to refine it? Was it a long process?

Peñaloza: The development and execution of landscape/heartbreak happened over the course of two years. Upon arrival in Seattle, I applied for and was ultimately rejected for a grant; however, that initial setback helped me define and refine the project’s aims, and led me to create my own Indiegogo campaign, which led to the creation of more “texts” related to the project and to more people learning about and volunteering to take part. I applied for more fellowships and grants in Seattle and was fortunate enough to receive support from literary and arts organizations in Seattle. Completing each application helped me to further hone all aspects of the project and each acceptance provided legitimacy, resources, and monetary support for the landscape/heartbreak. Additionally, as people learned about the project, I was approached by The Henry Art Gallery to have the project be a part of their Summer Field Studies exhibition and by The Short Run Festival to conduct a walking tour and reading of landscape/heartbreak. The project continued to evolve and develop through opportunities such as these.

I had a sense, at the start of the project, that the poetry that would come from landscape/heartbreak would ultimately be a chapbook. I was open to the possibility of a full-length collection; however, as I continued on the walks, the necessity of a set timeframe became clear. The amount of heartbreak and the number of people who have stories to share are infinite. If I hadn’t decided to limit the walks to happen within the span of one year, I would probably still be walking with people today. I wanted to be realistic about my own capacity and energy; I didn’t want to diminish anyone’s experience or my own or my writing in response to people’s experiences due to my own exhaustion, physical or emotional. I was wary of how the project could become unwieldy, emotionally and creatively, if I took on too much.

Rich: Do you have a “favorite” poem in the book? Or rather which is your favorite poem today—and maybe why?

Peñaloza: This is hard. I have such specific attachment to each one, not only because the poems themselves are meaningful to me, but also because my intimate knowledge of someone else’s generously shared story is an intrinsic part of each poem for me. So, that said, a great anxiety of mine throughout the making of landscape/heartbreak was the task of doing justice and paying homage to the openness and vulnerability of the people who took me on walks. Not every walk inspired a entire poem. Not every attempt to write a poem was successful enough to do justice to a story someone had shared with me. There is a whole pile of attempted stop-starts that did not make the cut, which could make up another chapbook (that should never see the light of day). Yet, I still wanted to acknowledge every walk as a part of the project, as integral to the whole even as some appeared as entire poems, in parts of poems, or only in “Field Notes.” This final poem, which I aimed to also correspond with the final map in its form, is comprised of small pieces—vignettes, details and snippets— in arranged in the chronological order of each walk. I conceived of these smaller pieces as “inside poems” shared between me and the people with whom I walked. These small moments may read as more esoteric than the rest of the collection, but my hope they resonate for every reader, and, I believe, taken as a whole will reiterate the culmination of story and transformation of place in landscape/heartbreak.

Rich: What poems are you working on now? Is there a theme emerging?

Peñaloza: I’m slowly writing these days—landscape/heartbreak took a lot out of me and I have another chapbook coming out very soon from Organic Weapon Arts Press, entitled Last Night I Dreamt of Volcanoes. But, the poems I have written recently have been love poems (“no heartbreak, but heartrepair!”) and also poems interrogating desire—its impetus and complications and the projections we place upon each other in its name.