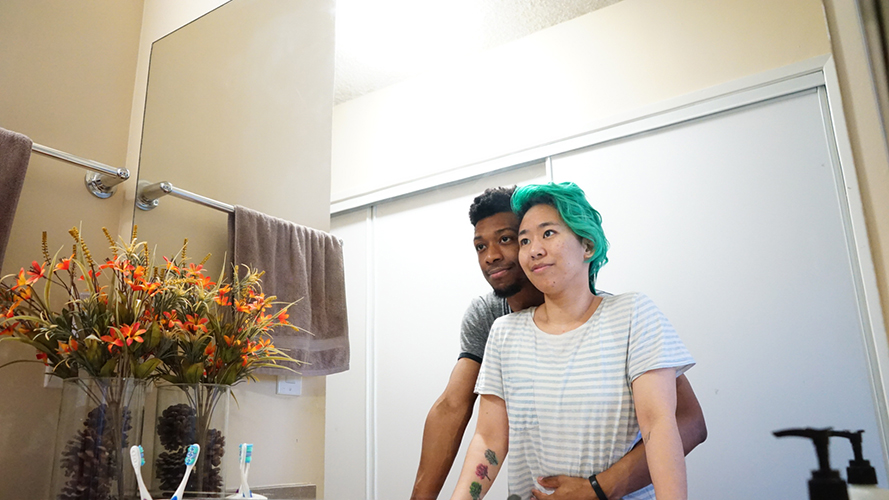 By now, most people have heard – or at least heard of – TED Talks. More recently, this Technology, Entertainment and Design (TED) nonprofit foundation launched The Mystery Experiment, which granted $10,000 to 300 inspired participants, and in February, local KUOW community engagement producer Kristin Leong was awarded one of these grants.

The funding was a big surprise to Leong. “When TED shared their call for people to apply to be part of their Mystery Experiment, they were very vague about what the project was all about or what it would require of participants,” Leong said. “There was no mention of money at all.”

But that didn’t stop Leong from applying. “I replied to their mysterious call because I’ve had such a supportive and inspiring experience over the last four years as a TED-Ed Innovative Educator, and because I believe in TED’s mission to amplify innovative and audacious ideas,” she said. “I had no idea what I was getting myself into!”

With that funding, Leong created #AZNxBLM, which would draw together Black and Asian American artists and writers to create solidarity between the Asian American community and the Black Lives Matter movement. “We were one year into surging anti-Asian hate crimes around the world,” Leong said, “and one week ahead of the Atlanta spa shooting in March that left six Asian women murdered.”

In her call for artists, Leong offered each #AZNxBLM artist a stipend of $400 and the opportunity to collaborate with other artists engaged in building social bonds. “I knew from the start that I wanted to use a significant part of this money to give back to the community, and support values I believe in,” Leong said. “Amplifying underrepresented voices is at the heart of all of my work, and I knew that a creative community can always accomplish more than any individual.”

Leong also partnered with the Slants Foundation to host and share the work created by the #AZNxBLM artists. “I was previously awarded a 2020 Countering Hate Award from The Slants Foundation, so I knew firsthand that the organization is living its mission to provide direct support to artists and amplify creative work rooted in social justice values,” she said. “They were the first people I thought of when I was imagining a partner for #AZNxBLM.”

The Slants Foundation offered to match the artist stipends and provided crucial logistical support. “I’ve been working closely with the artists and writers in their project development and designing how we’re sharing the project,” Leong elaborated, “and The Slants Foundation has been invaluable on much of the backend, like creating the artist contracts, securing music rights, publishing the projects on YouTube, and making sure all of our artists get paid.”

Most rewarding for Leong is the courage of the artists, who were willing to tackle the complexities of two historically marginalized groups working together. “A few examples include Joe Kye and Austin Antoine’s I See In Color conversation where they talk about where their experiences diverge and overlap as Asian and Black men in America,” Leong described, “and Maylin Tu’s essay on Steph Cha’s book [Your House Will Pay] based on the 1991 killing of Latasha Harlins. Harlins, who was Black, was just 15 years old when she was shot by Korean store owner Soon Ja Du.”

The artists of #AZNxBLM were eager to practice that courage. “It’s been a brutal year of racial violence and I’d been wanting to write something that could respond to anti-Asian hate crimes against Asian American women,” said poet Shin Yu Pai. “The added criteria of making connections and alliances with BLM resonated for me, and I approached Ibrahim Arsalan, an artist who I’ve worked with before on other projects to see if he might want to collaborate.”

Arsalan agreed, and together they strove to find places of alliance. she and her and he and him and they and them and I and we is a performance in story and song that remembers the stories of Feng Daoyu, George Floyd and other victims of recent racial hate crimes,” Pai said. “Our piece interrogates the personal impact of racism and violence upon the lived experience of people of color (and their families), across a range of generations and backgrounds to reflect on choices that are made in the interest of keeping oneself alive.”
Unlike the solitary act of writing poetry, collaborating and performing demanded more active learning from Pai. “Ibrahim suggested to me that the thing that Asians may have to learn from Black people is the ability to boldly claim and assert their story,” she said. “Through my creative exchange with Ibrahim, I got a little bolder, a little louder.”

Speaking up was a theme that resonated with other #AZNxBLM artists, including Old Chingu, a Korean American musician, who contributed a song called AZN LUV. “You see different shots of people in the city and artists that are proud to be who they are,” he said. “I hope this song will impact not just our Asian American and Black community, but those who want to be true allies to our people and fight for change.”

Singer-songwriter Sheeba Marie also offered her voice in her song and video Still Together, which focuses on grieving and healing together, rather than alone. “I reflected on the many different communities throughout my life and the people who have taught me about justice, friendship, family, artistry and strength,” she said. “The music video completely evolved from just showing words to becoming a symbolic vigil.”

Other artists, such as Iris Kim and Pauline Scully, made themselves heard through film.

“My project is a feature of the co-founders of Cinema Latte productions, an Asian American and Black women-led production company,” Kim said. “The founders, Kelly Chen and Lorraine Wheat, started the studio following last year’s BLM protests to tell human-driven dramas and romances that unite People of Color.”

Kim believes that companies such as Cinema Latte are vital to our current cultural conversations. “Film and TV shapes so much of how we process the world around us,” she said. “I was so struck by the genuine passion and excitement that Kelly and Lorraine had for their artistic vision to build Black and Asian solidarity through film.”

Scully shares that passion and courage in putting herself on camera in her film Projection, which highlights her own journey of dismantling internalized racism and unlearning anti-Blackness as a Filipino American woman. “I was still nervous and scared about doing it,” she said. “But we must unpack everything, we must go through the muck, we must dismantle our false beliefs and truths in order to heal and grow with each other.”

Despite all of the work created and shared, Leong doesn’t see this project as final. “My hope that this first round of 14 #AZNxBLM projects for 2021’s Asian American Pacific Islander Heritage Month is just one part of the start of a much larger conversation about Asian and Black solidarity,” she said. “My hope is also that this project ends up supporting not just the #StopAAPIHate and #BlackLivesMatter movements, but also that it serves as an invitation and entry point into active allyship for people who are not part of our API or Black communities.”

Ultimately, Leong wants people to talk and to find commonalities. “I believe in the power of art to bring people together around hard conversations,” she said. “I also believe that those hard conversations are the first step to taking action.”