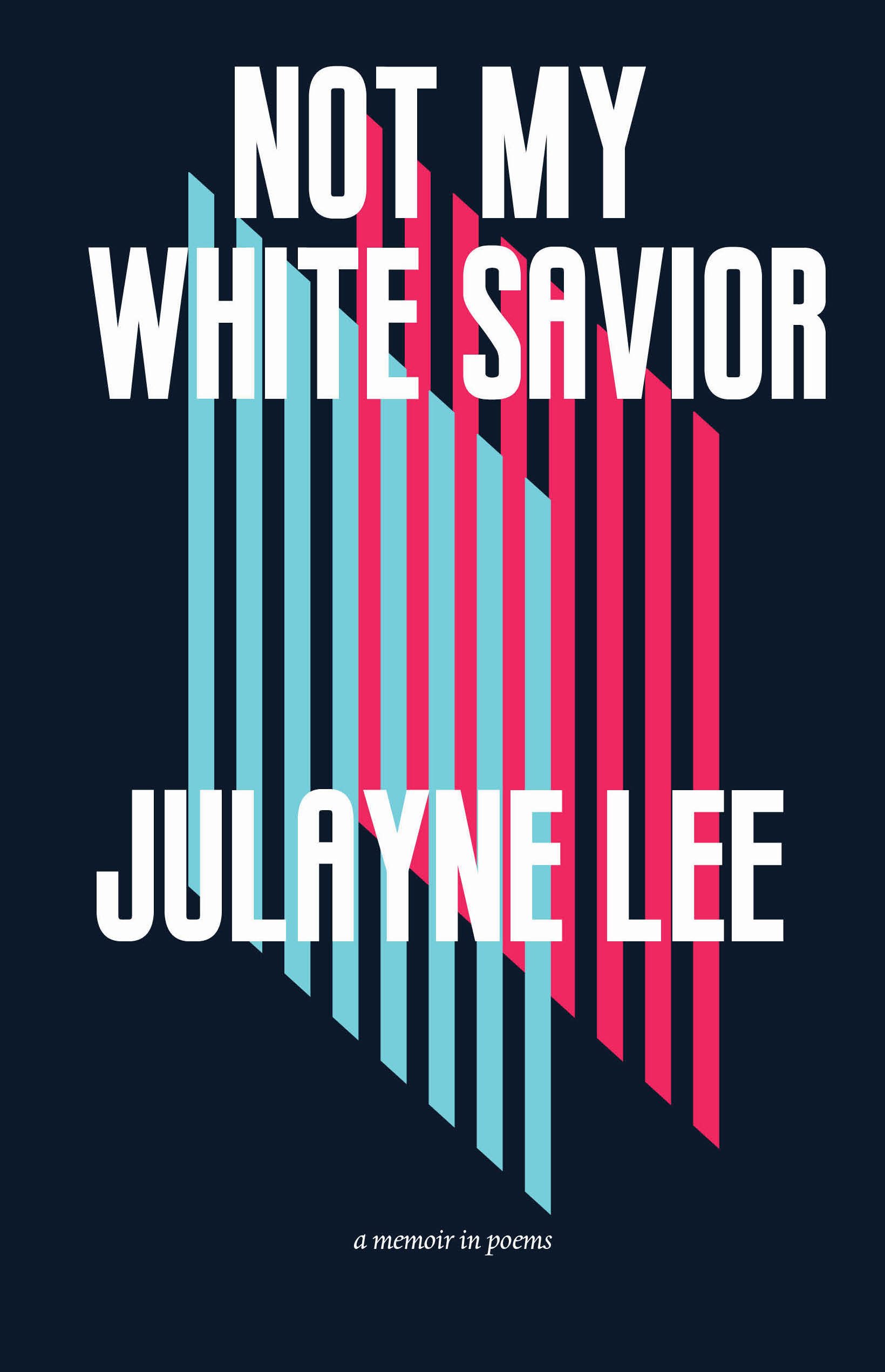 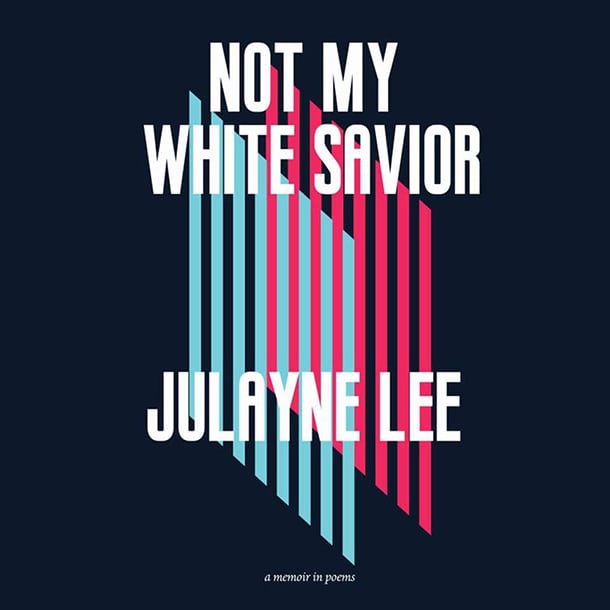 Not My White Savior, by Julayne Lee, Rare Birds Books, 2018

Presenting her memoir in poems, Julayne Lee looks critically at the conditions which inspired her adoption – the Korean War, the perception that the Korean orphans would come to a better life in the U.S., and the difficulty of cobbling together an understanding of her heritage while growing up in the Midwest. These poems are very accessible and plainly written – she notes that she wasn’t originally intending to publish, but that others had found healing in hearing the painful issues addressed.

Be prepared for blunt speech and raw rage as point by painful point, Lee takes us on the journey to find her personal history and owned identity.  She is very clear about the forces, societal and parental, that oppose her ethnic exploration, clearly depicting how her adopted parents fought to contain her within their Christian, sexist and smug sense of the better American life. Even her body is colonialized, and she notes in “Eyes Wide Open” that her adopted white grandmother asks, “how I can see out of these slits” for eyes, where eyes wide open means rounder, better-looking.

There are fierce, painful moments all over this book of poems, but there are a few that stand out for their nuanced  insight: “Jealousy”, where the speaker notes she has been groomed into something her mother is jealous of; “Are You My Mother?” which traces the reactions of older women the speaker meets upon a return trip to South Korea, and the “Psalm for White Saviors” which closes with the lines: “Surely I can’t pass as white eternally/for my olive flesh, almond-shaped eyes/shall follow me all the days of my life/ And I will dwell in my yellow body/ With my white name forever.”

One Daughter is Worth Ten Sons, by Jiwon Choi, Hanging Loose Press, 2017

In One Daughter is Worth Ten Sons, Jiwon Choi takes us on a different exploration of Korea and Korean-American culture. Here, with literary phrasing sharp as needles, she takes us through life in New York City area as a Korean-American. Her poems are bursting with Korean proverbs, city modes of transport, and symbols of love’s eventual separation: a pastrami on rye strewn under the seat of a subway car, moths without wings, cold fish pressed to warm flesh. The eye of the speaker is always moving, always exacting in describing what it finds, and always passionately involved/changed by what is seen.

In the “No Regrets” middle section, there is some harkening to Anne Sexton’s Transformations – first with a poem about Anne Sexton herself, but then mythical and literary creatures appear in conversation with the poetic speaker – a hag, a witch, a village prostitute. Jane Austen is invoked, then deftly the poems weave the author’s Dorothy Hamill bangs and nostalgia into weave. By the end of the section you are left wondering whether the characters in the speaker’s memory are fictional, or part of the nicknames of childhood and not fairytales at all.

In the final section of “Korean Grocery,” female voices have the last incisive, deadly word – the title poem “One Daughter is Worth Ten Sons” is here, as is a defiant “I find my father’s magazines” and “Day of the Dead,” when the mother gets the crabs ready for a soy sauce boil. The final section brings everything together – the memories, the folklore, the history of childhood (Rodney King once again makes an appearance). Until at last the mother has her victory over the fat, skinny and mean in the process of something delicious.

No Comet, that Serpent in the Sky Means Noise, by Sueyeun Juliette Lee, Kore Press, 2017

In No Comet, that Serpent in the Sky Means Noise, the reader will encounter a lot of white space and a huge sense of expanse. There are ten poems in this full-length book, but the book itself is shaped short in height, long in width, to accommodate the longer lines and the photos of the cosmos that are embedded in key moments of certain stanzas. It is hard to talk about these poems without noting the layout and the way they are shaped. The book’s composition makes more sense when you realize that a few of the pieces were intentional collages, drawn from scientific works and Korean dictionary entries, and others were presented initially to the world as paper or digital chapbooks – longer running discourses spread out across many pages.

At the line level, the sense of vast spaciousness and of outer space is reinforced by the turns of phrase and subject matter. The book begins with the long poem, On Light, and we learn our ideas of light waves being like water waves can work, and then don’t work. As she does later in the book, here Lee favors using unfinished symbols – never closing a parenthesis or bracket– to leverage that feeling of stretching the reader’s eye outward, that the poem opens its ideas about light it is never finished.

For example, after musing that the sun’s surface is like a turbulent sea, Lee adds these lines:

< How can one attend to the context and its surface simultaneously?

< Attention disintegrates and refracts as light across the atmosphere

In more classically composed, if prosaic lines, later she continues in On Light:

“It is an eerie feeling when the sun suddenly fades into the daytime sky.

We do not know the sun inside a computer.

Her language is crisp, the lens clear, and the vista wide. Readers who enjoy experimental forms striving for spaciousness and precision will enjoy her particular treatment of human emotions and the cosmos.

At the start of the book’s title poem, Christine Kitano writes: “The Korean word for heaven is ha-neul nara, a kenning that translates literally to ‘sky country.’ It was a word often used by potential immigrants to describe the United States.”

Kitano has rich sources of family material to draw from – a Japanese-American father who was interned at Topaz, Utah, during World War II, and a Korean grandmother who fled Korea in 1953, pregnant with the author’s mother, running with a five-year old aunt strapped to her back. Most of her poems are lyrical, free verse, not experimental in shape, not integrated with photographs or complex layouts to get their imagery into the reader’s mind. But she doesn’t need to play with layout; the images stick.

In writing about internment at Topaz in “About the Trees”, Kitano explores what incarceration survivors say and cannot say, choose and cannot choose when they try to translate the experience to later generations. She closes with these six exquisite lines:

“Believe me. The men were not angry.

But when they dug the trees from the earth

anger bled through their hands.

The men returned with the trees

over their shoulders, the stunned roots aloft

and curled into incomplete fists.”

From this initial section, which deals with her relatives’ sense of endurance over incarceration, we spill over into other strong poems of memory, loss, and emergence of self.  Each poem serves as its own anchor, its own voice. And while some are clearly the author in recollection, others are vivid explorations of experience. We get the sense of an entire life for a dental assistant – a continuing saga of an insomniac – the clear-yet-murky memory of drowning and rescue in a hotel pool. Sometimes the camera pans in very close, as with the rebellion of a young girl turned into the destruction of her dress-up clothing.

Kitano’s gifts are in the telling details and her strong sense of integrity even when she is writing about “A Story with No Moral.” Over and over we are brought to the immigrant perspective, as in the opening stanzas of “Chicken Soup”, where her Korean grandfather works as a janitor in LA:

“The immigrant sees, not the postcard-perfect lights

but the scuffed tiles, dust-lined desks, the darkening

throats of toilet after toilet.”

Later in the poem we switch to the Korean grandmother cooking with the speaker:

“It’s a simple recipe: boil until the meat

In the end, the Korean grandmother has the last word of the book, or at least the last image – illuminated by the lights of a bus to bring her home. In that lucid snapshot, the grandmother becomes more than the autobiographical memory, just as a ferryman in Greek or Roman mythos would become more than a ferryman. In the end of this stunning collection, Kitano has the grandmother bring us all home.