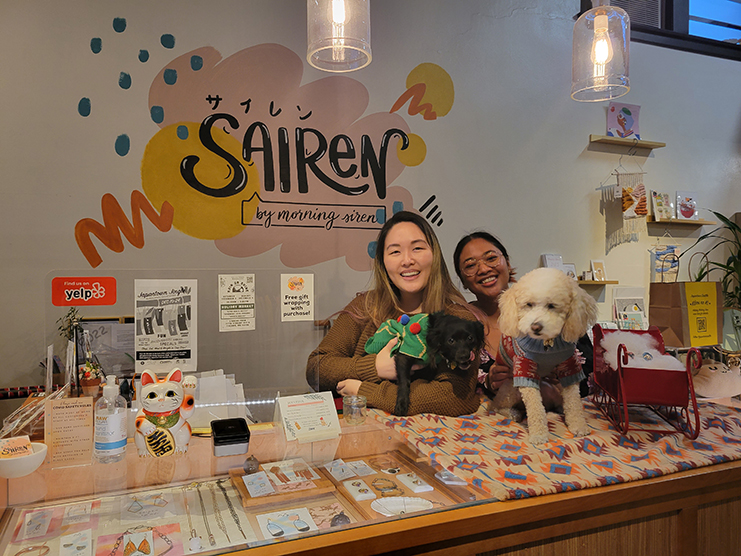 The holidays are always a tumultuous time for uninitiated gift-givers, and it can be easy to give in to the lure of cheaply-produced, convenient online shopping. However, for some small businesses in the city, the holidays mark a perfect opportunity to share their art and craftsmanship with the world.

Some such businesses are KOBO at HIGO and Sairen, two women-owned Japanese American shops located at the Jackson Building in the Chinatown-International District (CID). The building, at the corner of 6th Ave S and S Jackson St, is in the heart of the CID’s humble Nihonmachi, or Japantown.

KOBO was originally founded by spouses Binko Chiong-Bisbee and John Bisbee in 1995. Relocating from their original Capitol Hill location to the Jackson Building in 2004, inheriting the old Higo Variety Store location, the Bisbees have been balancing traditional Japanese sensibilities with contemporary art and objects from local artists.

“That’s what you feel when you come into our space, is that it’s a touchstone to the past,” Chiong-Bisbee said. “I think people connect with that, because so much of Seattle is being torn down and remade and a lot of these older spaces are so transformed that there’s no connection to the past. We feel very honored to be able to be in such a space and share it with the community.”

Sairen, comparatively, is quite young — three years after Kaitlin Uemura and Kaitlin Madriaga founded the clothing brand Morning Siren in 2017, the owners of Momo Japantown approached Uemura to take over the space. Now, two years later, Sairen is fully-realized with Uemura and Madriaga at the helm.

“That encompassed us bringing in a lot of artists and makers from around the city,” Madriaga said. “We wanted to bring other Asian-American and POC artists into this space. And then we also carried over some of the designers that had good relationships [with the previous owners] as well. So we wanted a mix of old and new in this space.”

The Jackson Building in which these businesses are housed is managed by Paul Murakami, who, along with his brother Craig, inherited the building from their father’s distant cousin, Masako “Masa” Murakami. The retention of Japanese-American owned businesses in the building was a wish of the late Masa Murakami, who wanted the spirit of Japantown to endure.

“The Murakami family, the three siblings (Masa, Asako ‘Aya’ and Kazuo ‘Kay’) and their parents, occupied that building since 1933,” Craig Murakami said. “Gradually we got more involved when Masa was the remaining sibling. … [Paul] ended up working more and more with Masa, trying to figure out the transition. She was always very adamant to not sell the Jackson Building because she loved [the Higo store]. She knew its significance to the community.”

The COVID-19 Pandemic uprooted the status-quo for KOBO — Chiong-Bisbee compared the feelings of tumultuousness and uncertainty to the incarceration of Japanese Americans in World War II. Now, KOBO has recovered, reviving old traditions like the Simple Cup Show, a juried showcase of cups and mugs from both local and international artists.

“When we had to shut down, I thought, ‘Oh my god, how are we going to eat?’” Chiong-Bisbee said. “‘How are we going to survive this? We’re so fortunate that we have this really cool and talented team. … We were able to connect with our audience more.”

Conversely, with Sairen opening in November 2020, both Uemura and Madriaga felt a strong sense of support from the Nihonmachi community, especially from the rest of the Jackson Building tenants.

“The first year was amazing,” Uemura said. “The community [gave us] so much love and support.”

For any gift-giving, Chiong-Bisbee recommends gifts that have a lasting practical value — objects and tools that can be used with love for a long time.

“You [go] through the trouble of making a wonderful dinner, and if you put it on something nice, it actually will taste better,” Chiong-Bisbee said. “Handmade tableware, we often work with local ceramic artists here in Seattle. We also have a variety of books. … A lot of our staff members are makers, so we have a lot of ‘how-to’ books.”

Uemura and Madriaga are fans of Sairen’s collaborations with other businesses, including the Sairen x Lulumiere candles and shower steamers — bath bombs for the shower.

“A lot of artists don’t have a place to sell their work or they’re just starting out,” Uemura said. “We see artists and we believe in their work and want to support them — we know how it feels. So we love supporting minority-owned, Asian-owned or women-owned businesses that are local, and try to give them as much support as possible.”

This holiday season, instead of burning through a list of cheaply-produced goods from the internet, consider visiting a shop like KOBO at HIGO or Sairen. You’ll be supporting not just local, small businesses, but a diasporic legacy that will continue to endure for generations to come.

“We want to encourage people to come down and shop and visit that area because it’s not only a great place to shop, it’s a great place to get to see some of Seattle’s history,” Murakami said. “It’s really a kind of historical landmark for Seattle.”

Both Sairen and KOBO are located at the Jackson Building, on 6th Ave S and S Jackson St.