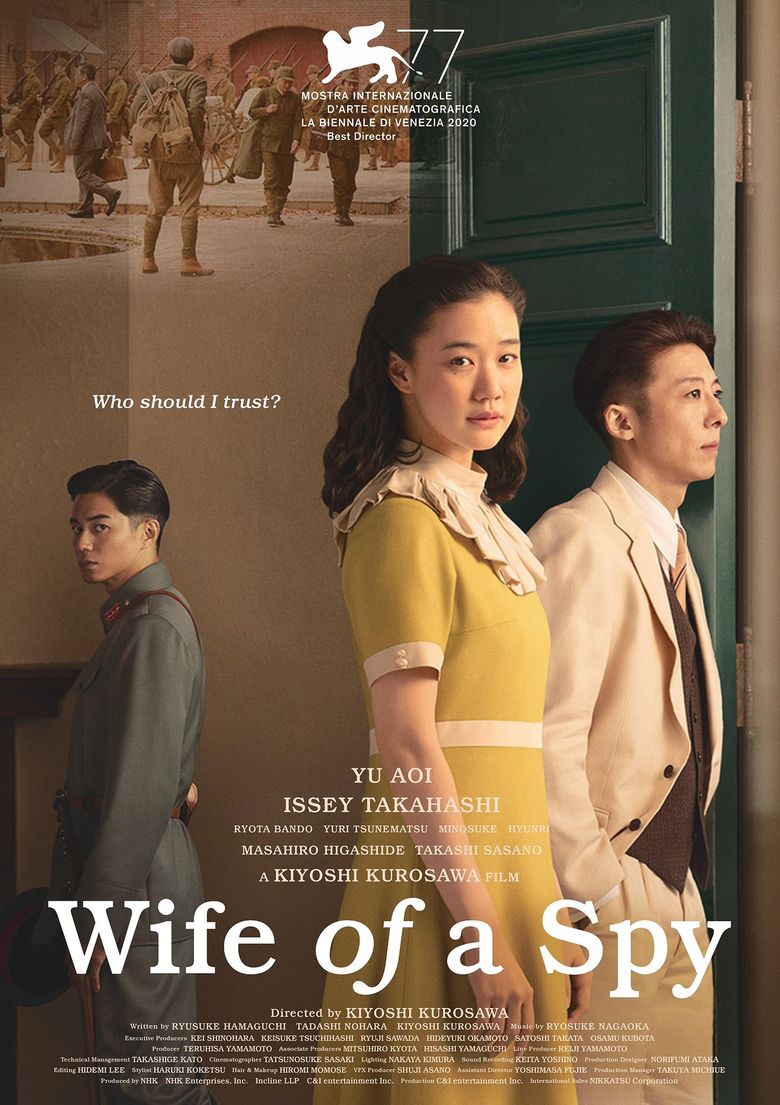 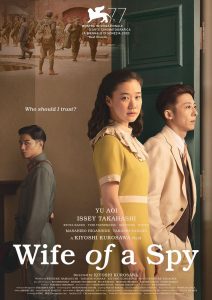 Kiyoshi Kurosawa (Cure, Pulse, Tokyo Sonata) is known for his meticulously plotted horror films but in his latest film, Wife of a Spy, he’s turned to Hitchcockian suspense. Set during the outbreak of WWII in Kobe, the film tells the story of a husband and wife caught in a struggle between conscience and country. It received the Silver Lion prize for Best Director at the Venice Film Festival. The film is distributed by Kino Lorber had a short run at Northwest Film Forum October 1 – 3, 2021. One can only hope it returns to Seattle for a longer run in the future.

“What has Japan become?”

This question is asked by a more incidental character, but the weight of those words hang over the entire movie. While many movies about World War II and Japan focus on the devastating aftermath of the war, Wife of a Spy focuses on the buildup to the war and the sociopolitical changes that swept up the Japanese people at the time. Specifically, the darkness at the heart of this movie radiates from Manchuria, as the horrible secrets of the Japanese Imperial Army are uncovered.

Any students of history will likely know exactly where this is going, but this review won’t spell everything out – the way that award-winning director Kiyoshi Kurosawa has his characters tug at those threads ratchets up the drama in the first half of the film. The resulting fallout is then explored, often in visceral ways, questioning from all angles how a country could fall to the madness of war.

We see the events of this film unfold largely through the eyes of Satoko, performed masterfully by actress Yu Aoi, whose husband, Yusaku, makes a fateful trip to Manchuria that changes both of their lives forever. The resulting tension in their marriage grounds larger ideas of nationalism, justice and war, as Satoko is caught between her cosmopolitan, justice-minded husband and her nationalistic, childhood friend Taiji, a military officer. Satoko is written and performed with all of the layers and complexity you’d expect from someone trapped in such an impossible situation, and also allows the film to explore the ways that women are expected to sacrifice of themselves in ways that the men in their lives never do for them.

The ending should be experienced fresh, with as few hints given as to what transpires as possible, but I’ll say this – some of the most harrowing and haunting scenes from any piece of media this year can be found at this film’s conclusion. This is a movie that pulls no punches about the war crimes of the Japanese Imperial Army or of the effect of war on a country’s citizens.

Wife of a Spy was filmed in 8k, and the effect is stunning. Costumes look textured and textile, the sets are beautiful and fully realized, and, in many scenes, light floods into rooms from the outside, making us keenly aware when that light is then gone. There’s a real confidence in the blocking and cinematography of this film, and the crispness of the 8k capture makes the experience of this film something like watching a play. This is most apparent in the film’s many interior scenes, allowing the viewer to focus in on the subtleties of everyone’s performance.

Kurosawa is perhaps best known of his contributions to the horror genre, with favorites like Cure and Pulseunder his belt, and these chops allow him to infuse the more tense scenes of the film with a real sense of dread and terror. There are several scenes of the film that are genuinely hard to watch, and these are brought to life by Kurosawa’s command of the camera.

Period films such as this one allow us to examine the sociopolitical conditions of the past, in order to make us wary of how they could be replicated in the present. Those conditions – nationalism and its inherent irrationality, the dangers of militarism – are still present all around the world today.

Wife of a Spy is streaming virtually beginning October 15, 2021. Tickets can be purchased via Kino Marquee. Available for viewing on fireTV, Roku and AppleTV.