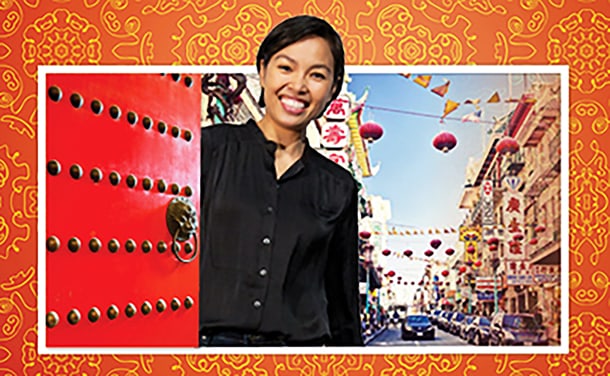 Imagine that someone in your family is a playwright. Now imagine that this family playwright decided to write a play about your family itself—and you were the main character. That is the precisely the subject of playwright Lauren Yee’s play King of the Yees, to be presented at ACT Theatre this month.

The King in the play’s title is Lauren’s father, Larry Yee. “I always thought my father deserved to have his own play,” Lauren Yee said. “He’s a larger-than-life character, and his devotion to Chinatown and the Yee Fung Toy Family Association was one that puzzled me throughout my life.”

The closeness of her main character made the project more, rather than less, challenging. “I had no idea how to write it and how to fit everything wonderful and frustrating about families and Chinatown into a single play,” Lauren said.

Her process has been one of experimentation, which made the play a work-in-progress for a long time. “I write very quickly and I throw in all sorts of ideas and characters as I’m going through the writing process,” she said. “I’m not precious about my work and so there are plenty of scenes that got cut in the end. But I need to try them out first to see if they’ll work.”

And then life itself helped Lauren finish the play. “As I started writing, some of the real life events in the play happened, which moved the play in the direction that it’s taken since then,” she said. “A truly stranger than fiction experience.”

She also says that, in this project, form follows function. “I believe that a story should be structured in a way that reflects the content,” she said. “A story about family and Chinatown is necessarily going to be cluttered, messy, emotionally fraught, and funny.”

But Lauren claims that King of the Yees isn’t your standard family drama. “My dad and I have a good relationship; we love each other,” she said. “So the tension between a parent and child who share a good relationship but can’t really talk about the emotional distance that’s still between them is a subtler, trickier journey.”

Happily, Lauren’s father was pleased rather than offended by the project, and even volunteered to be part of the rehearsal process. Actor Stan Egi, who plays the role of Larry Yee, found the real-life Larry to be just as he is written in the play. “In researching this role, I went up to San Francisco and spent time with the real Larry Yee and had such a great time,” Egi said. “He is so dedicated to his Yee heritage and community, and it is inspiring to future generations.”

The other actors agree. “I can really relate to Lauren’s relationship with her dad,” said Khanh Doan, who plays the role of playwright Lauren Yee. “Growing up as children of immigrants and straddling two cultures certainly impacts your sense of identity.”

The challenge of portraying real-life individuals affects the entire cast. “It is a little intimidating to play a character that’s based on the playwright,” Doan said.

Ray Tagavilla, who plays multiple characters throughout the play, concurs. “Raymond Chow is a very interesting character,” he said. “Besides the fact that he’s a real person, he’s written as a larger-than-life, blow the roof off your house personality with a sensitive heart.”

Actor Joseph Ngo, who likewise portrays several characters, finds this the ultimate tight-rope-walk of the play. “The daily challenge that we face, as I see it,” Ngo said, “is a fine balance that we’re creating between comedy, the challenge of stereotypes, and working outside of caricatures in creating solid characters.”

The play has been a learning experience in numerous other ways, as well. “We had an instructor teach us how to do the lion dance,” Doan said. “It is so much harder than it looks! The specificity and strength to bring the lion to life is impressive.”

Actor Annelih Hamilton, who also plays multiple roles in the play, feels the same about learning the lion dance. “I have a whole new appreciation for lion dancers!” Hamilton said. “I knew that it was hard, but the specificity in the movement from the footwork to giving the lion personality by shaking his head with my upper body … Next time I see a lion dance, I’ll have more of an idea of how hard those dancers train.”

Hamilton has encountered other challenges, as well. “I’ve never spoken Cantonese, and one of my characters speaks a little bit, so I’ve been working hard on being as authentic as possible,” she said. “I’m discovering how tones can alter the meaning of a word. No wonder learning Chinese is not an easy task!”

Even the show’s designers have found the project educational. “I had never known about the tradition of the Szechuan face changer before,” said set designer Carey Wong, “and so this was an intriguing Chinese theatrical practice that I was introduced to by this show.”

Wong also found resonance with other Chinatown-related projects. “I’m currently working on the redesign of Beyond the Gate: A Tale of Portland’s Historic Chinatowns,” he said. “This is an exhibit originally mounted for the Oregon Historical Society in 2016 that will be reinstalled in the new Portland Chinatown Museum for a spring 2018 opening.  Many of the themes in King of the Yees resonated with the work that I’m doing on Beyond the Gate.”

Actor Ngo likewise appreciates the links among issues facing Chinatowns across the United States. “I find the play increasingly relevant in terms of the questions it poses to the audience about culture, identity, and the similar challenges of Seattle’s International District when compared to San Francisco’s Chinatown.”

At its heart, actor Stan Egi finds this play to be an homage not only to Lauren’s father Larry Yee, but to others just like him. “People like Larry Yee give so much and dedicate themselves to their community and people in order to protect and preserve their culture,” Egi said. “Now more then ever, this is so important.”

‘King of the Yees’ will run from September 8 to October 1 at ACT Theatre, at 700 Union Street, Seattle. For more information, see visit www.acttheatre.org/Tickets/OnStage/KingoftheYees.