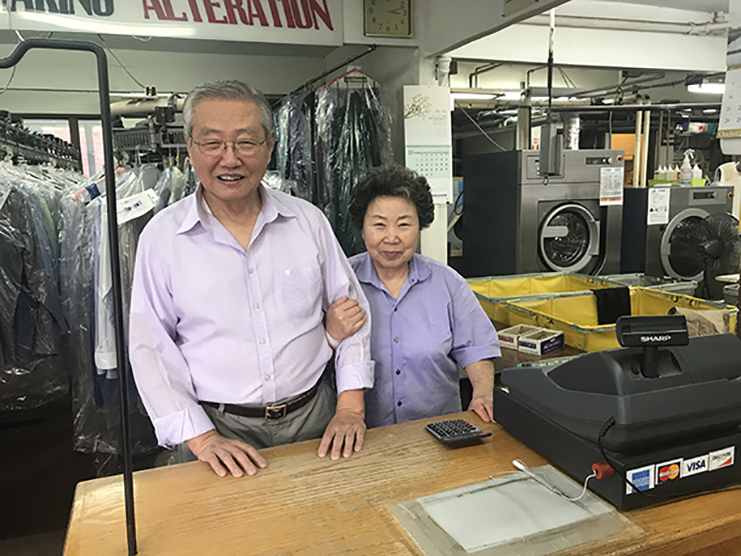 By about 3:00 PM every day, Hyen Sook Kang would start to feel tired and have trouble breathing. Thirty-three years ago, she and her husband, Tae K Park, started their dry cleaning business, Sun Drive-In Cleaners, in Wallingford. The business occupies the ground floor of an apartment building.

The first sign something wasn’t right came six years ago when a neighbor complained about the smell coming from downstairs. Workers from the city came to check it out and said nothing was dangerous, Mr. Park remembers, but the neighbor moved out anyway.

Sun Drive-In Cleaners was using a carcinogenic solvent commonly used by dry cleaners called perchloroethylene (PERC). Now, thanks to a $20,000 grant from the Local Hazardous Waste Management Program in King County (LHWMP), the Parks have switched from PERC to professional wet cleaning technology. With wet cleaning, machines use state-of-the-art technology to safely and efficiently clean garments in water, without using hazardous chemicals.

Mrs. Kang doesn’t get sick from PERC anymore, and the bad smell is gone.

The grant the Parks received is part of a commitment to eliminate PERC from all King County dry cleaners by 2025. About 70 dry cleaners in the county still use PERC. Sun Drive-In Cleaners is one of five businesses that are part of a pilot version of the program. Later this year, five more businesses will get grants and then 10 per year until PERC is eliminated. The program also includes technical support and training.

PERC has been linked to cancer, nerve damage and neurological problems. It seeps into the ground water and leaks into the air. There are 189 sites in King County contaminated by PERC, and several King County communities draw water from shallow aquifers. While PERC levels in the soil and water don’t present a danger at this time, the wait-and-see approach is not a risk work taking.

LHWMP has been working with dry cleaners to mitigate the effects of PERC, but now is the right time for a sustained commitment to getting rid of this nasty chemical altogether. Many businesses are due to replace their aging PERC machines. PERC is also currently being reviewed for a potential federal ban, and LHWMP wants dry cleaners to switch to wet cleaning instead of another solvent.

King County Councilmember Rod Dembowski is the Chair of the King County Board of Health. He remembers first hearing about PERC when he represented a dry cleaner as a lawyer in private practice. His client, who had developed cancer, sued his insurance company over the cost of cleaning up his contaminated site, which nationally averages $200,000.

“I gained firsthand personal knowledge of the dual harms of PERC in terms of environmental contamination and its cancer-causing characteristics,” Dembowski said. “This is an opportunity to get ahead of the potential federal ban and do the right thing but also to do it with an equity and social justice lens.”

“We’re committed to working with the Korean dry cleaning community,” said Steve Whittaker, a toxicologist who has worked with dry cleaners since he joined LHWMP 10 years ago. “These are some of the hardest working members of our community. We recognize that many of them work six, sometimes seven, days a week. We really want to help them succeed.”

Whittaker and his colleagues at LHWMP view this program as a partnership with the community, a product of a relationship that stretches back over 20 years. They’ve worked with the Korean Dry Cleaners Association and leaders like Michael Park, the former mayor of Federal Way who owns a dry cleaning business. They’ve held focus groups conducted in Korean and scheduled for Saturday nights when they knew the dry cleaners wouldn’t be working. Educational materials are reviewed by members of the community, and interpreters accompany county workers on site visits.

The grants are for $20,000, but wet-cleaning machines cost between $40,000 and $60,000. While that could be a barrier for switching, it hasn’t been an issue during the pilot phase, and the cost is offset by reduced bills.

For Mr. Park, a normal water bill used to run around $2,100. After he switched to wet cleaning in July, his next bill, which was split between one month with PERC and one month with wet cleaning, was down to $1,100. The bill after that was $385, less than one-fifth of what his bill used to be.
And Mrs. Kang is quick to tell you that the new machine is better at getting out spots and that there is less shrinking. The washing and drying cycle used to take an hour and a half, and the process now totals 28 minutes.

Now Mr. Park and Mrs. Kang are ambassadors for the program. Other dry cleaners have visited their business to check out the new machine, and Mr. Park has recorded a video where he explains, in Korean, the benefits of professional wet cleaning technology.

They are using their voice to help colleagues and members of their community do business in a way that’s safer, gets better results and improves the bottom line.
Want to help your dry cleaner switch from PERC? They can call 206-477-0660, email [email protected] or look out for materials coming early next year after the pilot phase is complete.