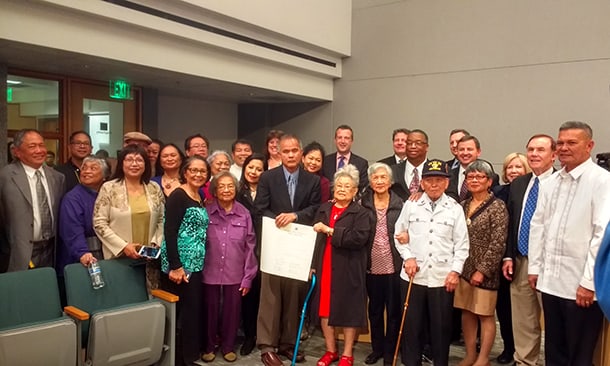 At a ceremony on Monday, October 16, attended by family members of Filipino World War II veterans, Councilmember Larry Gossett read the proclamation and gave brief remarks paying recognition to the Filipino “forgotten warriors of freedom” who fought in World War II. “This year we celebrate those WWII soldiers who are finally being honored for their service to a country that didn’t recognize their sacrifice for over a half century,” Gossett said.

Some 260,000 Filipino and Filipino Americans fought on the side of the United States during World War II. Over 57,000 were killed in action. Many endured horrific wartime events such as the Bataan Death March. Between 2,000 and 6,000 Filipino WWII veterans survive in the United States, 12 of them in the King County region.

These soldiers were promised military benefits after the war, but this promise was quickly broken by Congress in 1946. Gossett noted that in 2005, the Council encouraged King County residents to recognize the Filipino veterans and pressure the federal government to honor them.

“There’s nothing more joyful, after 75 years, to receive this proclamation,” said Brigadier General Oscar Hilman, an Iraq War veteran and Director of Region 8 of the Filipino Veterans Recognition and Education Project. Hilman and Cindy Domingo—Legislative Aide to Councilmember Gossett and longtime Seattle Asian American and Filipino civil rights activist—will be attending the recognition ceremony in Washington D.C. on October 25.

“This means a great deal to the Filipino community,” said activist Annie Galarosa. Her father, a Filipino World War II veteran, will be 101 years old when he receives recognition.