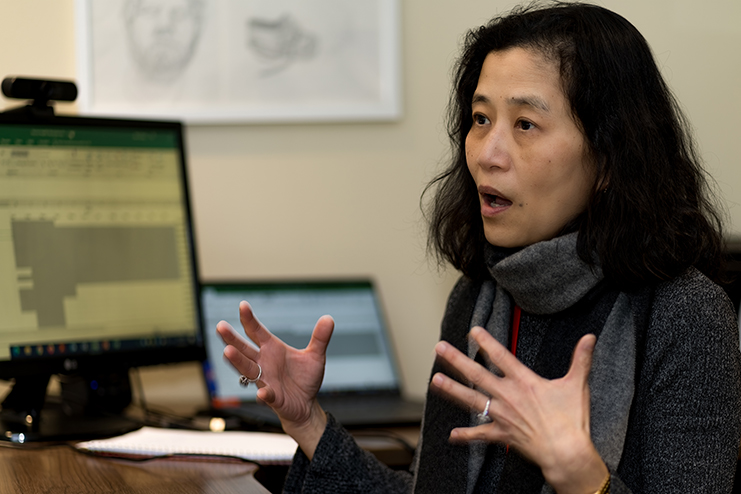 Earlier this month, Kin On Health Care Center began the search for a new chief executive officer following the surprise departure of Min Chang. She has accepted a job as CEO of the ophthalmic supply firm MicroSurgical Technology in Redmond.

Chang, who has led Kin On since November, 2020, took over from previous CEO Nigel Lo. Chang’s last day at Kin On will be February 28. She joins MicroSurgical Technology on March 1.

Chang came to Seattle from Wilmington, Delaware. Before joining Kin On, she spent 13 years with Omnicom Group, a global marketing communications firm. Her family home is just two houses away from the lakeside residence of President Joe Biden. Chang’s husband of 28 years, Daniel Chu, is an investment banker with Jefferies.

At Kin On, Michael Woo, longtime staff member and current social services director, will serve as interim CEO until appointment of a permanent replacement.

“We have big shoes to fill with Min’s departure,” Kin On board president Sherwin Tsao said. He noted that Min stewarded Kin On through one of the most challenging periods in its history.

In 1987, Kin On opened its doors as the first culturally-sensitive nursing home for non-English-speaking in the Pacific Northwest, following a scrappy $500,000 fundraising effort by a broad coalition of Chinese American community leaders. As Kin On has evolved into an anchor non-profit in the region, it has expanded its services to include home care, rehab and a menu of assisted living options.

“Min’s been awesome,” Tsao said. “She helped lead us through COVID-19, including dealing with operational and health-related safety issues. We had to protect our residents and the community as well as expand services and improve our financial performance.”

Jessica Wong, chief of staff at Kin On, added, “I’ll miss her positivity and encouragement and wish her the best. She has a big heart and showed true care for our residents and staff. In fact, she’d often be the first to get to the office and the last to leave.”

Chang said it has been heartbreaking to “see our residents unable to have family visit them due to the lockdowns in our facilities” and “the lack of social interaction within the facility when we have cases inside.”

Fortunately, she said, Kin On has implemented “strong infection control measures” and has developed “mental toughness in terms of dealing with the pandemic. We are 100 percent fully vaccinated from a staff perspective and 99 percent in terms of residents. This has helped tremendously.”

Chang said that even though her tenure at Kin On has been brief, she feels that much of the “heavy lifting”– improving finances and developing new lines of business — has been accomplished. “We’ve also brought talented people to the leadership team, both from inside the organization as well as outside. Seventy percent are new. Kin On is headed in a good direction.”

As she steps down, Chang said, Kin On is “financially stable.” “We have a balanced budget and plenty of reserves,” she added.

“The experience of being the CEO at a mission-driven organization has really changed me,” she said. “I’ve lived all over the world. I’ve never felt this overwhelming sadness. I really immersed myself in the community and have gotten to know the human side.”

She said she relished “making the rounds” and spending time with each of the 75 nursing home residents. “It gave me great joy,” she said. “I’m not clinically-trained, but I can provide some moments of companionship, sitting with them, kneeling, squatting, listening to them talk. You may see them as frail, elderly people, but you begin to understand that they’ve lived incredible resourceful lives.”

Chang, noting that she will continue as a Washington resident, said she wants to contribute to Kin On as a volunteer, possibly as a future board member, certainly as a donor. “I love Kin On,” she said. “I will always leave a part of my heart here.”