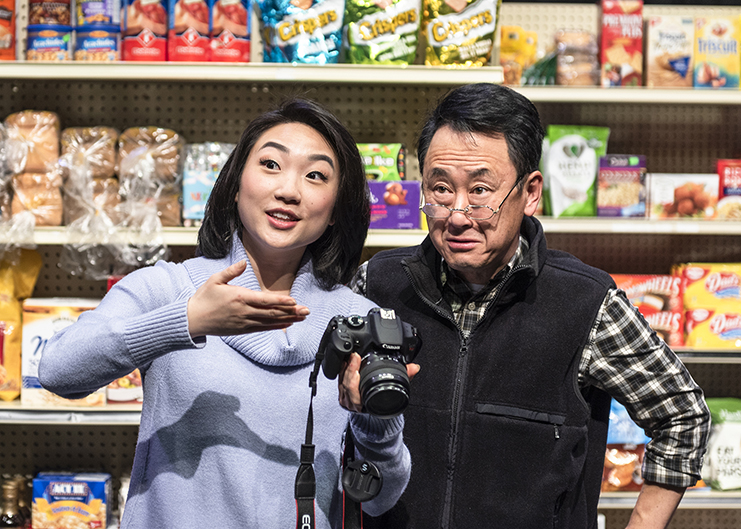 Kim’s Convenience by Ins Choi was originally a play that became a popular TV series in 2016 – but now it’s back on a local stage at Taproot Theatre. The play centers on the Kim family, whose elder members, Appa and Umma, run Kim’s Convenience store.

David Hsieh is co-directing this production with Taproot’s producing artistic director Scott Nolte. “While this is our first directorial collaboration, we’ve known each other, and have supported each other’s work for years,” Hsieh said. “He knows the space so extremely well for sightlines and what Taproot audiences will enjoy, and I bring my unique perspectives on the show from the Asian American experience.”

The cast members also felt a strong motivation to audition for the production. Annie Yim, who plays the role of Umma (Mrs. Kim), only had to read the script once. “By the end of the play I was bawling,” she said. “I knew then I wanted to be a part of the production.”

Likewise, Parker Kennedy, who plays the role of Mr. Kim’s estranged 32-year old son Jung, felt a deep connection to the fictional Kim family. “The characters in the show remind me very much of some people who I treat like family,” Kennedy said. “They too came from Korea and have braved a new life here in North America and hold similar views on life.”

Initially, Yim wasn’t certain that the role of Umma was right for her. “But I re-read the play a couple of times, and it was then I saw her strength, her humor, her deep love for her children and pride in her husband,” Yim said. “Much of this rang true for me about my mother and her guidance of my own family.”

Each of the characters labors in different ways to create a life in the U.S. “Even though I think Jung and I are very different people, I feel a deep connection with this character,” Kennedy said. “His struggle to be good enough in a world that is moving ahead of him resonates deeply with me.”

The actors bring an empathy that they hope will translate onstage. “I think Umma is most beautiful for what she doesn’t say,” Yim said. “It is so true that parents, and especially first-generation immigrant parents, give their all for their children. And more often than not, the parents never say this or express this. They just do.”

Rounding out the cast is Obadiah Freeman, who faces the quadruple challenge of playing Rich, Mr. Lee, Mike and Alex. “All of these people are endlessly fascinating because they embody the spirit of the neighborhood they live in and concurrently have totally different motivations,” Freeman said. “Having a background in improv, I loved the idea of having the opportunity to embody these fundamentally different people all living in the same world.”

Even with the team’s general familiarity with Korean American culture, there have been many moments of discovery. “As we are rehearsing and going in depth with the script,” Kennedy said, “I am learning more and more the sacrifices my own parents gave to provide me with the life I grew up with and know.”

Freeman, who is African American, has also found parallels between the Kims’ story and his own cultural background. “I’m from a community of people who’ve been marginalized and oppressed in the United States and across the world,” he said. “To learn about a group of people whose history has made them a community with a similarly rich culture after having championed major struggles has brought me closer to an understanding of this ‘human’ thing we do.”

Despite the challenges of competing with a well-funded TV production, Hsieh is confident that his team rises to the occasion. “I’ve worked on a lot of plays that have had a good number of Asian characters,” he said, “and this may be the first production that has cast 100% ethnically appropriate actors in each role, which has also added great insights into the Korean culture, language, and history featured in this play, as well as the authenticity of this production.”

As Kennedy commented, “It’s not every day that a show about your own ethnicity and identity comes along.”