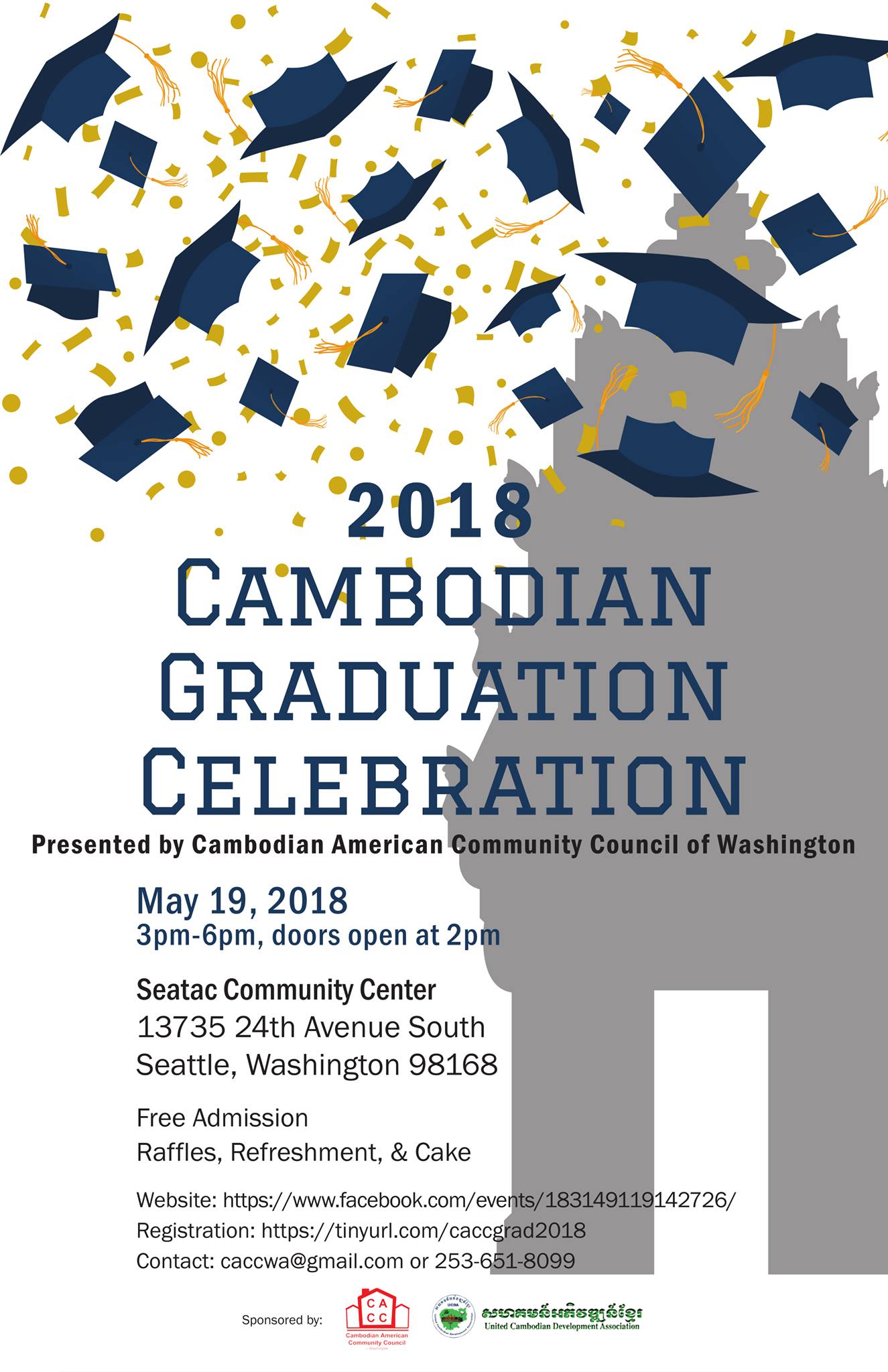 On Saturday May 19, 2018, the Cambodian American Community Council of WA (CACCWA) held its second annual Cambodian Graduation Celebration at the SeaTac Community Center. (Disclosure: International Examiner fellow Bunthay Cheam is an active member of the CACCWA).

The event recognizes and honors academic achievement within the regional Cambodian American community, and it also serves as a space for community members to engage intergenerationally. Sponsors of the event included the Commission on Asian Pacific American Affairs (CAPAA) and the United Cambodian Development Association.

CACCWA was founded in 2015 following a community event called Remembering the Past and Welcoming the Future, which reflected on the 40 years that had passed since the Cambodian Genocide. Community members wanted to capture the success and momentum of that event and carry it forward, and CACCWA was established with that end in mind. The group currently coordinates with over a dozen Cambodian community organizations all over Washington state.

Alexander Khem, who will receive a bachelor’s degree in Media and Communication Studies with a concentration in Social Justice and Diversity from the University of Washington, was at the event. “I signed up to be part of the event is because I wanted to connect and meet all Khmer student graduates across Washington state to come together and rejoice as a community and see everyone’s accomplishments for completing high school or college,” he said.

Event co-chair Nyda Ouch, who graduated in 2017 with a degree in biology from the UW, recognized the importance of events like this to a marginalized community. “Education statistics for Cambodians are an excellent example highlighting the necessity of programs targeting the needs of southeast Asian and API populations,” she said. “We must advocate for policies which disassemble barriers to education for Cambodian American communities and the diverse groups which exist within it. On that same note, these events also demonstrate the determination and resilience of Khmer students.”

Cambodian Americans, compared to their peers, fall toward the bottom. A 2015 report released by the Center for American Progress cites 37 percent of the Cambodian American population in the U.S. with less than a high school degree and only 14 percent with a bachelor’s degree compared to 29.6 percent U.S. average and 49 percent Asian American average.

“I think having these events are important because everyone deserves to celebrate their identity as Cambodian Americans, especially towards higher education,” said Khem. “Many of us who know or have families living in poverty may or may not understand how difficult it is when we have parents with language barriers unable to speak English or speak little English to support their children every day.”

“As a student, accessing education wasn’t easy for me,” said Touch. “My journey at UW relied on scholarships and grants. Each year I nervously waited for financial aid to determine how they would control my finances. There have been times they severely cut my aid or threatened to revoke it. Financial hardships are one of numerous challenges facing Cambodian Americans.”

To help address this issue and many others around access to higher education within the community, the CACCWA established an Education Subcommittee. Past subcommittee co-chair Bopha Cheng said of its role that it “provide[s] a platform to uplift and recognize the academic accomplishments in our communities. Both to combat the negative stereotypes of Cambodian Americans and to highlight the success stories.”

“This was an opportunity to educate the larger communities and our own Cambodian communities that our students face a different set of challenges from their peers, white and east Asian counterparts as well as generational ideals for their children,” she said.

In a 2013 SEARAC report focused on Washington state Cambodian Americans, a majority of students, 60 percent, live in single parent homes. 81.7 percent of Cambodian Americans also qualify for free lunch, the highest amongst other minority groups.

Amongst but not limited to the multitude of causes that create access issues to higher education for Cambodian Americans, language barriers have and continue to have a drastic effect on the population. In the 2013 SEARAC report, 40.5 percent of Cambodian Americans in Washington State speak English less than well compared to 8 percent of the total population.

Because of these barriers within the Cambodian American community and among the state’s southeast Asian population in its entirety, the SEARAC report concluded that Washington state Southeast Asians are most at risk of experiencing alienation and marginalization in schools.

A community taking charge of its future by uplifting future scholars

Because of this lack of access and barriers in navigating higher education for Cambodian Americans, on of the CACCWA’s longer term strategy is to create a mentorship program.

“That’s one of the next bigger steps,” said event co-chair Chunneath Kravanh, who is a graduate of the UW and is currently working on his master’s degree at Seattle University’s College of Education School Counseling program. “Really get the community involved, like high school graduates, college graduates, to connect to others.”

Khmer Student Association (KhSA) of UW President-elect Ammara Touch celebrated the event because she said it created conversation about equality and equity, as well as inclusion and liberation.

Keynote speaker and CAPAA Commissioner, Sina Sam, invited the audience to take a step back and conceptualize the challenges the Cambodian American community faces. “It was really powerful to see how various environmental/external factors can influence a person’s social mobility. And it’s also important to realize that the trauma faced by our community has huge implications in those external factors, such as accessibility to resources and lack of education,” she said.

Although Commissioner Sam participated in the event as a representative of CAPAA, she revealed, “The more important reason was the opportunity to let my community know I see them. I am proud of their sacrifices and accomplishments. That I am them. I stand on the many shoulders that have come before me, and they can stand on my shoulders to lift themselves up on their way up to even greater achievements.”