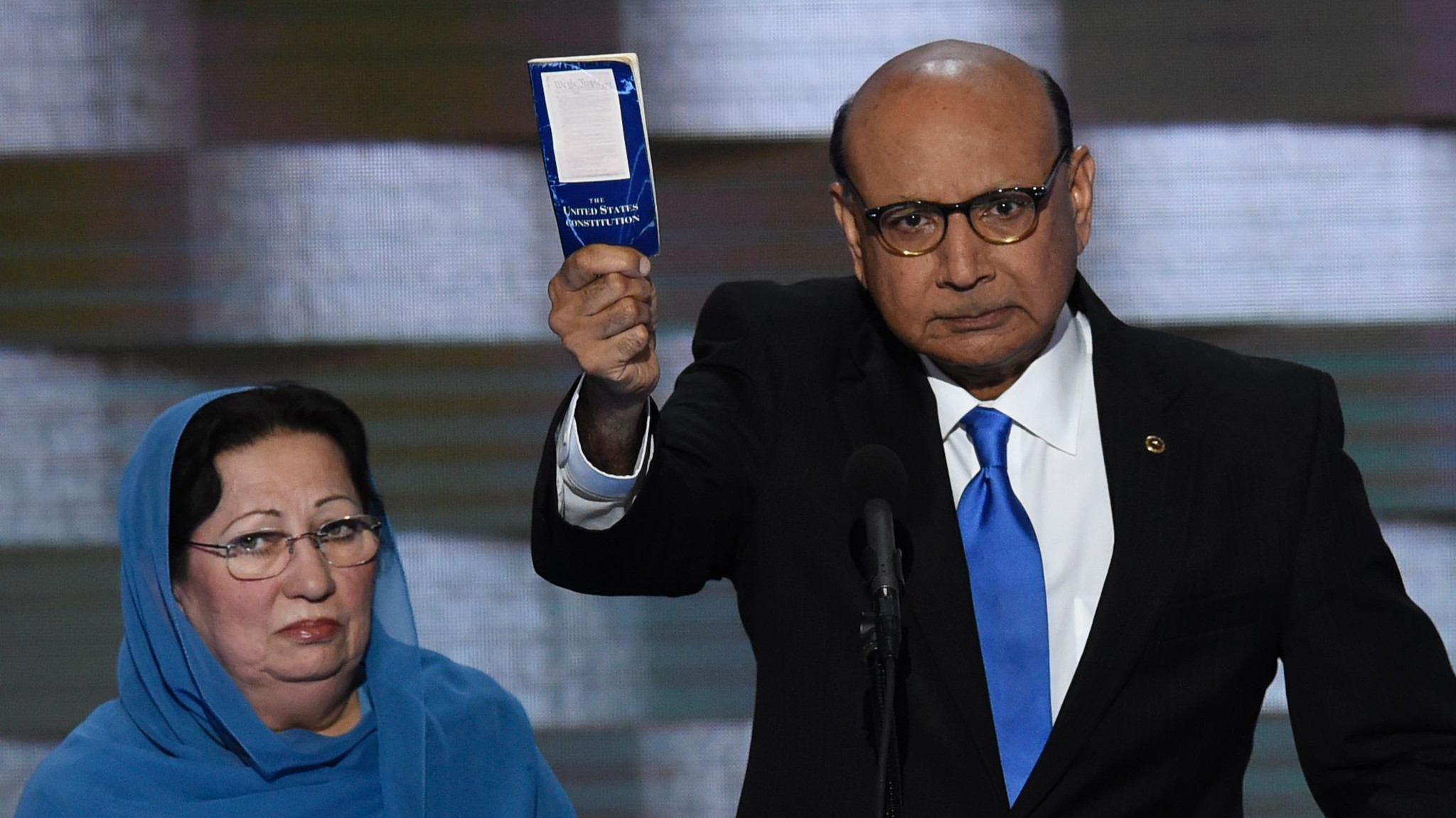 Khizr Khan is not easily intimidated.

The headliner at Densho’s February 19th Day of Remembrance program at Seattle Center, Khan was born into a family of poultry farmers in rural Pakistan, the oldest of ten children. With his wife, Ghazala, he emigrated twice—to Dubai first, and then to Houston, with two young sons in tow. After a few more years of hard work, Khan had acquired another son, a law degree from Harvard (he’d already passed the bar back in Punjab), a good job, and his cherished U.S. citizenship. Soon there was a house, walking distance to the high school in Silver Spring, Maryland, where his oldest boy, Shaharyar, would be valedictorian.

But life wasn’t done with Khizr Khan. On June 8, 2004, his second son, Army Capt. Humayun Khan, died facing down a suicide bomber at his base in Baqubah, Iraq. He was on his day off. He was the kind of guy who made sandwiches for his soldiers when there wasn’t time to get lunch, and went to work on his day off. You know, the son of immigrants. Ghazala and Khizr Khan dedicated themselves to the ROTC at his alma mater, the University of Virginia, becoming known as the Mom and Pop of the program.

You know what immigrant uncles and aunties like the Khans are like. Good luck trying to intimidate them. Khan says he’s lived under martial law twice in his life, so he’s not going to shut up when he sees it coming a third time. You might remember the iconic image of him at the Democratic National Convention, Ghazala at his side, brandishing the $1 pocket-sized US Constitution he was publicly offering to lend to Donald Trump.

The less dignified among us might have replaced it with a blunter gesture. Not Khizr Khan, but he got the point across. You could have told Trump to keep his mouth shut then—anybody could, even people who don’t know their immigrant uncles and aunties—but of course he didn’t. He even tried coming for Ghazala Khan. Good luck trying to tell her to be quiet.

Khizr Khan is not easily intimidated, but a gathering of elderly Nisei could do it. It wasn’t the size of the crowd filling Fisher Pavilion for the Day of Remembrance, which marks the anniversary of the 1942 order authorizing Japanese American incarceration. Nor was it the impressive collection of sponsors, including Densho, the Washington chapters of the Council on American-Islamic Relations and the ACLU, the Seattle Public Library, and more.

It was the presence of former incarcerees, Nisei veterans, and their families that gave Khan pause. Emphasizing the “sacredness” of the moment, he implored the audience to honor the veterans’ service as “a guiding light and a moral compass” in trying times. “When all is said and done, and the accounts are tallied,” he said, visibly struggling to constrain his emotion, “please know your account is in eternal surplus.”

His address was heartfelt, but also thoroughly researched, reviewing in detail the records of Nisei military service and the legal history of the incarceration—that “stain on American jurisprudence.” Khan is, of course, a highly educated man and an accomplished lawyer, as well as a gifted writer and an experienced orator, who spoke to nearly 200 communities last year.

Yet he is also a reluctant celebrity, subjected beyond any rational expectation to the most outrageous assaults on his character. His activism is, in essence, merely the act of mourning in public. A grieving father has little concern for people who can’t square his sacrifice and his patriotism with his religion, race, and accent. The tangible aura of humility and dignity surrounding Khizr Khan derives from an awareness that the price he’s already paid far outweighs anything the troller-in-chief can send his way.

Tom Ikeda, Densho’s Executive Director, has conducted over 200 oral history interviews on Japanese American incarceration, and knows the subject as well as anyone. Yet Ikeda was “astounded” by the depth of Khan’s research. After watching his DNC speech, Ikeda realized Khan was giving voice to what his grandparents, Suyekichi and Akino Kinoshita, might have been thinking when they were presented a flag for the death of their eldest son, Staff Sgt. Francis Kinoshita, killed in Italy during the war. A stunning photo of that moment, taken in camp, appeared in the program for the Seattle Center event.

Khan’s profound love for country, given his experience, is even more astounding. For Japanese Americans aware of how our community has been torn by unfortunate arguments over patriotism, it might even seem disconcerting. But Khan pointedly upheld principled resistance, in the person of Fred Korematsu, and Ikeda noted that his father-in-law, Frank Yamasaki, endured prison for refusing the draft—even though poor health would have excused him from service. As ACLU-WA’s Deputy Director, Michele Storms, stated, “Dissent is patriotic.”

The arts were also prominently featured. The acclaimed musician Kishi Bashi performed a virtuoso three-song set, drawn from his film-in-progress, Omoiyari, inspired by Japanese American history. A child of postwar immigrants, he said he related deeply to Issei and Nisei forced to repress their culture in wartime. Troy Osaki, a spoken-word poet who rocked last year’s program, returned via a short video, “Japantown on the Travel Ban.”

Solidarity, clearly, was the watchword. Varisha Khan, CAIR-WA’s Communications Coordinator, opened the afternoon by relating how, at age ten, a school play on Japanese American incarceration so resonated with her Muslim American experience that she knelt in prayer and promised God she’d dedicate herself to seeing that it would never happen again.

With emerging young leaders like Varisha Khan, the future of Asian America is in good hands. Even so, outrage fatigue may be a problem. The strong turnout for this year’s event was, nonetheless, noticeably down from the crowd that overflowed Fisher Pavilion a year ago. Seattle, this is no time to rest. As Storms reminded the audience, during the legendary 381-day Montgomery Bus Boycott, black women would add an hour of walking, each way, getting to their ten-hour-plus shifts as domestics. “If they didn’t get tired, how can I?” she said.

Khizr Khan remains hopeful. “I come from Charlottesville,” he said, and the room fell silent, recalling the infamous rally of torch-bearing white supremacists last August. Days later, Khan joined a march of local adults and children, reclaiming their streets and reasserting their values. “Look what happened,” he said. After the next election, Charlottesville had its first black woman mayor.