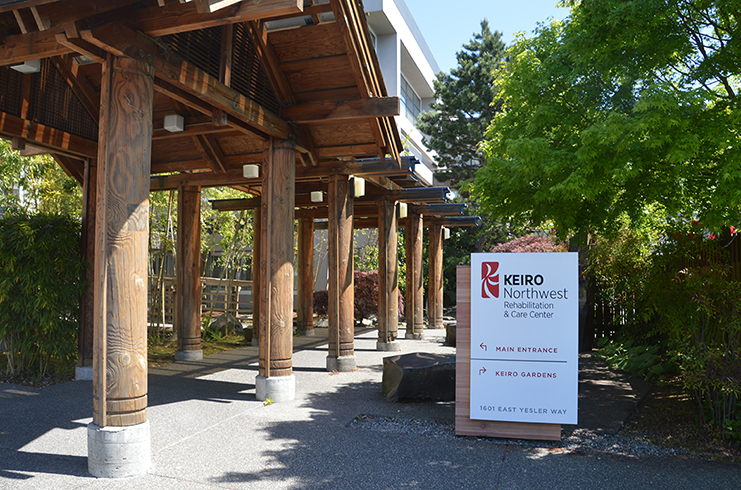 On May 7, staff at Keiro Northwest senior care facility told residents and their families that the nonprofit would be closing most of its programs by the end of the year due to financial problems.

As they delivered the message to the seniors, many in wheelchairs, Keith Akada was surprised by the reaction in the room. Akada’s mother is in long-term nursing care managed by Keiro.

“I would personally think that when, in a normal person’s life, if someone said that you’re losing your home, where you live, you’d hear a roar or the room would get restless,” Akada said. But no outcry could be heard. “Even my mom, she just didn’t have a clue what they were talking about,” said Akada. “You obviously could tell, they don’t comprehend what’s happening.”

Akada’s mother has Alzheimer’s disease, is incontinent and uses a wheelchair. She is one of roughly 100 people housed by Keiro who will now need to find somewhere else to stay by October 1, 2019.

Seattle’s oldest and largest Asian Pacific Islander (API) elder care facility, Keiro is closing its flagship Rehabilitation and Care Center in the Central District, ending its continuing education and travel program Nikkei Horizons, and ending its home care, transportation and catering services by the end of the year, according to a Keiro press release. It will continue to operate Nikkei Manor, its an assisted living facility in the Chinatown International District, and Kokoro Kai, an adult day program, according to a press release from Keiro.

Financial difficulties are the cause of the closures.

“We have done everything in our power to continue to deliver the full range of services offered by Keiro NW,” said Tomio Moriguchi, Board President of Keiro, in a statement. “But we cannot afford to lose money at our current rate and expect Keiro NW to survive. Diminishing access to Medicaid resources, combined with regulatory changes has hit us hard, and it looks like should expect more of the same over the coming years.”

Keiro started experiencing operating losses in 2011, said Fred Kiga, a board member of Keiro, partly triggered by the Medicaid Shortfall of 2008 to 2010. Keiro had a large number of residents on Medicaid, and lost $100 dollars per Medicaid patient per day, according to Kiga.

The organization tried to save money over the past year, but on May 8 the Board of Directors announced Keiro was ending most of its programs.

“Based on the individual resident, they have identified potential nursing homes that they would be eligible to go to, and the social workers are working with each of the residents to help find placement at an alternative,” said Kiga.

This is a challenge, Kiga acknowledged, because many residents are on Medicaid. Other nursing homes might be reluctant to accept them, as Medicaid reimbursement often does not cover costs, he said.

Akada’s mother is on Medicaid, and finding a new place for her is difficult. He is on waitlists for care facilities for her, while he waits for an official re-assessment of her needs. He worries that her being on Medicaid will make it less likely she will be accepted at another nursing home. “Are they being 100 percent truthful when their beds are full, or are they keeping it just in case they get a private pay?” Akada said.

Even if Akada finds a place for her, he believes she will suffer from relocation stress syndrome, a nursing diagnosis. “For a lot of those residents, to go from seeing Asian faces…hearing them trying to speak in their native tongue to give them more comfort, having Asian food prepared for them, to going to a totally different environment where hypothetically maybe it’s all Caucasian and they’re not receiving rice anymore as their meal — all of those things contribute to stress,” Akada said. “Even if the individual can’t voice it for themselves, they’re gonna feel that now. So it’s just terrible what’s happening.”

There was a time when Akada tried to take care of his mother at home, and it was stressful for her, him, and his daughters. The transition from home care to Keiro was difficult as well, and triggered cycles of negative Alzheimer’s symptoms.

Akada considers his mother lucky, in a way — she has him. He worries about what will happen to the residents who speak English as a second language, and whose family members are at work while important information is conveyed to them.

Akada praised the staff of Keiro, saying that many of whom work where they do because they care deeply about the residents. “It takes a special human being to take care of a stranger,” he said. “I tried to do it for my own mom, I couldn’t do it, much less if that was my livelihood and I depended on that, knowing that my job’s coming to an end.”

Keiro began in the 1970s as a senior care service for elderly Japanese Americans. It expanded to serve over 20,000. According to Kiga, 35 percent of Keiro’s guests and clients are Chinese, 30 percent Japanese, 20 percent Filipino and Southeast Asian, and the remainder non-API.

Kiga said Keiro has not had the broad base of support among API communities that other community advocacy organizations like ICHS or ACRS have, another possible factor in its financial problems. Though people of many backgrounds have contributed money to Keiro, “it’s still predominantly the Nikkei community that provides the bulk of philanthropic contributions,” Kiga said.

“This is a very difficult period for the API community and for many of the founding members of the Keiro nursing home,” said Kiga. At the same time, Kiga said it is important to celebrate Keiro’s successes.

“It truly did a remarkable job in serving the needs of the API seniors in providing care.

Keiro Northwest is holding a Town Hall on Tuesday, May 14 from 6 to 8 pm at the Stroum Jewish Community Center on Mercer Island to answer questions from Keiro residents, their loved-ones, and concerned community members.

Correction: This piece previously stated that residents of Keiro’s Rehabilitation and Care Center have 60 days to find new accommodation. In fact they have until October 1, 2019.