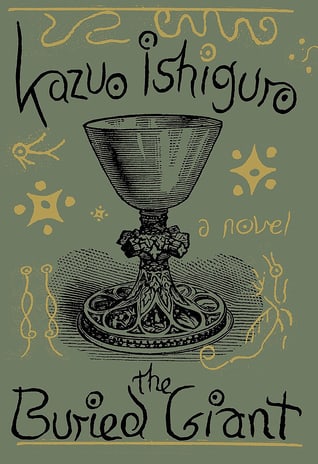 The Buried Giant by the Japanese-born British writer Kazuo Ishiguro has been impressive in its extensive reception by reviewers in Britain and in the United States. Ishiguro’s earlier novels and short fiction flit between European and Japanese landscapes.

The Buried Giant is set in the rise of Western Civilization in Britain, in pre-historic BC time, just after the Iron Age during which the use of iron was popularized and became prevalent. And the novel follows the journey of an elderly Briton couple, Axl and Beatrice, living in caves, in catacombs of chambers called “warrens,” where a small community of Briton families gather. The Asian element in this novel proper is, first, that the author, Ishiguro, is of Japanese descent and this new novel sheds light on several of his earlier works in which he digs the depths of WWII and post-WWII Asia.

Second, the novel is an allegory, metaphoric. The story in the novel runs on many themes. Take one on “memory and forgetting.” In the warrens and everywhere else, Axl and Beatrice travel to seek their lost son the memory of whom the couple struggle to remember, people are forgetful. They lack memories not just of distant past events, but even something that may have happened only an hour ago. Axl and Beatrice do wonder how they and others in this predicament can function at all.

How memory and forgetting together would play out each other is integral to many of Ishiguro’s fictional writings, whether it is the residual marks of WWII in Japan in An Artist of the Floating World, or the interplay of the mind to understand and the grasp of a place in another fictional world in The Unconsoled.

In an allegory, there are symbols. The Buried Giant is a hill, a grave of a “buried giant,” an unusual creature, just right outside of the warrens right at the outset of Axl and Beatrice’s journey. This buried giant is the “past” that they cannot remember, but also the past that hangs on them in dread and doom.

When they go past the buried giant, they track their way into the past. The fog and the “mist” that circumscribe this whole country present the “forgetfulness” of the human creatures who prod on in these territories.

An allegory perhaps owns its “moral.” The narrator hovers above the novel almost in apology and guilt, “I am sorry to paint such a picture of our country at that time, but there you are.” The narration may seem to be action-adventures, but it is a sense of plight that befalls Axl and Beatrice from place to place, one challenge after another. Memory and forgetting appear to be the human dilemma, and this theme is a story worth telling.

In the allegory, glorious creatures, a bit magical like other sorts of British creatures—Harry Potter’s world—emerge, creatures like ogres, monks, she-dragon, knight, warrior, Sir Gawain of the King Arthur legend, humans—Saxons and Britons. They are the cast of the novel. Yet the creatures as such do not dwell in a Harry Potter world. The charming cast would work, if not for the people trapped in the “treachery” and betrayal of the fabled war between the Saxons and the Britons in Ishiguro’s imagined realm just following the King Arthur epoch.

As Ishiguro’s fictional narratives always compel the mind to work—complex, layered fiction to be consumed and unraveled, The Buried Giant may be an intended journey of the human will to know and to remember. As the novel draws interests in its inventiveness, it also refrains from the depths of other of Ishiguro’s masterworks.