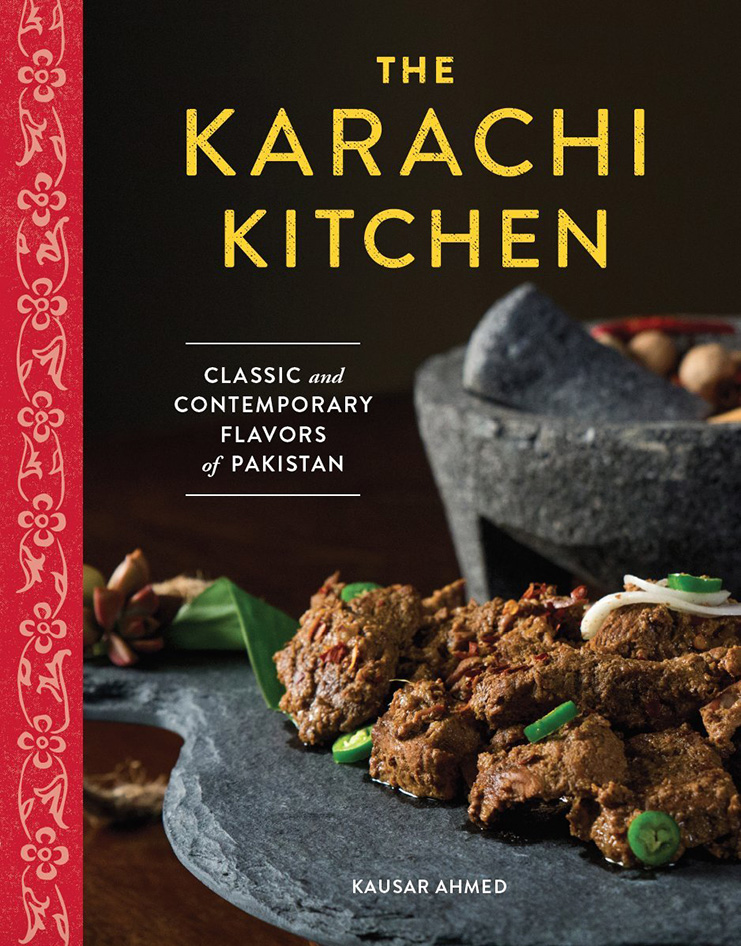 Pakistan.  Though the world’s sixth most populated country, the Islamic Republic can still be shrouded in mystery – unfamiliar, remote and unexplored –for those with little or no connections to this multi-ethnic South Asia nation.  The country was created in 1947 when the British partitioned India; Urdu and English are the official languages.  Karachi, known as the City of Lights in the 60s and 70s for its vibrant nightlife, is the capital of the province of Sindh.  Not only the industrial and financial center, but it is also the cultural, economic, philanthropic, educational and political hub of the country.  With well over 14 million people, Karachi is the most densely populated city in Pakistan – and the fifth most populous municipality in the world.

A “trade hub where South Asia collides . . . (it is) a dynamic, multi-lingual city extremely rich in culinary and cultural history” whose boldly flavored food is an amalgam of Indian, British, Central and South Asian, Middle Eastern ingredients, styles and preparations.  With its history of numerous former empires, dynasties, faiths and migratory pasts, Pakistan draws on diverse entities that include Hindus, Indo-Greeks, Muslims, Turco-Mongols, Afghans, Sikhs and others (such as the royal kitchens of 16th century Mughal emperors) that have shaped the country’s modern-day food traditions.

Given the opportunity to review author Kausar Ahmed’s recently published cookbook, The Karachi Kitchen, I hesitated . . . at first.  On what authority did I have to deal with a subject of a country so unfamiliar to me?  On second thought, having traveled extensively – and frequently – to India (and aware of the significant connection between Pakistan and Bharat), I shrugged away my initial doubt and plunged ahead.

Credentialed with foodie DNA, firmly established within my cellular framework, I channeled my inner lust for plated victuals, grabbed the edible-fare gauntlet and bodaciously charged full speed ahead.  A hard-core, hedonistic glutton, especially where people, countries and travel are concerned, my hyper-carnal thoughts invariably turn to “good eats”.  That, and curiosity, were motivation enough for me to take on the challenge of Karachi and its kitchens.

As I waited for the book to arrive, critical concerns began to ping pong through the recesses of my simple-in-Seattle mind: “What do the people of Pakistan eat?”, “Will I like it?”, and “How many Michelin stars might apply to the cuisine?”.  I pondered.  I paced.  The book arrived: 87 pages – a quick read.

On closer examination, along with pot-and-pan experimentation, my questions were answered in rapid succession: Delicious meals; Yes, indeed; and enough to seriously whet my appetite for second helpings.  Victory is mine, I chortled, greedily thumbing through the book again.

The Classic and Contemporary Flavors of Pakistan in Ahmed’s Karachi Kitchen originate from “beloved recipes from Pakistan and the surrounding region that are close to (her) heart.”  They feature both traditional as well as contemporary dishes drawn from her childhood years dining with family and friends, and wisdom derived from her cooking experiences as a wife and mother.

Born in Karachi, the author is a freelance food stylist, chef and cooking instructor with over two decades of experience in the culinary arts.  She is also known for her work with high risk communities of women and youth in the Karachi area.  Ahmed founded Kitchen Craft in 2009, an organization that provides impoverished families free nutrition, and cooking workshops that promote healthy eating and hygiene habits.  It is an endeavor, she continues to support.

Approximately 97% of the people of the country are Muslim, who practice the country’s official religion of Islam.  Muslims observe Halal dietary guidelines that restrict the consumption of pork and alcohol.  Alternative substitutes for swine, boar, pig or hog include beef, chicken, lamb and fish.  Vegetables, fruit, rice and dairy products are a regular part of the diet.  However, there is little made of the omission of pork and alcoholic beverages in Ahmed’s cookbook.  So tempting are the recipes and full-page color photos that these exclusions easily escape notice.

The 33 uncomplicated, easy-to-follow recipes provide a scant peek at what Pakistani cuisine has to offer.  They are grouped into four compact chapters that include: Toppings and Sauces (6 recipes), Sides and Snacks (8 recipes), Main Courses (11 recipes), and Desserts (8 recipes).  Selections from each group can be readily combined to form the basis of a full course dinner menu for those inclined to undertake an enterprise of this sort.

Although the ingredients used in the recipes are far from exotic, and are readily found in most local supermarkets, plan on expanding the space in your kitchen to accommodate the many spices and seasonings called for – if this is your first foray into South Asian cooking.  While the initial outlay in purchases for the numerous spices needed can be awe inspiring, the various recipes repeatedly call on their use time and again, ensuring that your money will be well spent and worth the investment.

For Ahmed, who now makes her home in Seattle, this is her first cookbook.  Hopefully, it will not be her last.  For those who choose to undertake Karachi cookery in their kitchens, Maze karein! (Urdu for Bon Appetit).