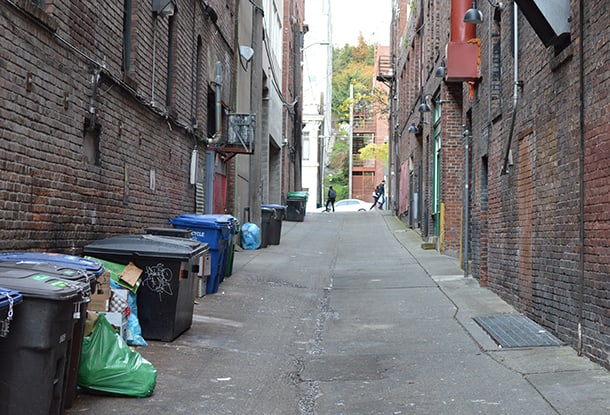 Richard Chang, who co-owns Kau Kau Barbeque Restaurant with his wife, says he plans to sue Seattle Public Utilities (SPU) after the agency issued him a drainage violation in July.

The violation, which comes with a fine of $2,000, was issued after a Seattle Clean Streets coordinator allegedly witnessed employees from the restaurant cleaning a food waste container into an alley storm drain as they attempted to alleviate a foul odor that was emanating from that area, as first reported by Northwest Asian Weekly. The incident occurred on June 5.

Their attempts to deal with the problem did not align with the protocol of SPU. Photos taken by the coordinator show someone cleaning sludge from a recycling bin by placing it into the inlet of an alley storm drain, according to the Notice of Violation.

Chang later told an environmental compliance inspector that he cleaned the bin with water because of complaints over the smell. He believed the foul odor was due to illegal dumping, according to the notice.

Chang, who has owned Kau Kau BBQ since the early 1970s, says he has never had to pay any fines, and believes this incident is the fault of the Chinatown International District Business Improvement Area (CIDBIA) and the city.

“Not only are you not working with the community, you are actually making us look really bad in the community,” Chang said. “We shouldn’t be fined for this at all… I don’t think the city really gives a damn.”

He and his wife, Lynn Eng-Chang, contacted the CIDBIA about the offensive odor, but did not receive a quick enough response.

“We’re paying the BIA every year for their service, but they’re not helping us,” Chang said.

SPU has been working with the CIDBIA since 2013 on outreach and education regarding initiatives, including their Clear Alley Program, which aims to “increase the attractiveness of alleys for pedestrian use and allow better alley access for business services, such as deliveries and possible expansion of commercial activity,” according to a statement from SPU.

The CIDBIA did not respond to multiple requests for comment.

In December 2016, the same environmental compliance inspector, with the help of a consultant, “explained the importance of keeping materials such as food waste and cooking oil out of the drain” during an inspection of Kau Kau BBQ, according to the July notice. They gave the owners the phone number for the SPU’s Operations Response Center and told them how to report a spill.

The inspector revisited the restaurant in May 2017 in response to a spill reported the previous day and made clear, once again, why it was important to keep waste out of the drain, according to the notice.

“In most cases, education and technical assistance are the tools that are used to gain compliance,” SPU said in their statement. “However, in some cases, it may be necessary to utilize enforcement to persuade a property or business owner to come into compliance with the Stormwater Code.”

On October 9, Chang was sent a letter by SPU that reduced the penalties for the violation from $2,000 to $1,000, but that’s “still not good enough” for the business owner. This decision, which was signed by John Holmes, the interim deputy director of SPU, is final.

Chang wants to set an example for the community by bringing a case to Seattle court.

“I don’t want any other business to have to go through what I go through,” Chang said. “If we don’t fight it, then people will always look, the city, police officer, or whatever that might be, they will look down on us and say ‘let’s just step on them,’ like cockroaches.”

Chang, who owns one of the older restaurants in the Chinatown International District, understands that paying for an attorney and legal fees will likely cost more than the fine, but he wants to set a “precedent.”

Chang thinks much of the community stands with him in support of his attempts to bring attention to the CID’s struggles as it tries to interact with the city. He says he started a petition that has been signed by at least 60 community members.

“Our district and our community has been kind of forgotten,” Chang said. “Kind of got bullied by the city.”

A court date has not been set, according to Chang.