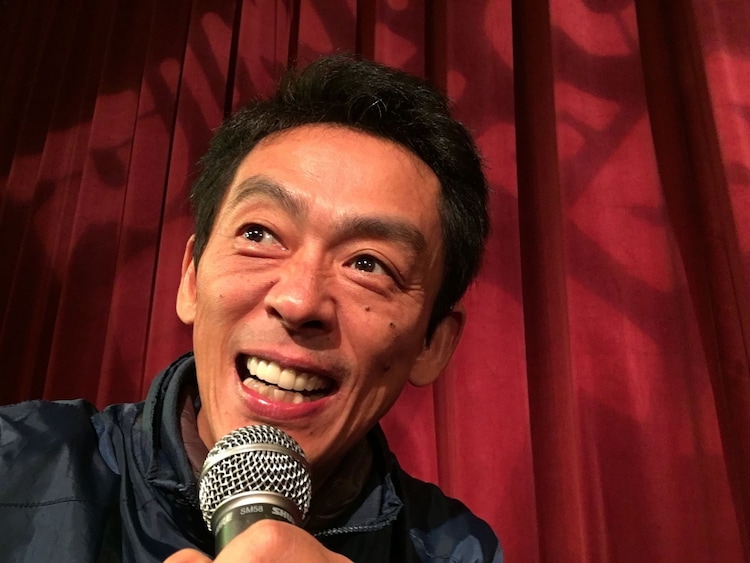 On November 1 and 2, Katsura Sunshine will appear at the University of Washington for Japan’s public broadcaster NHK’s taping of his show Dive Into Ukiyo-e. The word ukiyo-e translates to “floating world” and was a popular art genre during Japan’s Edo period of 1603-1868. Mostly created with hand-carved wooden blocks, the printed illustrations usually depicted daily life during a relatively peaceful time following Japan’s brutal civil wars—when citizens could once again engage in pleasurable pursuits.

In rakugo, a lone kimono-clad storyteller kneels on a cushion on the floor using only a fan and tenugui (hand towel) for props. Both come in handy for keeping sweat at bay and, according to Katsura, are what every Edo period man carried when he went out. In this setting, Katsura explains, the performer “relates humorous stories passed from master to apprentice for as much as 400 years; stories that are like a slideshow, usually fictional anecdotes.”

Katsura, whose first language is English, also speaks French and Japanese which he perfected while living in Japan for 16 years—three them apprenticing with rakugo master Katsura Bunshi VI.

Growing up in Canada, Katsura always enjoyed “ancient Greek comedies and dramas, musicals” and “old, traditional stuff,” he says, and dreamed of working in theater on Broadway or London’s West End. But now, he embraces rakugo, contending that his show is the same whether in Japanese or English.

“What I’ve come to learn is that rakugo humor is universal,” Katsura clarifies. “It’s the same in Canada, U.K., Ghana, Senegal, Gabon, South Africa. They’re things we all recognize—an arguing couple, a thief who can’t steal. The root of the stories transcend culture and language.”

Above all, Katsura loves entertaining an audience. “They get caught up for an hour and leave with Japan in their hearts,” he says.

Meanwhile, Zenjiro from Tokyo will show off his Western-style stand-up repertoire in an attempt to beat out 32 competitors at the Seattle International Comedy Competition. Twenty-two shows, spanning 26 days, will eliminate comics until five finalists are (pun intended) left standing.

Besides his stage routine, Zenjiro has hosted numerous Japanese television shows including TV no Tsubo, Genki-ga-deru TV, and ZeZeZe no Zenjiro. He’s also made appearances in the films The Bleep Brothers, Minami no Teio, Inatian Man, and Kodomo no Omocha.

Because Japanese humor is unlike American, switching from one style to another seems complicated. But Zenjiro disagrees.

“The main difference,” he says, “is that Japanese people rarely take sarcasm and irony as humor. They prefer more straightforward or absurdist jokes, so I have to write totally different types of jokes in different languages. I don’t translate my jokes. When I perform, I switch from Japanese comedy to Western comedy just by switching the language.”

“It’s easy,” he insists, “because I speak ‘Japanenglish’ in America and, it’s not so different from Japanese, you know. My Korean is also a bit like Japanese that Korean people happen to be able to understand.”

With rakugo still a popular tradition in Japan, Zenjiro agrees that Western-style stand-up is a difficult art form to pursue.

“When it comes to solo comedy, Japanese audiences are still used to rakugo,” he says. “But there is a stand-up comedy circuit for English-speaking expats, and now we have Japanese stand-up shows, too. It’s becoming more popular.”

In one of his zany routines, Zenjiro dresses like a samurai, holding his stomach and moaning “hara kiri.” Why is that funny?

Zenjiro explains, “The samurai carefully anesthetizes his stomach and stabs himself. He faints because his intestines are so smelly, and he dies. Or, the sword penetrates his body and stabs a guy behind him.”

Asked how he plans to celebrate if he wins the comedy competition, Zenjiro replies, “I would love to throw a pot party, but I can’t because I have to go back to Japan soon for solo shows. If I win, a TV station in Japan will air a documentary about me, called Zenjiro in America. Of course, me winning in Seattle should be the climax.”

Whether these funny guys are sitting or standing, both Katsura Sunshine and Zenjiro are worth seeing.